UK Cypriots once again show their support for a free, united Cyprus on 15 November 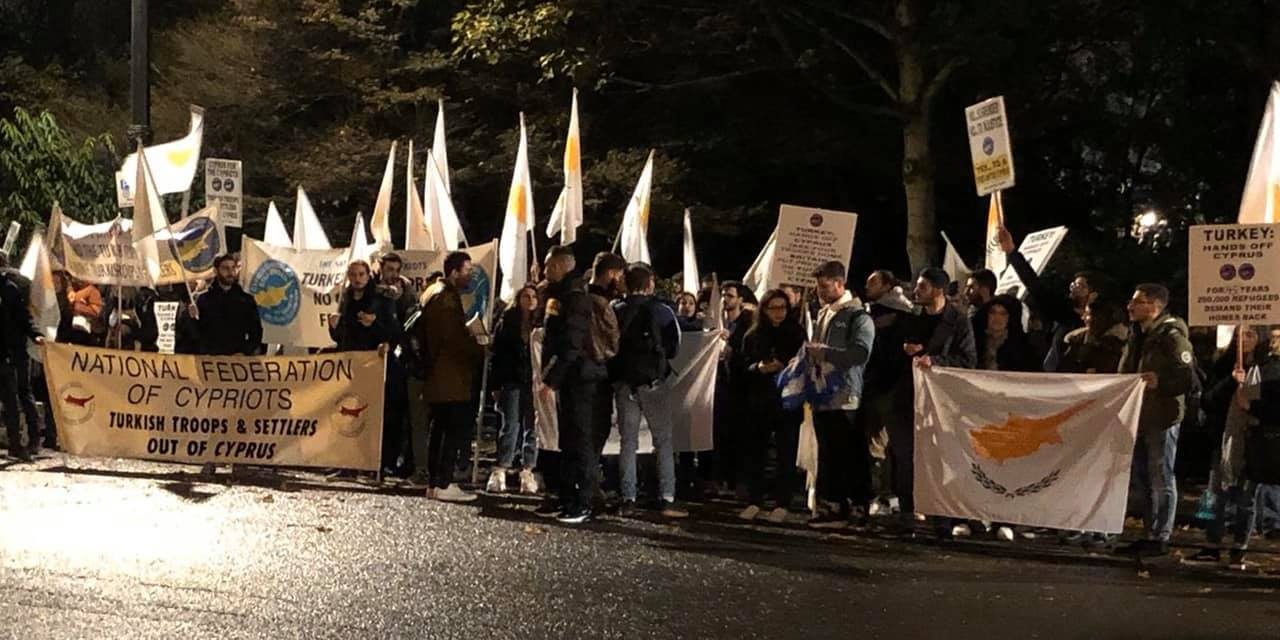 36 years to the day since the so-called ‘TRNC’ illegally and unilaterally declared its independence, UK Cypriots once again took action to demonstrate their support for a free, united Cyprus; the reversal of the illegal unilateral declaration of independence; and end of the occupation of more than a third of Cyprus by Turkey’s military.

Letter to the Ambassador of Turkey
To highlight the continued injustices by Turkey in Cyprus and the desire of the UK Cypriot community for reunification, the President of the National Federation of Cypriots in the UK, Christos Karaolis; the President of POMAK, Andreas Papaevripides; the President of NEPOMAK, Christos Tuton; student representatives; and Officers of the Federation delivered a letter to the Ambassador of Turkey. The letter, signed by the Federation’s President, calls on Turkey to accept that the anachronistic system of guarantees cannot continue and that Turkey’s occupying troops must leave Cyprus. Moreover it also urged Turkey to embrace the opportunity presented by the upcoming meeting between the UN Secretary General, President Anastasides and Mr Akinci, rather than continually undermine efforts to restart negotiations. The letter also criticised the Government of Turkey for refusing to let Cypriots decide their own fate and for imposing “increasingly authoritarian policies” that threaten the very existence of the Turkish Cypriot community – something that scares all communities of Cyprus.
Letter to Prime Minister Boris Johnson
As part of the Federation’s regular correspondence with the UK Government on the Cyprus issue, Mr Karaolis also wrote a letter to the Prime Minister. The letter emphasised that the UK, as a guarantor power, can play a positive and constructive role towards the reunification of Cyprus. Amongst other things, Mr Karaolis urged the UK Government to publicly call for the abolition of the guarantor system and for the removal of foreign troops from the Republic of Cyprus, which he said would be a “significant and valuable contribution” by the UK Government.
The Demonstration
Speaking at the demonstration, Mr Karaolis said that “Turkey’s intransigence is the biggest obstacle to a free, united Cyprus that will benefit all Cypriots and ensure prosperity for the island.” Mr Karaolis condemned Turkey’s recent aggressive actions towards Cyprus, such as the warships and drillships that Turkey has sent into Cyprus’ Exclusive Economic Zone to obstruct Cyprus’ right to exploit its natural resources. He also expressed sympathy and solidarity with the Kurds of northern Syria who are currently living through yet another illegal invasion and occupation by Turkey.
UK Cypriots and students travelled from across London and from as far as Manchester, Birmingham, Reading, Essex, Surrey and Brighton to show their support for a free, united Cyprus
Recent Posts
Upcoming Events