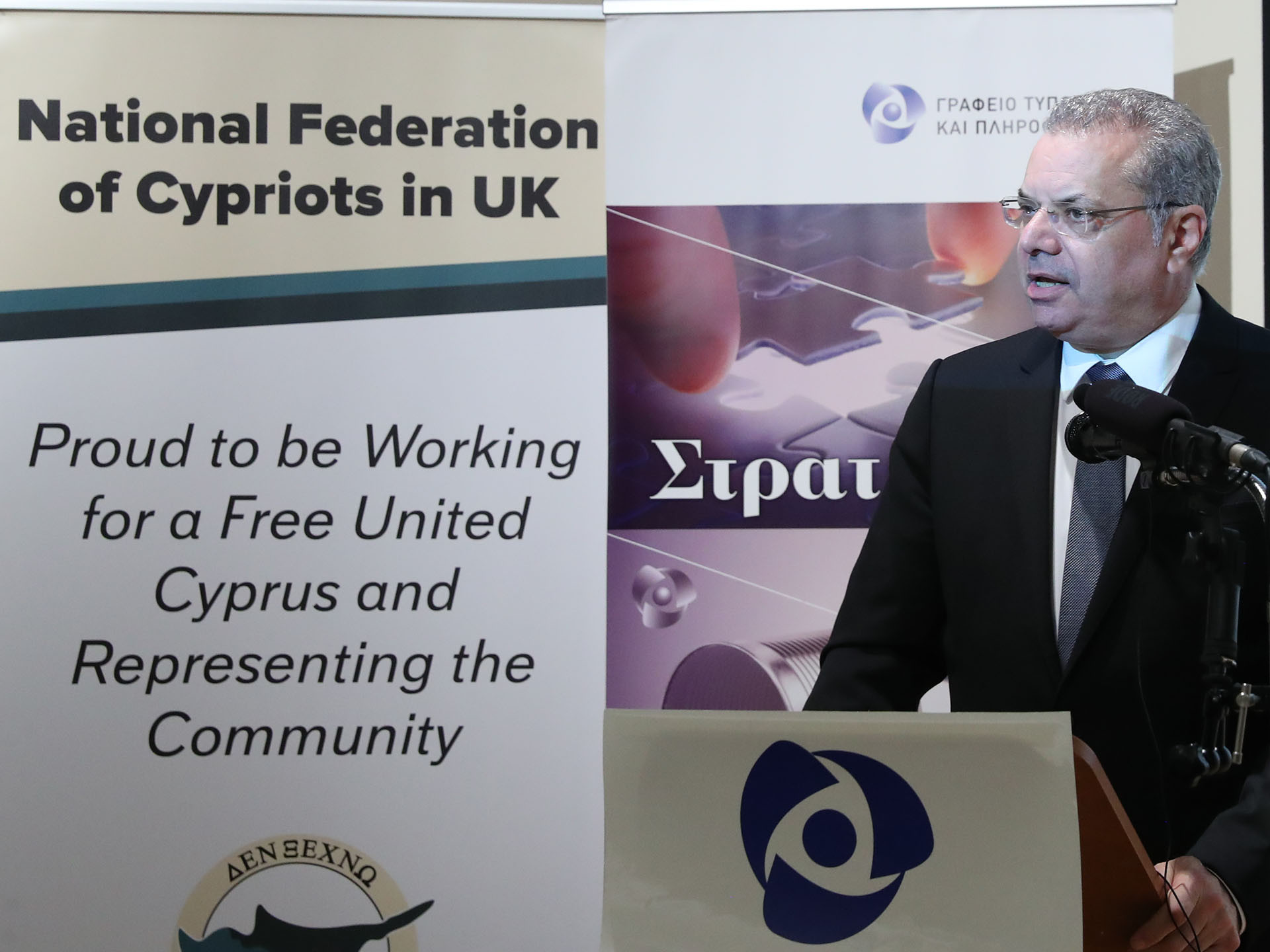 On Thursday 16 January 2020, the National Federation of Cypriots in the UK hosted an exhibition of photographs taken by Adonis Christoforou and prepared by the Press & Information Office of the Republic of Cyprus (PIO) titled, ‘Photographic evidence from the recent history of Cyprus’. The exhibition featured photographs from the early years of the Republic of Cyprus and was officially opened by the newly appointed Minister of the Interior of the Republic of Cyprus, Mr Nicos Nouris. Welcome addresses were also given by Ms Sophie Michaelides, Director of the PIO; Mr Christos Karaolis, President of the National Federation of Cypriots in the UK; and Mr Adonis Christoforou, the photographer.
The Minister of the Interior expressed his delight to be opening the exhibition alongside the UK Cypriot community. He said that the exhibition “captures the eventful history of our long-suffering island, as well as moments that have defined our story as Cypriots. The photographs, and what they document, constitute a reference point and guide for future generations… whether what they represent is positive or negative, it is a part of our lives, our memories, our country or our history” The Minister went on to say that “the present day Republic of Cyprus should not be under occupation by Turkey, nor divided… the current status quo in Cyprus is completely unacceptable and illegal.”
Ms Sophie Michaelides, Director of the PIO, said that the work carried out by the P.I.O. is historically significant and important in preserving Cyprus’ cultural identity and collective memory. She said that the exhibition and similar archival evidence “link the past to the present and the future of our country and our people.” Ms Michaelides also commended photographer Adonis Christoforou for his work and contribution towards telling the national story of Cyprus. 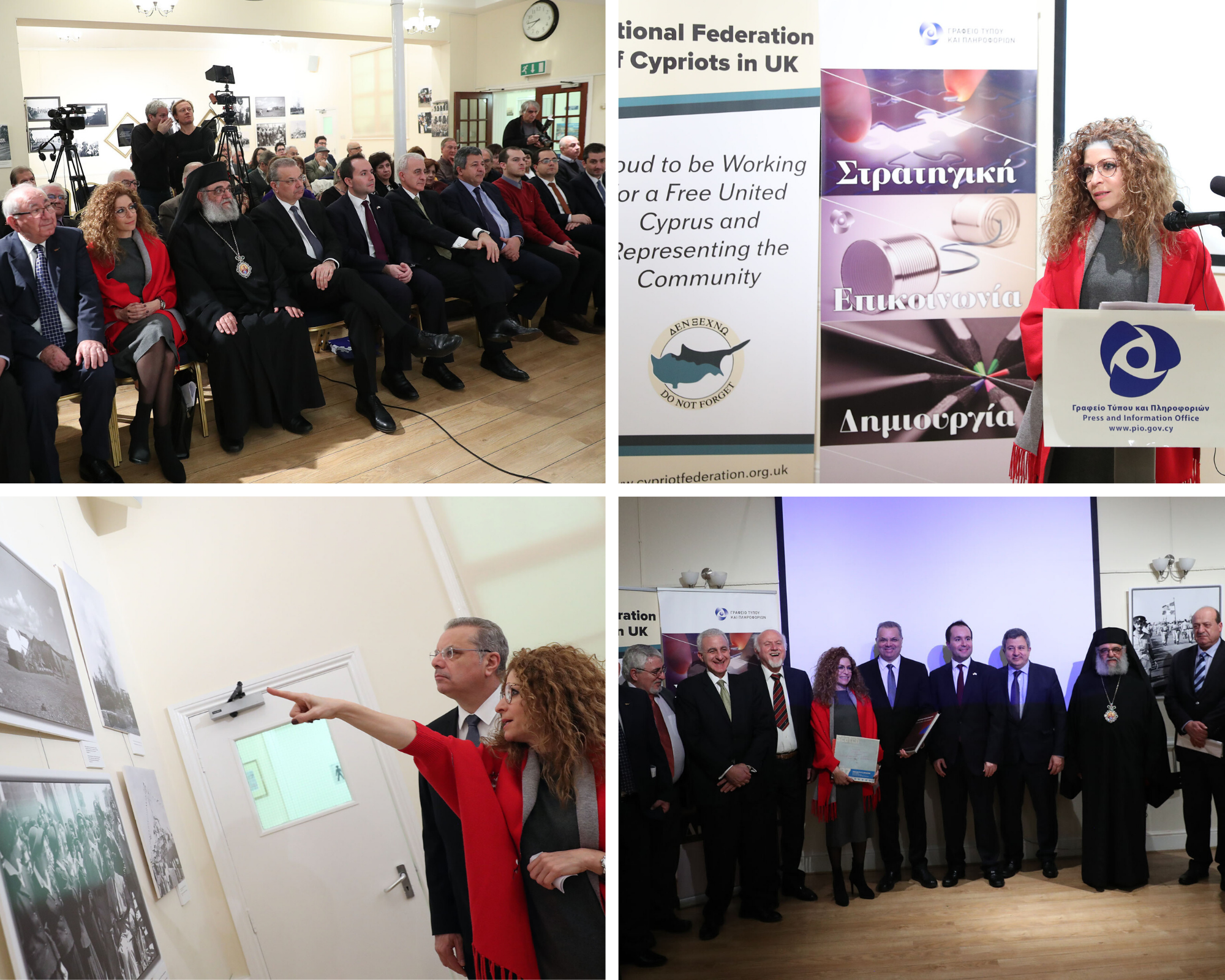 The President of the Federation, Mr Christos Karaolis, praised the important work of the PIO in providing the diaspora with information about the Cyprus issue and other news from Cyprus. Speaking about the exhibition, Mr Karaolis said that, in the context of 2020 being the 60th anniversary of the Republic of Cyprus, “some people here this evening will have lived through these events and this exhibition will trigger memories of the early days of the Republic of Cyprus. Whilst for younger generations, the exhibition will provide an opportunity to visualise the defining moments in Cyprus’ national story… As such, tonight’s exhibition allows us to reflect on the challenges of the past as we look ahead to what the future of our island will be.”
Following the welcome addresses, members of the public had the opportunity to view the exhibited photographs and enjoy a traditional Cypriot reception. Mr Nouris, Ms Michaelides and Mr Christoforou were also presented gifts by the Federation.
In attendance were, H.E. the High Commissioner of the Republic of Cyprus, Mr Andreas Kakouris; the Consul General of the Republic of Cyprus, Mr Theodoros Gotsis; Mr Christos Avraamides, Ms Antonia Socratous Pedone (both PIO); Bishop Athanasios of Tropeaou; President of POMAK, Mr Andreas Papaevripides; President of NEPOMAK, Mr Christos Tuton; Vice-Presidents of the Federation, Mr Bambos Charalambous & Mr Michael Ellinas; Councillors Roberto Weeden-Sanz & Anne Hutton (both Barnet); Executive Secretaries of the Federation, Mr Andreas Karaolis & Mr Adrian Patsalos; and representatives of the Federation’s Secretariat and its member associations.
Recent Posts
Upcoming Events