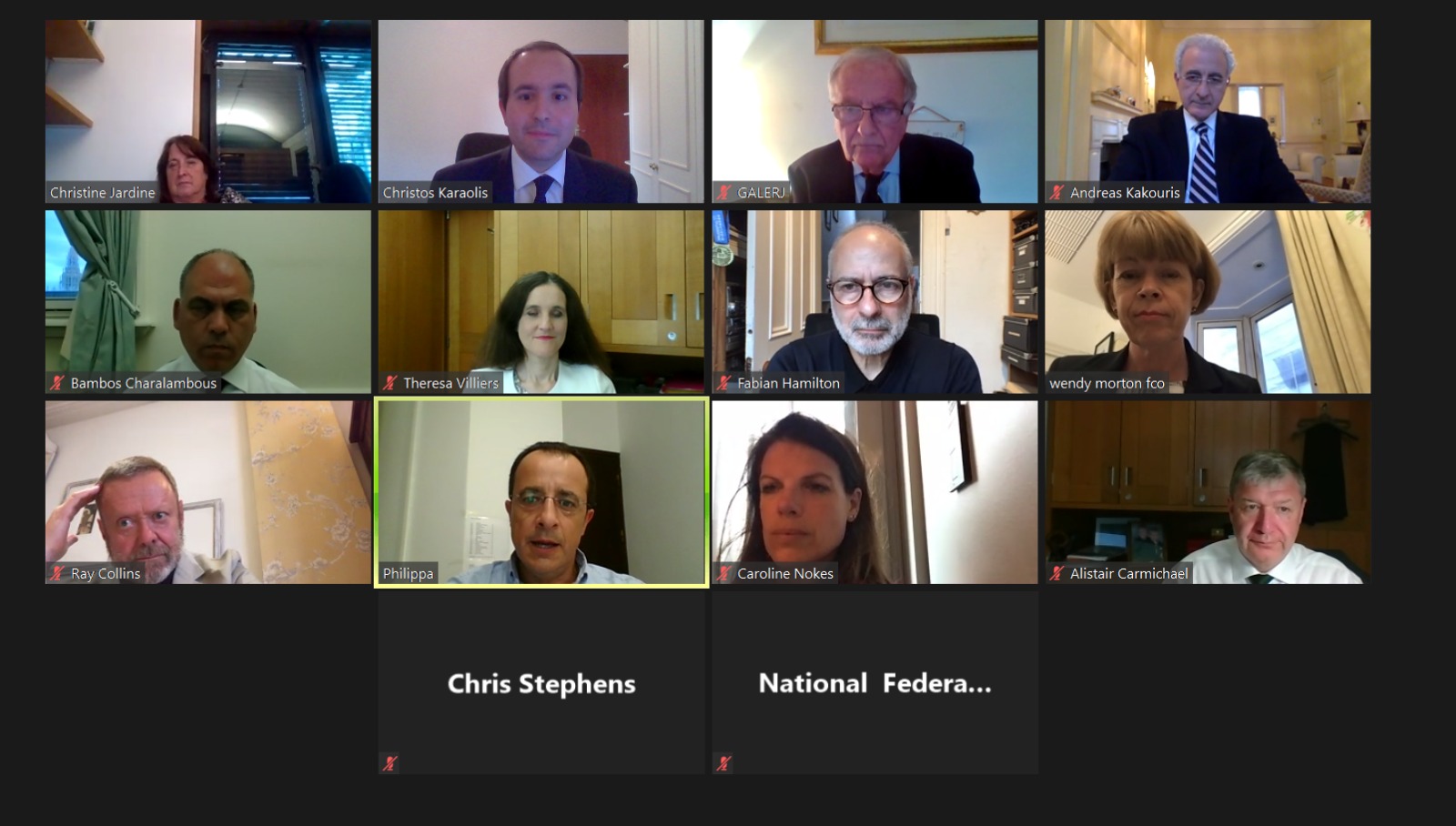 On Tuesday 14th July 2020, the National Federation of Cypriots in the UK and the All-Party Parliamentary Group (APPG) for Cyprus held their annual parliamentary meeting on Cyprus, titled ‘Cyprus@60: Opportunities, Challenges, Prospects for Reunification’. The event, which is held every year to commemorate the tragic anniversary of Turkey’s illegal invasion of Cyprus on 20 July 1974, was held virtually this year due to the COVID-19 pandemic. This year’s event also offered an opportunity to reflect on 60 years of Cypriot independence. Members of the public watched a live stream of the event on YouTube. The Foreign Minister of the Republic of Cyprus, H.E. Mr Nikos Christodoulides, briefed the APPG and members of the UK Cypriot community on the latest developments on the Cyprus issue, as well as other developments in the Eastern Mediterranean region.

VIDEO: Watch the event as it happened on YouTube

The Minister of Foreign Minister of the Republic of Cyprus, Mr Nikos Christodoulides, began his remarks by outlining the key principles of Cyprus’ foreign policy over the last 60 years. He explained that Cyprus has always had a positive agenda and has never sought a “negative” foreign policy. He also noted that Cyprus strives to cooperate with its neighbouring countries on common principles and forge close partnerships across a wide range of fields. 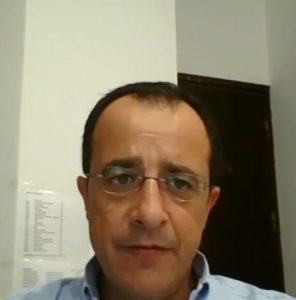 Despite Cyprus’ positive work within the region, Mr Christodoulides noted that Turkey was a “spoiler” that was “pursuing a neo-Ottoman vision in the region”. He said that, even during the COVID-19 pandemic, “Turkey is escalating its provocative actions and systematically promotes a multifaceted strategy to implement its hegemonic, revisionist vision for the region, in clear violation of international law”. He added: “The Turkish leadership seems to be utilising the international distraction caused by the pandemic in order to intensify and further promote its plans.”

On the latest developments in Cyprus’ Exclusive Economic Zone (EEZ), the Foreign Minister outlined the most recent of Turkey’s illegal incursions. He explained that a Turkish drill ship was currently operating just 51 nautical miles off the southwestern shores of Cyprus, which amounts to the sixth illegal drilling in a row in less than a year. He said that Nicosia expects the UK Government “to convey firm and clear messages [to Turkey], both in public statements but also in contacts with officials”.

The Foreign Minister said that the international community must act in a “firm manner to Mr Erdogan’s increasingly authoritarian, erratic behaviour,” and he welcomed the increased restrictive measures taken at EU level.

The Minister also stressed that “in the current poisonous climate of provocations and aggression it cannot be expected that result-oriented negotiations for the Cyprus problem can resume”. He assured the Parliamentarians that Cyprus remains “strongly committed” to efforts to reunify the island and its people and that it remains ready to resume negotiations from where they have stopped. 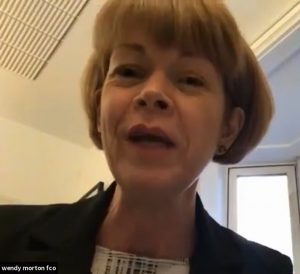 Ms Wendy Morton MP, Minister for European Neighbourhood and the Americas, addressed the meeting by noting that the strong bilateral ties between the UK and the Republic of Cyprus were demonstrated through close cooperation on multiple challenges faced during the COVID-19 pandemic and by the non-military development agreement on the Sovereign Base Areas (SBAs).

On the Cyprus issue, Ms Morton said that “recent developments underline the importance of a comprehensive, just and lasting settlement of the Cyprus issue, based on the internationally accepted model of a bi-zonal, bi-communal federation.” She further stated her hope that “all parties will redouble their efforts towards a settlement.”

The Federation President, Mr Christos Karaolis, emphasised the tragedy of the fact that the Republic of Cyprus has “only been free and united for less than a quarter of its entire existence”. Mr Karaolis said, “what we want is simple, fair and rooted in international law – a free, re-united Cyprus that is based on the relevant United Nations Security Council Resolutions and High-Level Agreements.”

Mr Karaolis also spoke of the close relationship that Britain and Cyprus share and said that “in a world where it [the UK] is not a member of the European Union, it can safely look towards the Republic of Cyprus as a reliable and predictable partner.” He concluded by paying tribute to all Presidents of the Republic of Cyprus since 1960 for “their immense contribution to Cyprus’ growing national story.” He also expressed gratitude towards all the British parliamentarians who have opposed the occupation of Cyprus and stood beside Cyprus during its first 60 years of independence.

Sir Roger Gale, Chair of the APPG for Cyprus, paid tribute to the “non-party political, incredibly strong friendships that have been built over [over 60 yeas of the Republic of Cyprus.]” Sir Roger also said that “46 years [of occupation] is far too long” and that British parliamentarians “will stand with you for however long it takes”. He also said that Turkey’s actions in Cyprus’ EEZ “cannot be allowed to continue” and have rightly been condemned by the UK.

Mr Fabian Hamilton MP, Shadow Minister for Peace and Disarmament for the Labour Party, and the party’s spokesperson on Cyprus, expressed support for the reunification of the island as a bizonal, bicommunal federation, as a “normal and viable” state, that does not require “outdated guarantees”.

Mr Hamilton also acknowledged that a just solution must provide for the right of return of refugees, from both communities, to their homes and properties lost in the invasion. He castigated Turkey’s drilling operations in Cypriot waters as a “wholly unacceptable act of aggression”.

The Liberal Democrats’ foreign affairs spokesperson, Alister Carmichael MP, lamented the fact that the Cyprus issue doesn’t get the attention it should. He also stated that “anybody looking for political division has come to the wrong place” because all parties want to see a bizonal, bicommunal federal Cyprus that is rooted in international law.

Mr Chris Stephens MP, speaking on behalf of the Scottish National Party, highlighted the missing persons of issue and said that “Turkey needs to start respecting international law”. He explained that he is a longstanding critic of Turkey’s aggression, particularly towards the Kurdish people. He condemned Turkey’s illegal drilling in Cyprus’ EEZ and also the recent “illegal and unregulated” fishing in Cypriot waters.

Mr Bambos Charalambous MP, Vice-Chair of the APPG for Cyprus, said he wants to see a resumption of reunification negotiations but noted that “we can only do that if there is good faith, and Turkey’s actions show anything but good faith.” Mr Charalambous added that Turkey must be held to account for its breaches of international law. He strongly condemned Turkey for its lack of understanding of sensitivities, highlighted recently in the decision to turn Hagia Sophia into a mosque.

Mr Charalambous also expressed gratitude towards the National Federation of Cypriots in the UK for their work in supporting the UK Cypriot community during the COVID-19 pandemic.

Ms Christine Jardine MP, Vice-Chair of the APPG for Cyprus, reaffirmed the unity of all parties in support of the reunification of Cyprus. She said that she remembers the invasion of Cyprus and said that it “seems inconceivable” that the Cyprus issue has yet to be resolved.

The event was closed by Ms Theresa Villiers, MP for Chipping Barnet, who said it has been a privilege to support Cyprus for so many years and that she would always campaign for justice in Cyprus. She hailed the “huge progress” the country has made over 60 years, describing it as a prosperous country which is a “pillar of stability in an unstable region”. Ms Villiers expressed her shock at hearing about Turkey’s approval of plans to develop and inhabit Famagusta. She also strongly condemned Turkey’s actions in Cyprus’ EEZ and repeated the UK Government’s stance against Turkey’s drilling.

Ms Villiers concluded by expressing sadness at the decision to convert Hagia Sophia, “one of the greatest monuments ever created”, into a mosque.

The virtual event was also attended by the High Commissioner of the Republic of Cyprus to the UK, Andreas Kakouris; Ms Caroline Nokes MP, Vice Chair of the APPG for Cyprus; and Lord Collins, Shadow FCO Minister.