Celebrating 60 years of the Republic of Cyprus 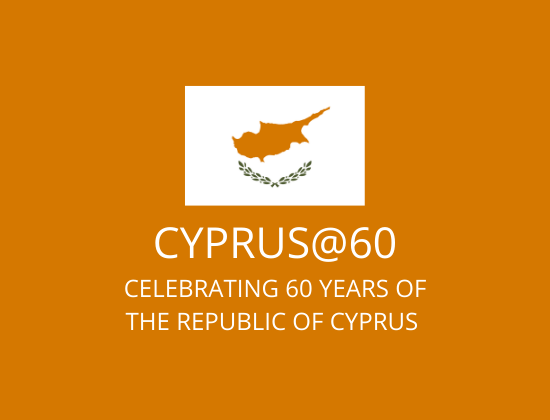 Today marks the 60th anniversary of the establishment of the Republic of Cyprus. To mark this occasion, we asked for messages from Cyprus and the UK. On this historic milestone for Cyprus, we are proud to share messages from H.E. the President of the Republic of Cyprus, the Presidential Commissioner for Diaspora Cypriots, the UK Government, Opposition parties and the APPG for Cyprus.

Message from the President of the Republic of Cyprus

On this occasion, the President recorded a special message for the Cypriot diaspora. In the video he says:
“As we celebrate this anniversary, we honour and pay tribute to all those who fought and sacrificed their lives to end colonialism and establish the Republic of Cyprus….This year, finds our country in a particularly difficult situation, as we are undoubtedly going through one of the most critical periods of our 60 years of existence.
“It would be amiss on my behalf if I did not extend my sincere gratitude and appreciation to the Cypriot diaspora”.

The Independence Anniversary of October 1st, is certainly one of the most important celebrations in our national calendar. It carries a meaning and significance that transcends time, which is still relevant today: The constant effort of a small island-country to meet the adversities and challenges in its turbulent region and to survive against the aggressiveness of its powerful neighbour. Indeed, 60 years later, we remain proud to live in a country that not only survived, but thrived through the past decades, against all odds.

I cannot overemphasize enough how indispensable the contribution of our Diaspora has been all these years, in raising awareness on the criminal injustices committed by Turkey in Cyprus. Their contribution has been indeed instrumental in mobilizing the interest and the involvement of key policymakers in the countries they reside in our efforts to reach a settlement on the Cyprus Question, together with solving long-awaited humanitarian issues which are still pending, such the heartbreaking and painful humanitarian tragedy of the Missing Persons. To this end, the role of the organized Diaspora, as a pressure group in major decision-making centers around the World, remains indispensible and of great importance.

For the dedication and commitment of our Diaspora around the world, we remain truly grateful.

Happy Independence Day for our Cyprus!

The United Kingdom and the Republic of Cyprus share a special and unique bond that stems from our shared history, close people-to-people links and common values, including as members of the Commonwealth. Today, on the occasion of the 60th Anniversary of Independence, I am proud to say that these bonds have never been stronger. Over the past year, we have seen even closer cooperation between our two countries, particularly in response to the on-going pandemic and with the arrangement on non-military development of the Sovereign Base Areas. Our ongoing bilateral co-operation in areas of education and tourism, trade and investment, and defence and security is of great benefit to our two countries and to the people of the United Kingdom and the Republic of Cyprus. We hope to deepen our bilateral relationship even further in the years to come.

It gives me great pleasure to send my congratulations on this day, together with my best wishes for the Government and people of the Republic of Cyprus.

Wendy Morton MP, Minister for European Neighbourhood and the Americas

On behalf of the Labour Party we would like to send our heartfelt wishes to the Republic of Cyprus, its people and its diaspora on the 60th anniversary of its Independence. As a longstanding friend and supporter of the Republic of Cyprus, the Labour party recognises and celebrates its achievements over the past 60 years, including the strong people-to-people, trading and security partnerships. Whilst the Republic of Cyprus has faced a number of challenges since independence, it is a stable and predictable ally of the UK, in an otherwise troubled part of the world.

We also fully respect the special historic and treaty obligations that the UK has towards the Republic of Cyprus and therefore, on this anniversary, we would like to reiterate our steadfast commitment to the reunification of the island as a bizonal, bicommunal federation. Whilst the current COVID pandemic prevents us celebrating in person, we are looking forward to doing so when circumstances permit.

On behalf of the Liberal Democrats I would like to wish the Republic of Cyprus and the Cypriot people a happy anniversary on their 60 years of independence. The people of our two countries have great links including the hundreds of thousands of Cypriots living in the UK as well as the thousands of British citizens living in Cyprus. It is great to see how over the past sixty years, our bilateral relations have grown from strength to strength, and I very much hope that they will continue to do so. The Liberal Democrats remain by the side of all Cypriot people, on their mission to secure a truly independent, free and united Cyprus, always in line with the United Nations resolutions and high-level agreements.

As the Chairman and Officers of the All-Party Parliamentary Group (APPG) for Cyprus, we join the Republic of Cyprus, its people and the UK Cypriot community in celebrating this historic 60th anniversary of independence. We also pay tribute to the strong and lasting relationships that have been built with successive Presidents, Governments and Parliamentarians over the last 60 years.

The United Kingdom and the Republic of Cyprus have always enjoyed a strong and close bond of friendship and collaboration, across a number of sectors, as well as between the people of the two countries. Indeed, over the last 60 years the Republic of Cyprus has also shown itself to be a pillar of stability and a critical part of the UK’s security infrastructure, in the Eastern Mediterranean.

On this anniversary, we are also reminded that the Republic of Cyprus has only been truly free and united for one-quarter of its existence. We therefore remain committed to supporting efforts to reunite Cyprus, in line with UN resolutions and High Level agreements, and we also strongly condemn any actions that seek to undermine the sovereignty of the Republic of Cyprus.

Wishing the Republic of Cyprus a very happy anniversary!

As Conservative Friends of Cyprus, we have all strongly supported the cause of a negotiated settlement that will see all Cypriots reunited in a free and democratic Cyprus.

We very much hope you will urge the two sides to make all the efforts they can to achieve a settlement. In the past, entrenched views in Ankara have proved a major stumbling block. We are deeply concerned about Turkish incursion in the Cyprus EEZ, and also by threats it has made to allow development in Famagusta on land owned by exiled Greek Cypriots, but to which they are unable to return.

We hope you will press the case with Ankara for the return of Famagusta and a just and fair outcome for all those who were forced to flee from their homes in villages like Larnakas Tis Lapithou and others which fell under Turkish control during the 1974 invasion.

Given the long history and close ties between Cyprus and the UK, we hope you will give a high priority to support Cypriots in their continuing efforts to reach agreement on a united future for their island.

The 60th anniversary of the Republic of Cyprus represents an opportunity to reflect and celebrate the achievements and progress made by the state and people of Cyprus since 1960. I would therefore like to pay tribute to all Presidents of the Republic of Cyprus for their immense contribution to Cyprus’ growing national story. The Republic of Cyprus has defied the odds and the gravest of challenges to be a democratic, modern and stable nation, in an otherwise troubled part of the world. It is a proud member of the European Union and the Commonwealth of Nations.

Christos Karaolis, President of the National Federation of Cypriots in the UK