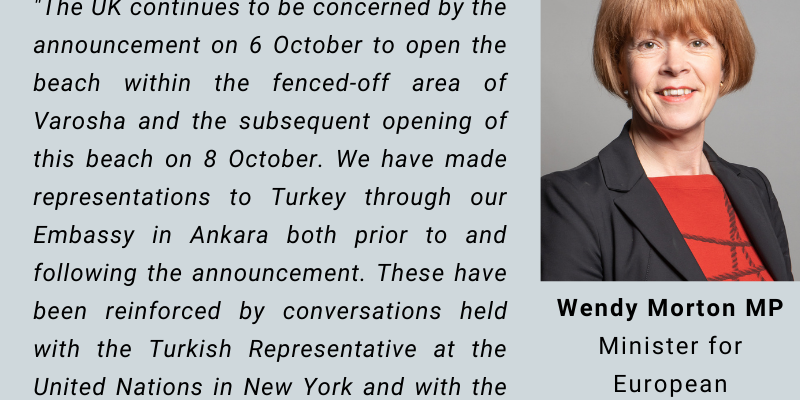 Theresa Villiers MP (Chipping Barnet) has asked the Foreign, Commonwealth & Development Office a question about Turkey’s illegal ‘opening’ of Varosi: “To ask the Secretary of State for Foreign, Commonwealth and Development Affairs, if he will make representations to his Turkish counterpart on the decision to re-open beachfront areas in Famagusta in violation of UN resolutions.”

In response, Wendy Morton MP (Minister for European Neighbourhood and Americas) said: “The UK continues to be concerned by the announcement on 6 October to open the beach within the fenced-off area of Varosha and the subsequent opening of this beach on 8 October. We have made representations to Turkey through our Embassy in Ankara both prior to and following the announcement. These have been reinforced by conversations held with the Turkish Representative at the United Nations in New York and with the Turkish Ambassador in London.

“In response to the announcement, the UK called for the UN Security Council to hold closed consultations on the matter on 9 October. The UK continues to strongly support the numerous Security Council Resolutions covering the issue of Varosha, notably 550 (1984) and 789 (1992). In this regard, we support the UN Presidential Statement reaffirming its support for the relevant Security Council Resolutions and expressing deep concern regarding the announcement. The issue of Varosha underlines the importance of reaching a comprehensive Cyprus Settlement as a matter of urgency. On 19 October the Foreign Secretary spoke to Turkish Foreign Minister Cavusolgu and stressed the importance of resuming the UN Cyprus Settlement process.”