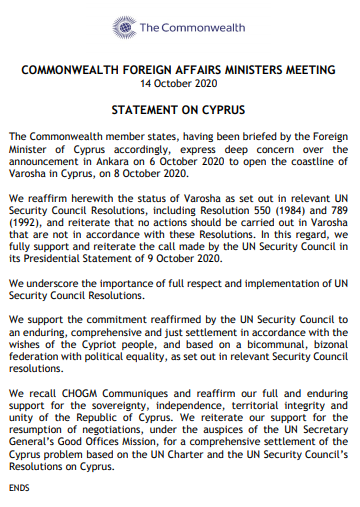 Following a briefing from Cypriot Foreign Minister Nicos Christodoulides on 14 October 2020, the Commonwealth expressed “deep concern” over Turkey’s decision to open part of the coastline of Varosi. The Commonwealth reaffirmed its support for the United Nations Security Council resolutions on Varosi and called for them to be fully respected and implemented.

The Commonwealth also expressed its support for an “enduring, comprehensive and just settlement” to the Cyprus issue that is “in accordance with the wishes of the Cypriot people and based on a bicommunal, bizonal federation with political equality, as set out in relevant Security Council resolutions.” They also reiterated their support for the resumption of negotiations under UN auspices and international law.