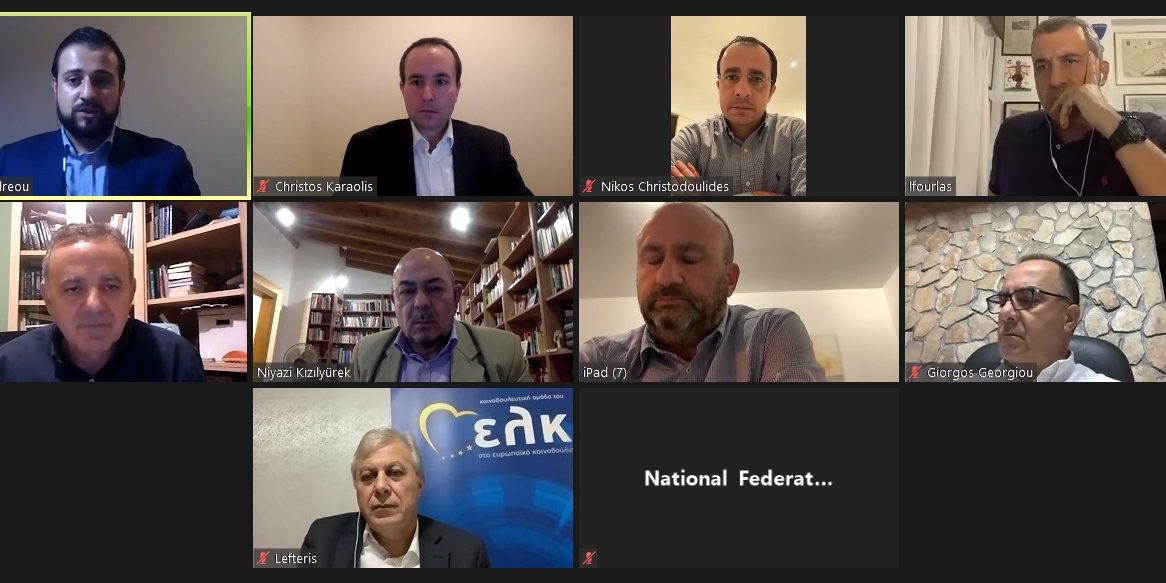 EFEK UK, under the auspices of the National Federation of Cypriots in the UK, marked 37 years since the illegal ‘Unilateral Declaration of Independence (UDI)’ by the secessionist regime in the occupied parts of Cyprus with a webinar discussion on the Cyprus issue. The webinar took place on 15 November 2020, the anniversary of the illegal ‘UDI’. H.E. the Minister of Foreign Affairs of the Republic of Cyprus, Nikos Christodoulides, was the guest speaker and he was joined by all 6 Cypriot Members of the European Parliament: Georgios Georgiou (AKEL, GUE/NGL); Demetris Papadakis (S&D); Costas Mavrides (DIKO, S&D); Loucas Fourlas (DISY, EPP); Lefteris Christoforou (DISY, EPP); and Niyazi Kızılyürek (AKEL, GUE/NGL).

The guests discussed recent developments on the Cyprus issue and unanimously condemned President Erdogan’s provocative visit and ‘picnic’ in Varosi, particularly on such a sensitive anniversary.

The 6 MEPs gave a loud and clear message for unity between Greek Cypriots and Turkish Cypriots, highlighting the importance of the European Union and the dignified status of the Republic of Cyprus, as anchors for the way forward. They then went on to present some of their actions (individual and collective) within the European Parliament, against the aggressive and continuous atrocities carried out by Turkey, focusing on the fact that when it comes to Cyprus-related issues, all 6 MEPs act as one unit, one team.

H.E. the Minister of Foreign Affairs, gave his verdict on the Cyprus Issue, explaining why the bi-zonal, bi-communal federation in the only way forward. He went on to explain what the agreed framework of EU sanctions currently includes and what Cyprus’ next moves will be before and during the European Council on the 10th & 11th of December. In response to a question by the coordinators of the meeting regarding what is expected from the UK Cypriot community on the Cyprus issue, the Minister highlighted the importance of pressing the UK government, in promoting the need of withdrawal of all military forces currently present in Cyprus and the anachronistic system of guarantees. He concluded by sending out a message of hope regarding the ‘next day’, whilst also highlighting the exemplary cooperation between the Ministry of Foreign Affairs of the Republic of Cyprus, the High Commission of Cyprus in the UK, the National Federation of Cypriots in the UK and EFEK UK during the first wave of the COVID-19 pandemic.

Sir Roger Gale MP (Con, Chair of the All-Party Parliamentary Group for Cyprus) and Fabian Hamilton MP (Lab, Shadow Minister for Peace and Disarmament) had recorded messages to condemn the illegal ‘UDI’ and these were played at the event. Both MPs criticised Turkey’s recent provocations and aggressive rhetoric and called for a resumption of talks to reunify the island based on the agreed parameters of a bi-zonal, bi-communal federation and the relevant UN Security Council resolutions.

The meeting was chaired by George Andreou (President of EFEK UK) and Christos Karaolis (President of the National Federation of Cypriots in the UK).