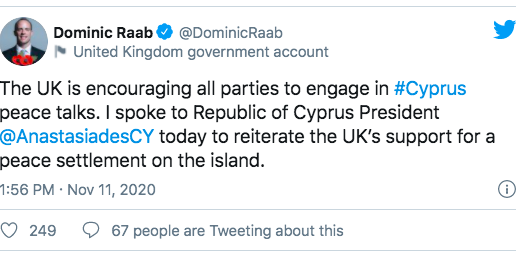 President Anastasiades spoke to UK Foreign Secretary Dominic Raab earlier today about the Cyprus issue. The UK reaffirmed its strong support for the resumption of negotiations towards a solution. The President of Cyprus also raised his deep concerns with Turkey’s recent illegal actions in the Exclusive Economic Zone of the Republic of Cyprus, as well as Turkey’s illegal ‘opening’ of part of Varosi beachfront. Read the statement from Cypriot Government Spokesperson Kyriacos Koushos here

The UK is encouraging all parties to engage in #Cyprus peace talks. I spoke to Republic of Cyprus President @AnastasiadesCY today to reiterate the UK’s support for a peace settlement on the island.