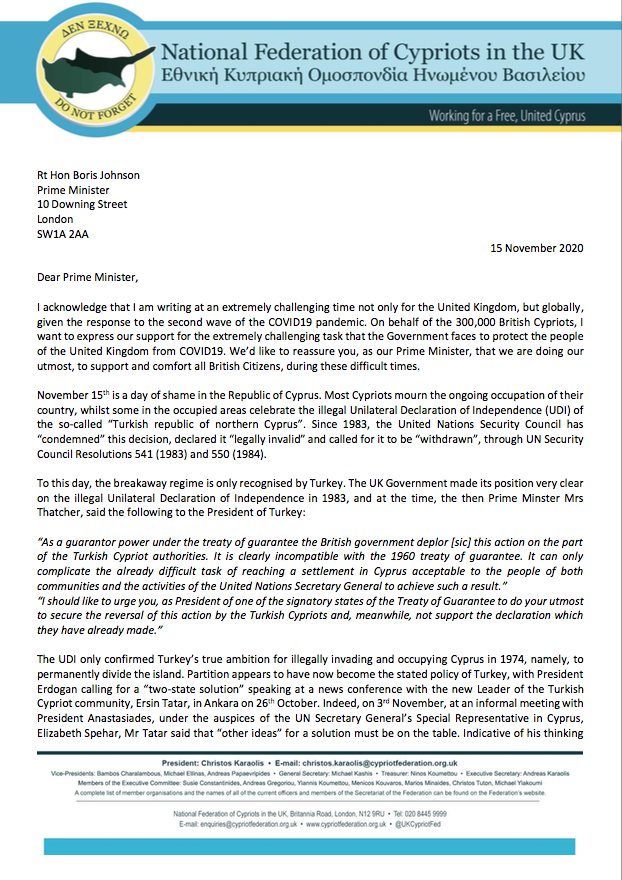 UK Cypriot Federation condemns UDI in letters to PM Johnson and Turkish Ambassador
The President of the National Federation of Cypriots in the UK Christos Karaolis has described the 15th of November as “a day of shame” in a letter to Prime Minister Boris Johnson to mark the upcoming 37th anniversary of the illegal Unilateral Declaration of Independence (UDI) of the so-called ‘Turkish Republic of Northern Cyprus’.
He summarises the UN Security Council resolutions condemning the UDI, he underlines the rejection of the move by the then UK Prime Minister Margaret Thatcher and notes that “the UDI only confirmed Turkey’s true ambition for illegally invading and occupying Cyprus in 1974, namely, to permanently divide the island.”
Read our letter to the Prime Minister here
He points to recent references to a “two-state solution” by President Erdogan and the new Turkish Cypriot leader Ersin Tatar and then stresses that this “would not only violate the 1960 Treaties of Establishment and Guarantee, of which the United Kingdom is a co-signatory and Guarantor Power, but also disregard the agreed basis for negotiations, namely a bizonal, bicommunal federation, and the significant convergences reached to date.”
The Federation letter to PM Johnson also recounts Turkey’s recent provocations in the Cypriot Exclusive Economic Zone and in Varosha. It comments that President Erdogan’s announced intention to visit the area and have a picnic on the beach on the tragic anniversary of the illegal UDI “signals to the international community [his] total disregard for international law and UN Security Resolutions, as well as his intentions for Cyprus.”
It contrasts President Anastasiades’s positions of principle and willingness to return to the negotiating table and commence negotiations from where they left off in Crans Montana.
Mr Karaolis also notes the UN Secretary General’s clear position that the current system of Guarantees, with intervention rights, is not sustainable and notes that Turkey’s plan for a post-solution Cyprus is one of control and illegal interference which is not in the best interests of the Cypriot people, nor the United Kingdom, given the presence of UK military bases on the island.
“Therefore, at this time the UK Government must be clear in its public messaging on Cyprus, and its representations to Turkey, to reaffirm unequivocally a commitment to a bizonal, bicommunal federation as the only framework for a solution, and to call for the abolition of this anachronistic system of security and guarantees,” writes the Federation President.
“Only a reunited and truly independent Cyprus will deliver freedom, peace and security to all of the island’s people and ensure that the Republic of Cyprus – a member of the Commonwealth, UN and EU – will remain a reliable, predictable and stable partner for the UK.
“You have the power to make a lasting difference in relation to Cyprus and, on this tragic anniversary, I urge you to exercise this proactively and constructively,” concludes the Federation letter to the UK Prime Minister.
A similar letter has been addressed to the leader of the major opposition Labour Party Sir Keir Starmer.
Mr Karaolis has also marked Sunday’s grim anniversary with a letter to Turkey’s ambassador to London, in which he says that Ankara’s failure to adhere to international law is “ a shameful legacy”.
He urges Turkey to wholeheartedly and constructively embrace the opportunity offered by the UNSG for a resumption of settlement talks and to increase all efforts towards delivering a reunified Cyprus as a bi-zonal, bi-communal Federation, where the human rights of all Cypriots will be safeguarded and that is based on the relevant United Nations Security Council Resolutions and High Level Agreements.
Thanasis Gavos (Cyprus News Agency)
Recent Posts
Upcoming Events