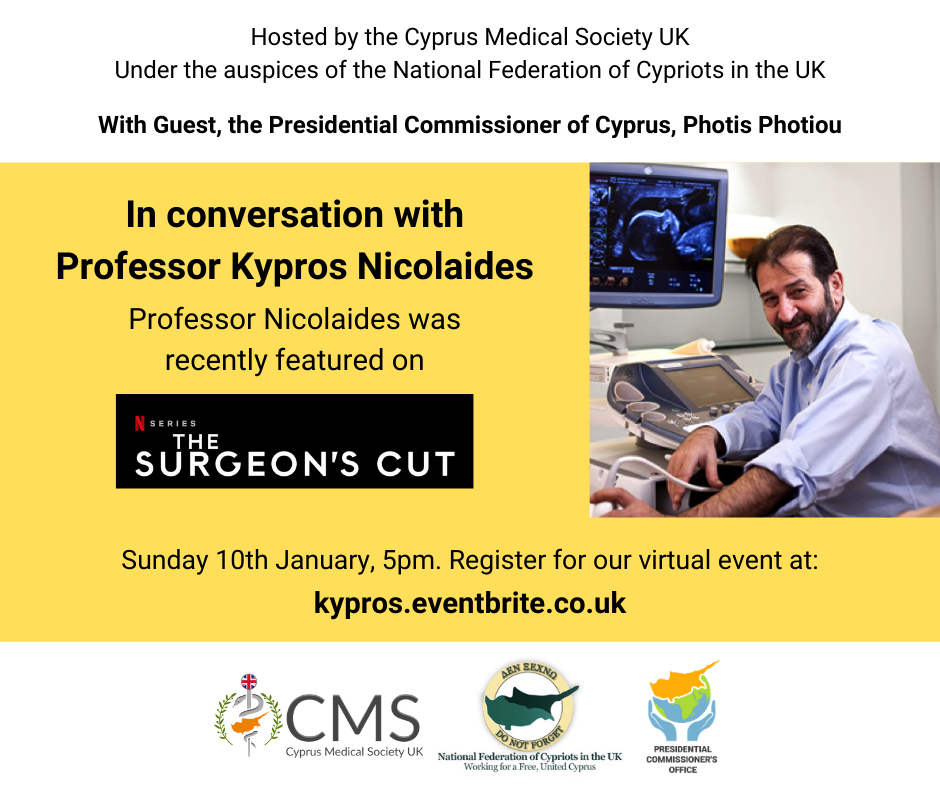 On Sunday 10th January, the Cyprus Medical Society in UK, under the auspices of the National Federation of Cypriots in the UK, is proud to be hosting a live online interview with Professor Kypros Nicolaides. The event will start at 5pm. Professor Nicolaides is a world-renowned fetal medicine pioneer who was recently featured on the Netflix series, ‘The Surgeon’s Cut’. Presidential Commissioner of Cyprus Photis Photiou and High Commissioner of Cyprus to the UK Andreas Kakouris, will be guests.

To watch, register at kypros.eventbrite.co.uk

This interview will be a fascinating insight into the life and mind of one of the world’s leading scientists. In 2020, Professor Nicolaides was elected to the US National Academy of Medicine, considered to be one of the highest honours in the fields of health and medicine, for “improving the care of pregnant women worldwide with pioneering, rigorous and creative approaches, and making seminal contributions to prenatal diagnosis and every major obstetrical disorder”. Professor Nicolaides has been Professor of Fetal Medicine at King’s College London since 1992 and is Founder of the Fetal Medicine Foundation, a UK charity that he set up in 1995.

Alongside his work in the field of medicine, Professor Nicolaides has been an active member of the UK Cypriot community. He has spoken out against Turkey’s ongoing occupation of Cyprus and has been a regular at community events, parliamentary meetings on Cyprus, seminars and protests. In 2018, he was awarded the highest civilian honour by President Anastasiades, the Medal of Outstanding Service to the Republic of Cyprus.

During the interview, Professor Nicolaides will be speaking about his life, medical career, influences, and passion for Cyprus. There will also be remarks and reflections from the Presidential Commissioner and High Commissioner.