Federal solution is the only way for peace in Cyprus 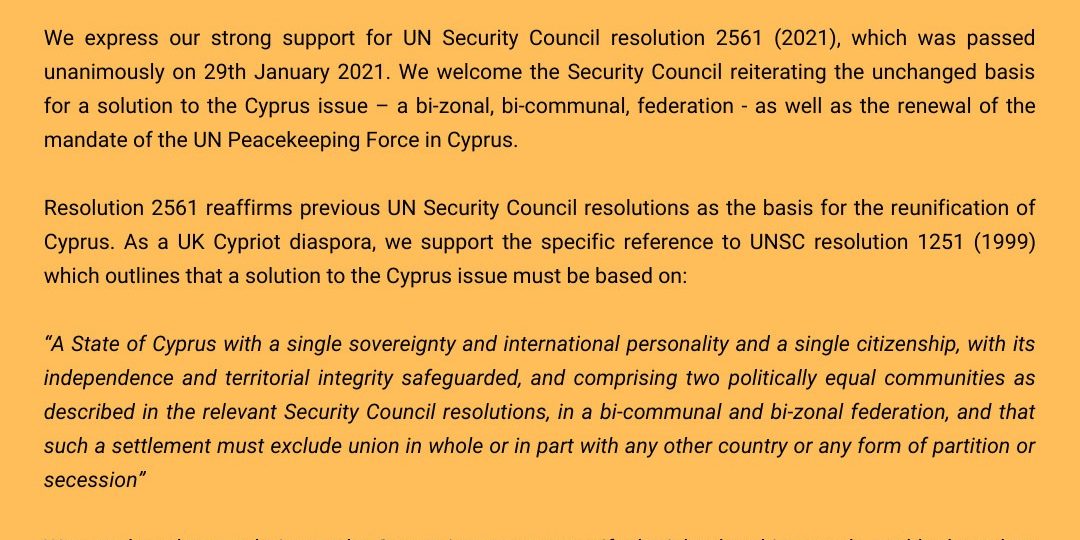 The UK Cypriot diaspora is clear that only a federal solution, in line with UNSC resolutions & international law will bring lasting peace to Cyprus.

FEDERAL SOLUTION IS THE ONLY WAY FOR PEACE IN CYPRUS

We express our strong support for UN Security Council resolution 2561 (2021), which was passed unanimously on 29th January 2021. We welcome the Security Council reiterating the unchanged basis for a solution to the Cyprus issue – a bi-zonal, bi-communal, federation – as well as the renewal of the mandate of the UN Peacekeeping Force in Cyprus.

Resolution 2561 reaffirms previous UN Security Council resolutions as the basis for the reunification of Cyprus. As a UK Cypriot diaspora, we support the specific reference to UNSC resolution 1251 (1999) which outlines that a solution to the Cyprus issue must be based on:

“A State of Cyprus with a single sovereignty and international personality and a single citizenship, with its independence and territorial integrity safeguarded, and comprising two politically equal communities as described in the relevant Security Council resolutions, in a bi-communal and bi-zonal federation, and that such a settlement must exclude union in whole or in part with any other country or any form of partition or secession”

We are clear that a solution to the Cyprus issue must reunify the island and its people, and be based on United Nations Security Council resolutions, as well as principles of International Law and Human Rights.

National Federation of Cypriots in the UK

The Platform for Peace and Federal Cyprus – UK