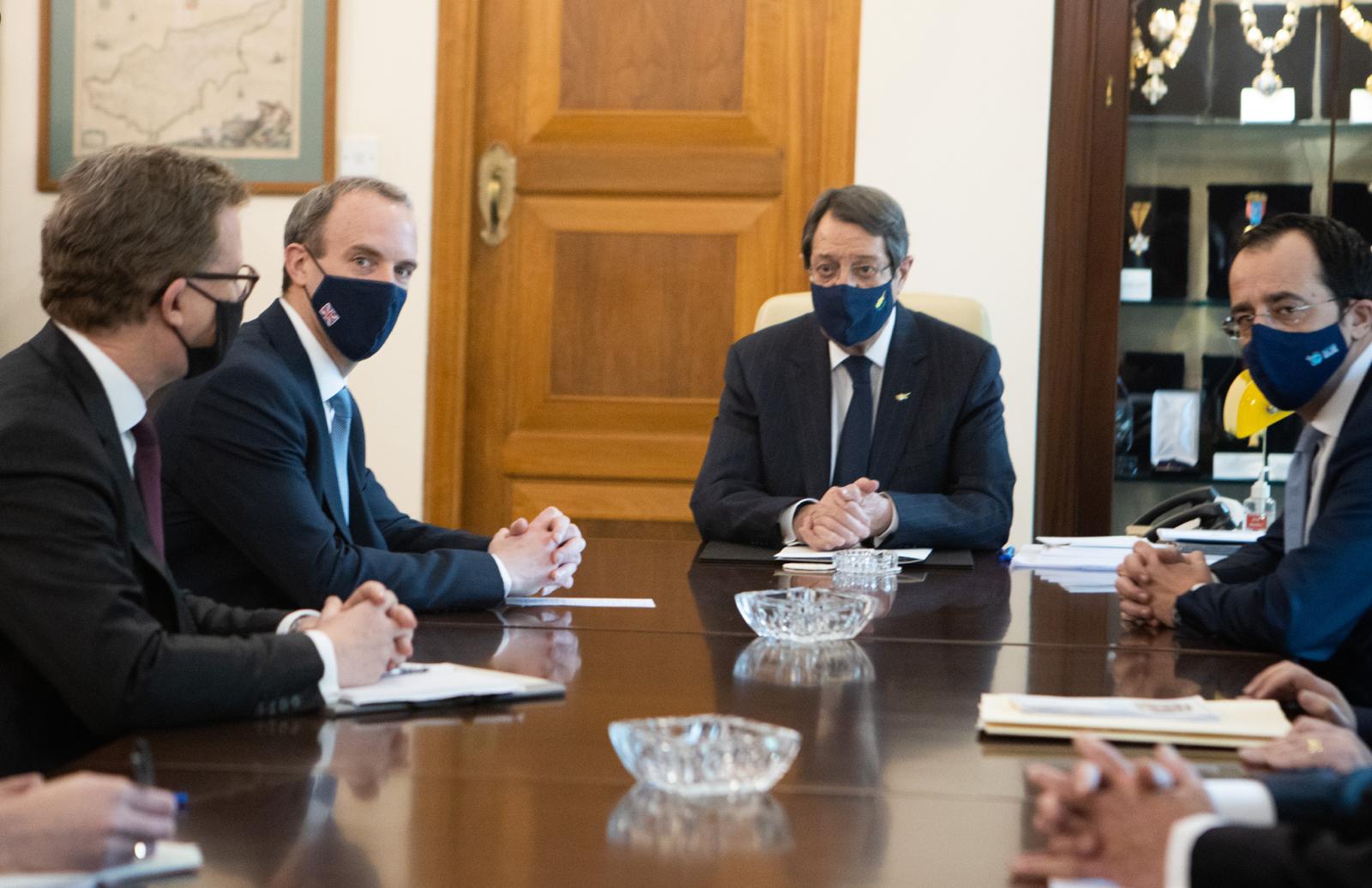 Foreign Secretary Dominic Raab visited Cyprus today (4th Feb) for a series of meetings ahead of an informal 5+UN Conference on Cyprus in early March.

Ahead of his meeting, the National Federation of Cypriots in the UK urged him to seize this opportunity and specifically asked him to:

Foreign Secretary @DominicRaab is in #Cyprus today for a series of meetings ahead of an informal 5+UN conference on Cyprus in March. We urge him to seize this opportunity and these are our #UKCypriot diaspora's asks ? pic.twitter.com/sH3CPWYFVU

— National Federation of Cypriots in the UK (@UKCypriotFed) February 4, 2021

Prior to the meetings, Fabian Hamilton MP, Shadow Minister for Peace and Disarmament, urged the Foreign Secretary to use his visit to “make a firm, renewed commitment to a bi-zonal bi-communal federal political settlement, in the interests of all the people of Cyprus.”

Foreign Secretary Raab met with President Anastasiades on Thursday morning and they held a detailed discussion on the latest developments on the Cyprus issue. During the meeting, Mr Raab said the UK is “committed to supporting a just and lasting solution to the division of Cyprus” and urged “an open and flexible approach to Cyprus Settlement talks.”

The UK is committed to supporting a just and lasting solution to the division of Cyprus. I met the Republic of Cyprus President @AnastasiadesCY today to reiterate UK support and urge an open and flexible approach to #Cyprus Settlement talks. pic.twitter.com/tnQMpn3QSt

Later in the day, the Foreign Secretary met with Nikos Christodoulides, Minister of Foreign Affairs of the Republic of Cyprus, to discuss the Cyprus issue further as well as bilateral relations between the UK and Cyprus. As reported by the Cyprus News Agency:

British Foreign Secretary Dominic Raab urged all sides to approach the informal 5+UN meeting with a willingness to demonstrate flexibility and compromise. Mr Raab said, “I think it’s an opportunity to push for a settlement which will benefit both sides but also have a premium dividend, if you like, for regional stability, security and prosperity. I think a failure to reach a settlement after so many efforts will benefit no-one,”

Mr Raab urged all sides “to come to the talks with a willingness to demonstrate flexibility and compromise, noting that he was very heartened by his conversations at the scope for that.” He added, “we will work with the Cypriot people and the UN of course, to finally resolve the Cyprus problem and achieve a just and lasting settlement. So that, again, the young people, the next generation of Cypriots, can fulfil their aspirations, their dreams and evade their fears and anxieties that appear in both communities.”

He noted that “we also want to play a supporting role in helping the people of Cyprus, both sides of this dispute, to move things forward, to break the deadlock, to find a settlement that works in everyone’s interest. We are a problem-solving nation by instinct, we are a Guarantor Power, we are a permanent member of the UN Security Council.”

He stressed that the UK is “a long-standing friend of the Cypriot people across the island. So, we want to see a permanent, enduring and lasting end to the dispute,” and added that, “a reunited, Cyprus can achieve its full potential as a beacon of democracy, stability, prosperity and, frankly, the underlying values” that Brits and Cypriots share.

During his own press statement, Mr Christodoulides said that Raab’s visit was important and timely “given that it also coincides with efforts by the UN Secretary General to resume negotiations for a comprehensive settlement of the Cyprus Problem for a bi-zonal bi-communal federation.”

Mr Christodoulides also told his British counterpart that they expected negotiations to resume soon “from the point where they were suspended at Crans-Montana… I specifically expressed our declared readiness to continue negotiations on the basis of the framework of the UN Secretary General, the existing convergences and the joint declaration of February 2014, while expressing the hope that the same level of commitment will be displayed by all involved.”

Furthermore, he said that, “a comprehensive settlement must be in line with UN Security Council Resolutions, the UN Charter, EU law values and principles and that a reunited Cyprus must be a functional state, a viable member state of the EU, a stable, reliable actor in its region. A modern European state not tied back by anachronistic systems and structures that have no place in the 21st century.”

Christodoulides highlighted that the UK has a critical role to play as a party to the Treaty of Establishment and the Treaty of Guarantee, as well as in its capacity as a Permanent Member of the UN Security Council.

Moreover, he said that, “as we strive for a meaningful process, it is important to impress upon everyone involved the need to refrain from provocations that pose the risk of derailing the effort.” He added, “Dominic is a scholar of international law, and very much understands the importance of upholding international law, including the 1982 UN Convention on the Law of the Sea.”

With regards to Varosi in particular, Christodoulides said that he noted the UK’s constructive stance on agreeing on a strong Presidential Statement by the Security Council last October and that he repeated how regretful it is that despite international condemnation Turkey was not deterred from proceeding with the implementation of its violations within the fenced area, contrary to UNSCRs.

Speaking about the UK and Cyprus’ bilateral relations, Raab noted the “shared values, shared legal systems, joint membership of the Commonwealth, and a very big web of people-to-people relations, including students”. He also noted the reliable friendship between the two countries and their partnerships in education, science, research, and security, as well as prospects for widening cooperation.

On his part, Christodoulides said that Raab`s visit heralds the opening of a new, very promising chapter in the long history book of the special relationship Cyprus and the United Kingdom share. Our countries have been close partners within the EU, and I assure you that our effective rapport will continue, and will be strengthened.

Furthermore he said that “the potential for advancing our relations is immense and the goal is common – to build a strategic partnership with the UK. An array of fields is open for enhanced cooperation, ranging from education, technology and business to security and defence”.

Mr Christodoulides also briefed Raab on “the active engagement of Cyprus, in the Eastern Mediterranean and the Gulf together with a good number of likeminded states, within the expanding framework of our trilateral cooperation platforms, aiming to foster synergies through a positive agenda.” He said that the aim is “to strengthen the prospects of peace, stability and prosperity in the region.”

“I emphasised that this positive agenda network is diversifying to include partners with a common geopolitical vision with the aim of preparing the ground for more extended and institutionalised regional partnerships. The UK knows the region well, and we certainly see prospects for enhanced cooperation on this front as well,” he concluded.

In the afternoon, Raab visited the top UN official in Cyprus, Elizabeth Spehar for a briefing on the UN’s efforts to promote peace on the island. Raab also visited the UN buffer zone and members of UNFICYP.

Today, top @UN official in #Cyprus, Elizabeth Spehar, met with #UK Foreign Secretary, @DominicRaab, for a briefing on UN efforts to promote peace on the island. Mr. Raab also visited the #bufferzone and peacekeepers in sector two. The @UN is grateful 4 the ?? support to #UNFICYP. pic.twitter.com/Oad5h6GHfI

Raab’s final meeting of the day was with Turkish Cypriot leader Ersin Tatar, during which he urged “flexibility ahead of the talks for the benefit of both Cypriot communities”. Mr Tatar said that he repeated his desire for the formal partition of the island.