In conversation with Dame Janet Paraskeva 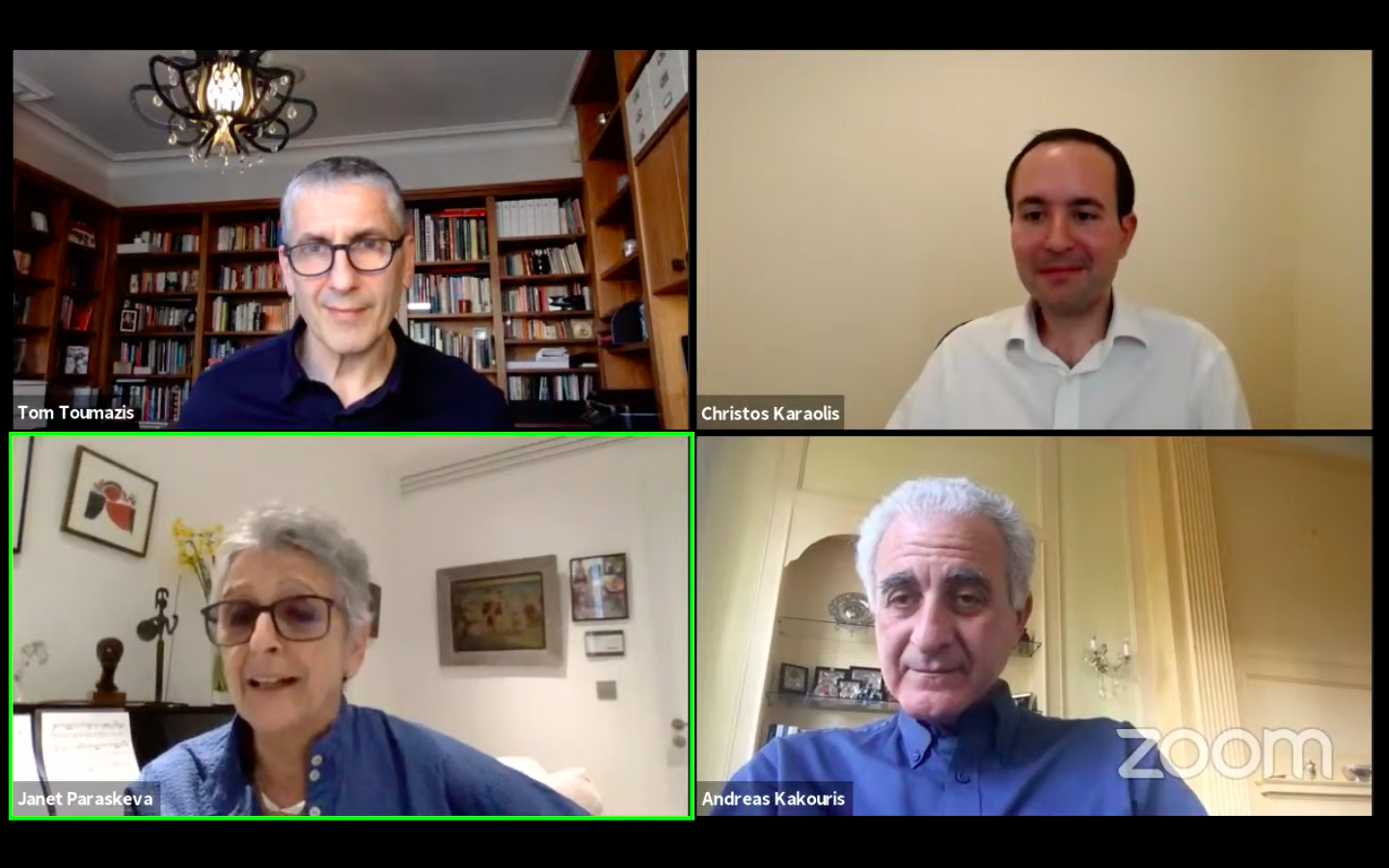 On Sunday 18th April, Dame Janet Paraskeva joined Tom Toumazis MBE for an in-depth interview covering her life story, her distinguished and long career in public service, and the challenges she has faced as a gay woman. The event was held virtually and took place under the auspices of the National Federation of Cypriots in the UK.

Christos Karaolis, President of the National Federation, began the event by introducing both Dame Janet Paraskeva and interviewer Tom Toumazis.

Dame Janet Paraskeva was born in Newport, Wales in 1946 and began her career as a science and maths teacher. Her career changed course after she graduated from the Open University in 1983 and she then went on to serve in numerous public service leadership roles. Dame Janet was First Civil Service Commissioner in 2006, with the responsibility of developing an effective and impartial Civil Service. She was appointed by the Prime Minister as one of three members of an inquiry to determine whether British intelligence officers were complicit in torture. Dame Janet has also served as Chief Executive of the Law Society, Chair of the Olympic Lottery Distributor, and non-executive director of the Serious Organised Crime Agency.

Interviewer, Tom Toumazis MBE, has a 35-year career in the entertainment, media and the technology industry working at companies such as ITV, Disney and Yahoo. More recently Tom Toumazis has moved to investing in start-ups and has a portfolio focused in technology, media, and the arts. He is also a Trustee of the NSPCC.

“University isn’t for you, my dear, your father doesn’t speak English”

In the first section of the interview, Tom Toumazis asked Dame Janet about her upbringing and the influence of her family. Antonis, her father, moved to London in the 1930s from a tiny village on Karpasia Peninsula called Neta. In London, he met his future wife, Doris, and then moved with her to her hometown of Newport, Wales.

In her early teenage years, Dame Janet moved to Hastings, which she found to be far less multi-cultural and diverse than Newport. Whilst a teenager in Hastings, she experienced racism from her classmates and her father’s Cypriot accent was often mocked. Despite being strong academically, the head teacher of her school in Hastings told her, “university isn’t for you, my dear, your father doesn’t speak English”. Due to this negative experience, she decided to go to teacher training college instead of university and pursued a career in education.

“Why did you decide to take the worst job in the country?”

After working as a teacher for a few years and enjoying the job, Dame Janet decided to take up a voluntary opportunity running a youth club in the evenings after work. Although she didn’t intend to leave teaching, this experience quickly led to a full-time job in youth work where she helped young people deal with social issues and get a boost in life.

After working in a variety of youth organisations, Dame Janet decided to go back to school and took a part-time course at the Open University. Tom Toumazis asked Dame Janet why she made that decision she said she was motivated to learn more about the issues that she was working on and had a desire to prove wrong the people that frowned upon the fact that she didn’t have a degree.

Following a successful stint running youth organisations, Dame Janet was appointed Director of the National Lottery Charities Board in 1995. She oversaw the introduction of the first National Lottery grant system, starting the entire programme from the beginning. She introduced a regional system of grants to ensure that small, local organisations and charities didn’t get lost in the system and had access to the money that they needed. During her tenure, £1.5bn was awarded to voluntary organisations.

Dame Janet was then appointed Chief Executive of the Law Society of England and Wales, which was a struggling organisation at the time and had been referred to in the press as the “the worst job in the country”. Tom Toumazis asked her why she chose to take this job and Dame Janet remarked, “Why not? Nobody else had managed to fix it, if I didn’t succeed I would just be someone else who had tried and failed, or, I might succeed.”

After an impressive stint transforming and modernising the Law Society, Prime Minister Tony Blair appointed Dame Janet as First Civil Service Commissioner. In this role, she was responsible for ensuring impartiality in the civil service and she oversaw senior appointments to the Permanent Secretary roles in each government department. During her time as First Civil Service Commissioner she helped introduce a more robust and fair recruitment process. She noted that this reduced the influence of the ‘old boys’ network and the number of female permanent secretaries increased from one to nine whilst she was in the post.

Since leaving the civil service, Dame Janet has held a wide variety of public service leadership roles and, notably, was part of a three-person inquiry to determine whether British intelligence officers were complicit in the torture of detainees, including those from the Guantanamo Bay detention camp.

Tom Toumazis asked what piece of advice she’d give to younger people for their own careers. Dame Janet responded by quoting a piece of advice that the first head teacher she worked under gave her, “aim for the sky, you might fall into the trees. If you only aim for the trees, you’ll fall on the floor.”

My father asked, “how many beds?”. I responded, “just one”

Throughout her career, Dame Janet faced discrimination over her sexuality. Whilst Director of the National Lottery Charities Board, tabloid newspapers ran a front-page story criticising the number of grants that had been given to programmes working with young, gay man. Dame Janet also revealed that journalists had contacted her friends and family in an unsuccessful attempt to get exclusive stories about her personal life.

Tom Toumazis asked whether she found it difficult ‘coming out’ to her Cypriot father. Dame Janet said that she went to stay with him with her partner and her father asked, “how many beds?”, to which Dame Janet responded, “one”. She said that her father didn’t say another word about it.

Dame Janet noted that she had often found it strange that so much emphasis had been placed on her sexuality during her career, but that she had a realisation when she saw the positive impact it could have on others. She recalled a newspaper article about her work that also featured an unrelated reference to her being on the ‘Pink List’. Dame Janet explained that a couple of weeks later she received a letter from a senior civil servant saying it gave him courage to come out. Dame Janet noted, “there is a point in being clear [about your sexuality] and it’s something to be proud of and celebrate”.

“The older I get, the more Cypriot I feel”

Tom Toumazis asked whether Dame Janet’s Cypriot heritage and identity was important to her and noted that her parents would be incredible proud of her achievements. She said, “the older I get, the more Cypriot I feel, and some of that has to do with now being in touch with the National Federation. I wish that I had been in touch with the National Federation earlier in my career”. She also spoke of how special it was to her to have a picture of herself, her father, her daughter and her grandson and think of them all as Cypriots across four different generations.

The High Commissioner of the Republic of Cyprus, Mr Andreas Kakouris, closed the event with some remarks and reflections on Dame Janet’s contribution to Britain and praised her as an inspiration to all UK Cypriots.