Federation and APPG for Cyprus write to Foreign Secretary 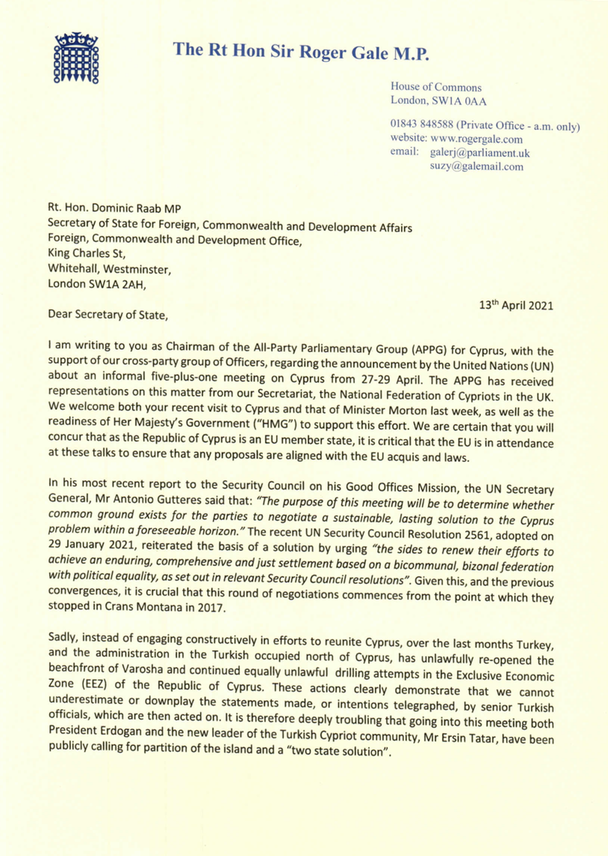 The National Federation of Cypriots in the UK and the All-Party Parliamentary Group (APPG) for Cyprus have both written to Foreign Secretary Dominic Raab ahead of next week’s informal five-plus-one meeting on the Cyprus issue in Geneva, Swizterland. The meeting will take place between 27-29 April and the participants will be President Anastasiades, Turkish Cypriot leader Ersin Tatar, the United Kingdom, Greece and Turkey. The UN has convened the meeting and stated that it’s purpose is “to determine whether common ground exists for the parties to negotiate a lasting solution to the Cyprus problem within a foreseeable horizon.”

In our letter, the Federation made its message clear, ahead of the Geneva summit, by expressing our hope that the talks will lead towards progress towards a free and reunified Cyprus. Specifically, we call on the UK Government to advocate 5 policy positions based on respect for human rights and international law:

“Our interests in the region are best served by having a reunified, stable and truly independent Cyprus” – APPG for Cyprus to Foreign Secretary Raab

In their letter, the APPG for Cyprus write that Cyprus should be reunified in accordance with “the internationally accepted model of a bi-zonal, bi-communal federation with political equality, as defined by the relevant UN Security Council resolutions”. The letter also makes clear that “British interests in the region are best served by having a reunified, stable and truly independent Cyprus. It is therefore essential that the system of guarantees that has failed Cyprus so badly in the past is abolished.”

The letter highlights Turkey’s negative approach towards reunification efforts, pointing out recent actions on Varosha and “unlawful drilling attempts in the Exclusive Economic Zone (EEZ) of the Republic of Cyprus.” The APPG also write that “these actions clearly demonstrate that we cannot underestimate or downplay the statements made, or intentions telegraphed, by senior Turkish officials.” Specifically, they note that in the months leading up to the five-plus-one meeting in Geneva, President Erdogan of Turkey and Turkish Cypriot leader Ersin Tatar have both publicly called for the permanent partition of the island.

The letter concludes by calling on the British Government to play a constructive role in the upcoming meeting and “stand firmly on the side of international law and UN resolutions.” The APPG for Cyprus also highlights that the UK has a duty to uphold the relevant UN Security Council resolutions as a Permanent Member of the UN Security Council.

READ: APPG for Cyprus letter to the Foreign Secretary