In conversation with John Christodoulou 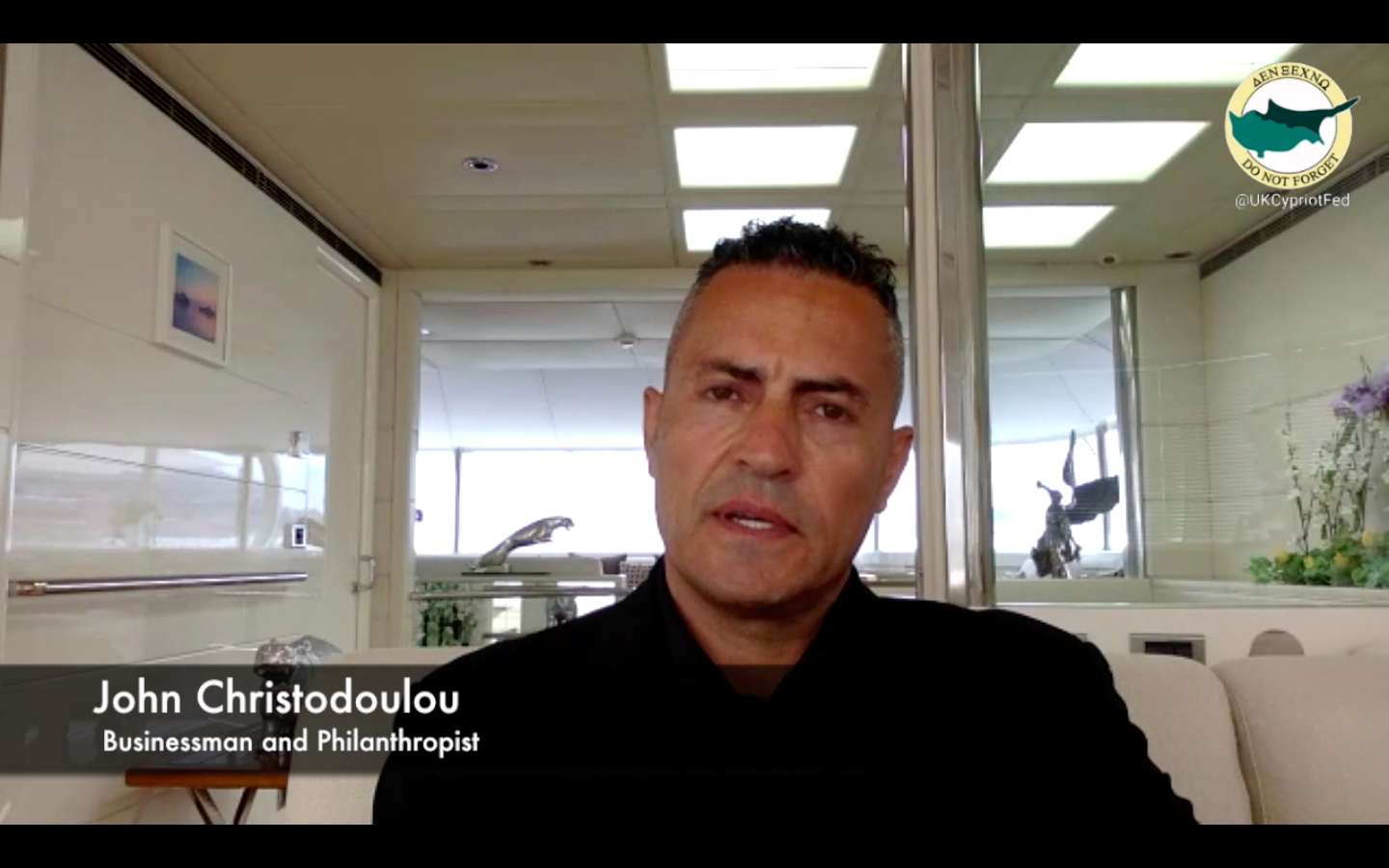 On Sunday 13th June, the National Federation of Cypriots published an interview they held with UK Cypriot property developer and philanthropist, John Christodoulou. The interview was held virtually and was hosted by Christos Karaolis, President of the National Federation of Cypriots in the UK. The discussion covered topics including John Christodoulou’s real estate career, his philanthropic work and his painful childhood memories of Turkey’s invasion of Cyprus in 1974.

John Christodoulou fled Cyprus as a child after Turkey’s invasion of the island in 1974. He built a remarkably successful career in real estate and founded the property development and investment company, Yianis Group. He has also started his own charity, the Yianis Christodoulou Foundation, through which he supports children’s education and tackles child poverty – two issues that are very close to his heart.

Watch the interview with John Christodoulou

The event was opened by the Presidential Commissioner of the Republic of Cyprus, Photis Photiou, who paid tribute to John’s passion for Cyprus and active interest in the Cyprus issue. He also credited John for his charitable work during the COVID-19 pandemic, both in the UK and in Cyprus and said he was “among the best ambassadors of Cyprus abroad”.

Fleeing Cyprus as a refugee in 1974

John was born in 1965 in Kaimakli, Cyprus but was tragically forced to flee Cyprus as a refugee during Turkey’s illegal military invasion of Cyprus in 1974. He painfully recalled that on the day of Turkey’s invasion, he was walking with his mother and sister when they suddenly realised the invasion was happening after hearing explosion. John explained that his family quickly took shelter in his uncle’s basement alongside more than 30 other frightened people. He explained that he has never forgotten the “vulnerability and helplessness” that he felt that day, and he still worries about the psychological impact of the invasion on the adults that went through it.

Following the invasion, John’s family home was now under occupation so his family fled to the UK to start a new life. He noted that, “the UK had its hands wide open for refugees at that time.” John has credited the strength and bravery of his father, who worked hard to support the entire family after they fled to the UK, despite losing everything he had during the invasion. He said that his father has inspired him more than anyone else and “has given me the strength I have today”.

John spoke candidly about his fears for Cyprus in the face of President Erdogan’s increasing authoritarianism and threatening rhetoric. He said that the current situation “frightens” him that he “worries about his family in Cyprus”.

To confront these challenges, John spoke passionately about his desire for Cypriots across the world to come together and unify their efforts towards the reunification of the island and towards the end of Turkey’s occupation. He said that Cypriots in the diaspora and on the island, should all do more to raise awareness of the Cyprus issue and the injustice that Cypriots face – “talk is cheap… action is louder than words… so let’s make our voices louder.”

Click here to email your MP about the situation in Cyprus

After leaving school at 16, John worked as a diamond mounter for several years. He worked hard and became a successful diamond mounter, making enough money to invest in his first property and enter the world of real estate. His first purchase was a studio flat in Finchley, which he developed and then sold for a healthy profit.

John said that perhaps the most important lesson he learned early in his real estate career was the importance of having positive relationships with banks and being “a calculated borrower”. He said that he quickly understood that he had to show the banks that he knew what he was doing, and he built a reputation of being sensible and credible. John said that this made him realise the importance of having a clear formula and plan for his investments, rather than simply using borrowed money to buy anything that he considered to be a good deal.

Christos Karaolis asked John about how he manages his Yianis Group, given how large and geographically diverse it is. In response, John joked, “it often feels like pushing an elephant”. He said that it’s vital to stay focussed on the details and gave examples such as listening carefully to the experiences of both the person serving at a hotel bar, as well as the team involved in making large financial deals. He says this hands-on approach is time-consuming but critical to the strength of the business. He warned, “if you take your eye off the ball, a lot can go wrong”.

Asked about the impact of the ongoing COVID-19 pandemic, John said it has been incredibly tough as 30% of the Yianis Group business is hotels. However, John confirmed that he has not borrowed any money from the Government and hasn’t let go of any staff. He said the most important thing for him during this time was to “stay faithful to the people that are faithful to you.”

John worked closely with the National Federation during the COVID-19 pandemic to support vulnerable and disadvantaged UK Cypriots by sponsoring food packages to ensure that people had a supply of food, and felt cared for during a difficult time. Christos Karaolis thanked John for his incredible efforts to support the UK Cypriot community during the pandemic.

As John’s real estate successes grew, he felt compelled to give something back to those who are less fortunate than himself. He therefore established the Yianis Christodoulou Foundation and said that it brings him far more happiness than his business career. The charity focusses on tackling child poverty and supporting children’s education. John said that he decided to focus his charity efforts on children because he wants to give children inspiration, a fair chance at life and to help them see that “their future is bright”.

John said that one of the initiatives that he is proudest of is a children’s home that he helped refurbish in Kaimakli, Cyprus for disadvantaged children whose parents are unable to look after them. The refurbishment has given the children somewhere comfortable and safe to be, as well as books to read, and better resources. He also said that he has sponsored initiatives in Cyprus such as anti-drug awareness campaigns, refurbishing basketball courts to ensure they are safer to play on and donations to help the school in the enclaved town of Rizokarpasso.

The High Commissioner of the Republic of Cyprus in the UK, Mr Andreas Kakouris, closed the event with some comments of his own on the interview. Mr Kakouris said that he found John Christodoulou’s story “inspiring” and thanked him for his “under the radar” charity work for disadvantaged children in Cyprus and for Rizokarpasso.

Watch the interview with John Christodoulou