Church memorial service to remember those who fell defending Cyprus 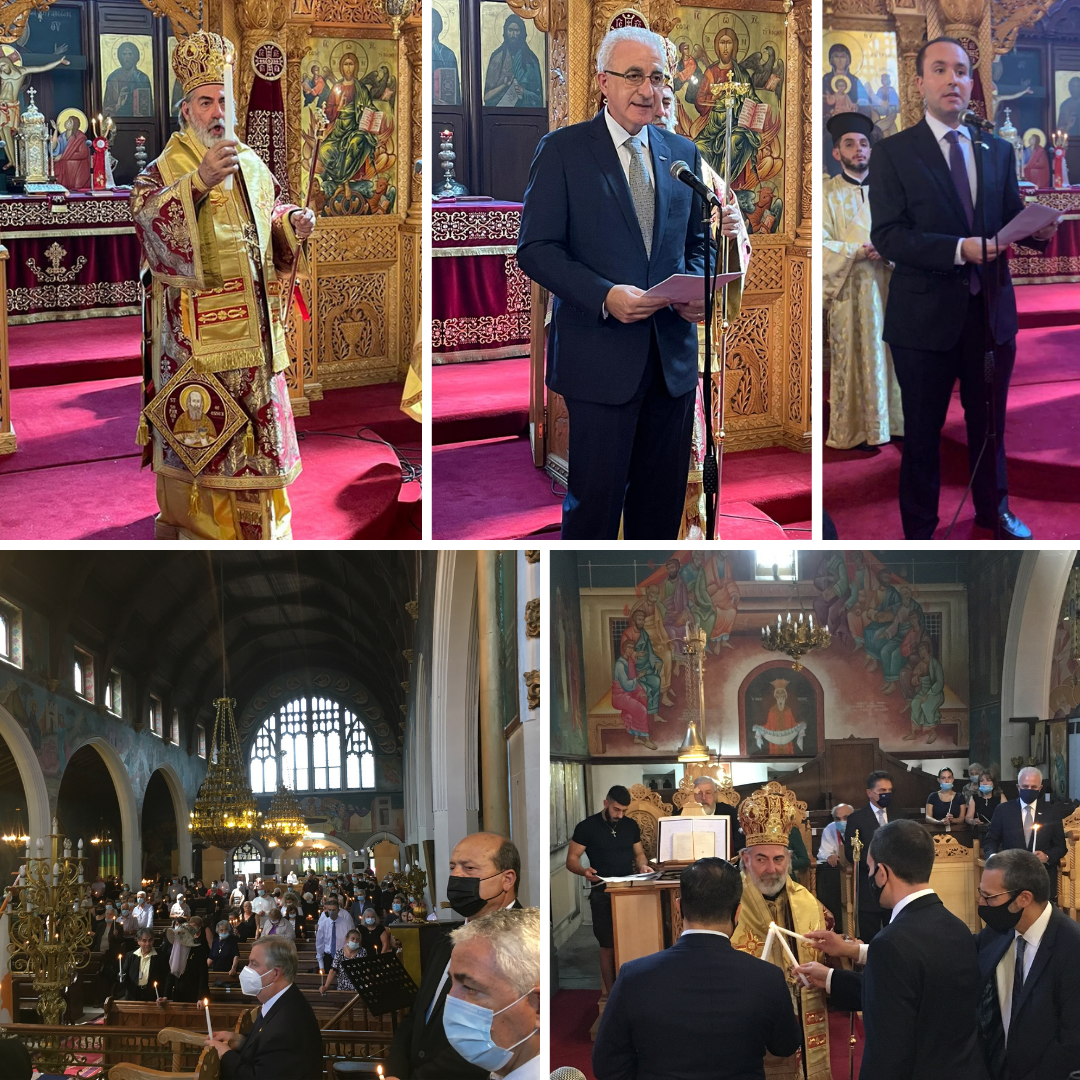 On Sunday 18th July 2021, the Greek Orthodox Archdiocese of Thyateria & Great Britain and the National Federation of Cypriots in the UK organised a memorial service to remember those who fell and sacrificed their lives defending Cyprus’ freedom in 1974, as well as to remember in prayer the missing persons of Cyprus.

His Eminence, Archbishop Nikitas of Thyateira and Great Britain officiated the Divine Liturgy, the Official Archiepiscopal Memorial Service and Supplicatory Prayers. The Memoriam Address was given by H.E. the High Commissioner of the Republic of Cyprus to the UK, Mr Andreas Kakouris, and the President of the National Federation of Cypriots in the UK, Mr Christos Karaolis, also addressed the congregation. The service was held at the St John the Baptist Greek Orthodox Church in north London and H.E. the Ambassador of Greece to the UK, Mr Ioannis Raptakis, was also present.

There was a collection at the memorial service, and across all Greek Orthodox Churches today, for the relief fund to support those affected by the recent forest fires in Cyprus.

In the Memoriam Address, the High Commissioner of the Republic of Cyprus to the UK, Mr Andreas Kakouris, said that “the struggle of the long-suffering Cypriot people continues. We owe it to our heroes and to all the victims of the Turkish invasion and occupation, to continue the struggle until their sacrifice is justified.”

Mr Kakouris reflected on Turkey’s long occupation by saying it has been “47 years of mourning for those killed during the invasion and unwavering anticipation for our missing persons, 47 years of violation of human rights and fundamental freedoms, 47 years as refugees.” He added, the invasion and its consequences were “not just a denial of our human rights, but a violent robbery of the lives that we did not get to live in the land of our birth. That land is still there, and is waiting for us patiently: waiting for the day that the refugees will return, when the occupying troops will leave, when our homeland will be reunified.”

Commenting on recent Cyprus issue developments, the High Commissioner said, “On 20th July [anniversary of Turkey’s invasion], we expect the President of Turkey to arrive in Cyprus illegally and announce new actions on Famagusta. We are clear: Whether it is the further opening of the [Varosi] coastal front, or the opening of a local park, or an entire district, these are still provocations and blatant violations of the relevant resolutions of the UN Security Council, which require the surrender of the region to the United Nations and its return to its legal residents.” He said that both President Anastasiades and Foreign Minister Nikos Christodoulides had been working hard to inform the EU and international community about Turkey’s intentions and warned them of the dangers of Turkey’s attempts to create new fait accompli. The High Commissioner also noted that the international community has urged Turkey to avoid escalations.

Mr Kakouris said that, for the Republic of Cyprus, “the path of peace, negotiation and stability is our only choice. We have an unwavering commitment to resuming substantive negotiations towards reunifying our country with a bi-zonal, bi-communal, federal solution with political equality as outlined by UN Security Council parameters: a single sovereignty, a single citizenship, and a single international personality, that is based on the principles and values of the EU.” He said that President Anastasiades will use all available diplomatic, political and legal means to pursue a solution “that will ensure the peace, security, progress and prosperity of all Cypriots, as well as future generations of Cypriots. A solution that will ensure Cyprus will remain a modern and functional member of the EU, without guarantees or foreign troops.”

The High Commissioner also thanked Archbishop Nikitas for his initiative to mark national memorial services for the invasion in all Greek Orthodox churches across the UK.

The President of the National Federation of Cypriots in the UK, Mr Christos Karaolis, gave an opening address. Mr Karaolis thanked all who fought courageously for the freedom of Cyprus against Turkey’s invasion in 1974. He said that “we all have a duty and obligation to remember and honour those who were killed defending Cyprus from the invasion of Turkey and the coup d’état, as well as praying for the discovery of fate of the missing persons.”

He said the invasion “brought pain, misery, destruction and death” but that we’ll never forget the “heroic national guardsman and their self-sacrifice and heroism at Pentemili, in the Pentadaktylos Mountains and elsewhere.”