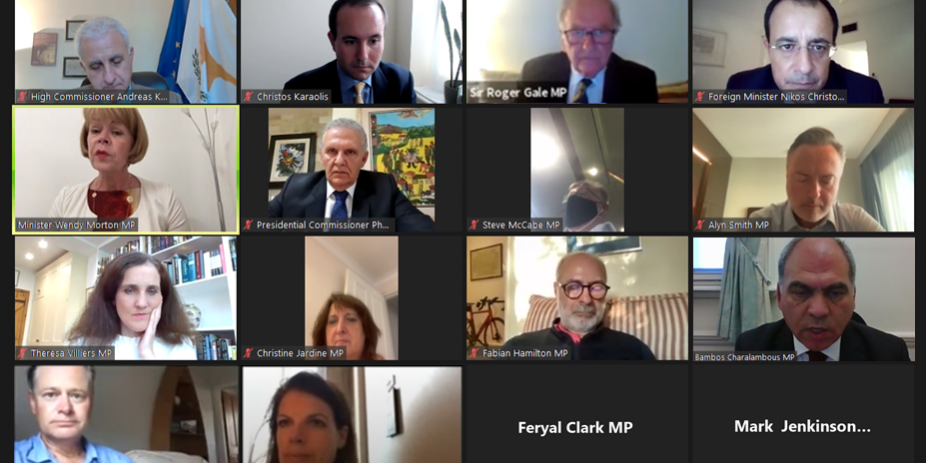 On Monday 19th July 2021, the National Federation of Cypriots in the UK and the All-Party Parliamentary Group (APPG) for Cyprus held their annual parliamentary meeting (virtually this year) to mark the tragic anniversary of Turkey’s invasion and continued occupation of Cyprus since 1974.

Welcoming the guests and viewers to the virtual event, Federation President Christos Karaolis, said that the 47 years of occupation “have been long, dark and painful years for our diaspora, many of whom are refugees and are desperate to return to their family homes.” He said that, “despite the sadness of this anniversary, our hope for a reunified island never dwindles and we believe that a Cyprus where Cypriots live and prosper together is both attainable and viable.” He also called for “meaningful consequences” for Turkey’s violations of UN Security Council resolutions on Varosha.

The Minister of Foreign Affairs of the Republic of Cyprus, Nikos Christodoulides, began his remarks by saying that today’s discussion “is timely and relevant, given that the Turkish President is currently on an illegal visit in the occupied areas of the Republic of Cyprus, to commemorate, in his usual provocative manner, the anniversary of the Turkish invasion of Cyprus, with the promise of announcing ‘surprises to the world'”.

Mr Christodoulides then gave a summary of the latest developments towards resuming negotiations on the Cyprus issue. He explained that an informal 5+UN meeting took place in Geneva in April but unfortunately did not lead to the “resumption of negotiations on the agreed basis of a bi-zonal bi-communal federation, from where the last process was suspended in Crans Montana, and in accordance with all relevant UN Security Council Resolutions.”

Foreign Minister Christodoulides also urged the UK Government to “convey a clear, unequivocal message to Turkey that there can be no discussion of Turkey’s preposterous position on the form of a solution to the Cyprus problem.” Moreover, he went on to say that UK must be clear that “there is no room, or appetite, in London for constructive ambiguity that is intended to conceal a solution that is two-state or confederal in substance, but appears on the outside as a bi-zonal, bi-communal federation.” He also said that the UK as a UN Security Council permanent member “must uphold all resolutions both on the Cyprus issue and on Varosha.”

The Minister for European Neighbourhood and the Americas, Wendy Morton MP, began her remarks by expressing her sympathy to those affected by the wildfire in Cyprus earlier this month. Ms Morton noted that despite the challenges of the pandemic, the relations between the UK and Cyprus have “gone from strength to strength” and both her and Foreign Secretary Dominic Raab have visited Cyprus recently. She said the visit “served as a warm reminder of the depth of our countries’ friendship.”

Speaking about the UK’s position in the recent informal 5+UN meeting on Cyprus in Geneva, Ms Morton said that the Foreign Secretary called for “all sides to demonstrate flexibility and compromise to find a solution to the Cyprus problem”. She said that the UK Government’s support for a solution should be “based on the existing parameters of a bi-zonal, bi-communal federation, with political equality. We believe these parameters are broad enough and flexible enough to accommodate the interests of both the Greek Cypriot and Turkish Cypriot communities, for the peace and security of a united island.”

Referring to the issue possible actions by Turkey on Varosha, Ms Morton said, “I know there is a great deal of concern about President Erdogan’s visit… the UK shares this concern.” Ms Morton also said that the UK “has been clear in its conversations with Ankara that they should refrain from actions that could undermine the chances of a settlement.” She continued, “the UK actively supports the various UN Security Council resolutions covering the issue of Varosha. In October last year, in response to the opening of the [Varosha] shoreline, the UK called for a UNSC session which concluded with a UNSC Presidential Statement calling for Turkish actions to cease and be reversed. We stand ready to work with Security Council members to ensure the Council responds to actions in Varosha in an appropriate manner.”

The Presidential Commissioner of the Republic of Cyprus, Photis Photiou, provided an update on the efforts to determine the fate of the missing persons. He said the missing persons issue “is a tragedy that causes so much pain and agony to hundreds of families, who are still waiting for nearly half a century to be informed about the fate of their loved ones.” Mr Photiou said “Turkey should provide the Committee on Missing Persons in Cyprus with all information in its military archives concerning burial sites.” He stressed that the missing persons tragedy “is a humanitarian issue rather than a political one” and said that, whether you are Greek Cypriot or Turkish Cypriot with missing relatives, “pain is the same”.

Sir Roger Gale MP, Chair of the APPG for Cyprus, said President Erdogan’s behaviour is “completely unacceptable”. Sir Roger emphasised that “all sides of the political divide in Britain are as one when it comes to the future of Cyprus”.

Labour’s Shadow Minister for Peace and Disarmament Fabian Hamilton said his party supports the abolishment of guarantees and the withdrawal of the Turkish occupation army as part of a bizonal, bicommunal federal solution, and added that a two-state outcome is “a non-starter”. Mr Hamilton expressed his deep concern over developments in Varosi and said he hoped President Erdogan “did not break UNSC Resolution”. In closing he said that Cyprus “is an island I love, an island that we want to see once again reunited. Let’s never, ever give up until that is achieved.”

SNP’s Foreign Affairs spokesperson Alyn Smith MP expressed his party’s support for a bi-zonal, bi-communal federation and noted that Cyprus is a rare issue where there is common ground across parties in the House of Commons.

The Liberal Democrats’ Christine Jardine MP said that a bi-zonal, bi-communal federation with political equality is not just the best, but the only way to uphold international resolutions, international law and human rights in Cyprus.

Conservative MP Theresa Villiers, Vice-Chair of the APPG, said it is time for the UK Foreign Secretary to advocate publicly for an end to third country guarantees in any future settlement, and asked for the international community’s condemnation of the unacceptable Turkish incursions in the Cyprus Exclusive Economic Zone and President Erdogan’s provocative decision to re-open of the beach front at Varosha.

Labour Party MP, Bambos Charalambous, also Vice-Chair of the APPG, said Turkey has been “clearly provocative” and that the international community has to do more to hold President Erdogan to account for his actions.

Closing the event, Mr Karaolis thanked Cyprus’ supporters in parliament and said “your actions can make a real and lasting change to the lives not only of your constituents and the 300,000 Britons with Cypriot origins, but the fate of an entire population asking for peace, justice and the restoration of human rights.”