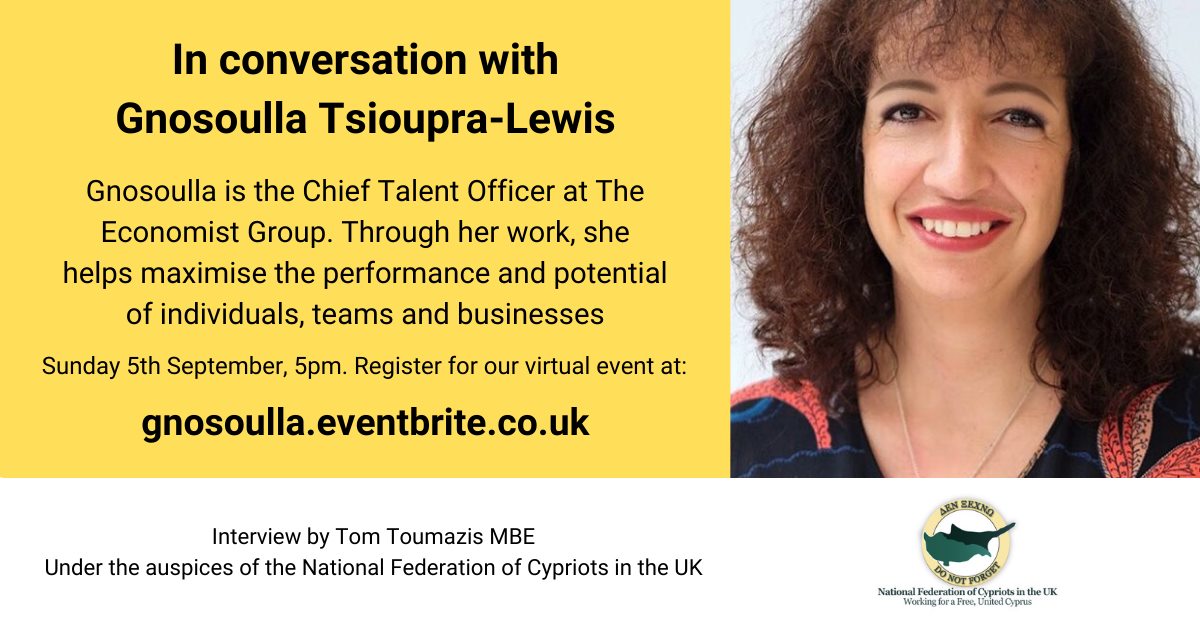 On Sunday 5th September, Gnosoulla Tsioupra-Lewis will be interviewed by Tom Toumazis MBE, under the auspices of the National Federation of Cypriots in the UK. The event will be broadcast live and will start at 5pm. The interview will cover Gnosoulla’s fascinating life and career, her inspiring work improving diversity and inclusion in the workplace, and her top tips for applying for jobs and advancing your career.

To watch, register at gnosoulla.eventbrite.co.uk

Gnosoulla Tsioupra-Lewis was born and raised in north London, to parents who were both active members of the UK Cypriot community. She studied Law and Russian at the University of Surrey and then worked as a lawyer for Baker and McKenzie after graduating. Gnosoulla eventually moved to UBM, where she spent around 19 years working in various roles including Group Employment Lawyer, and Senior Vice-President Global HR for Europe, the Middle East and Africa. After leaving UBM, Gnosoulla became Chief People Officer at The Telegraph in 2018 where she worked on attracting, engaging and developing talent throughout the organisation. In September 2020, she moved to The Economist Group to become Chief Talent Officer. Through her senior leadership roles, Gnosoulla has worked to maximise the performance and potential of people, teams and organisations. She has also worked hard to successfully develop more inclusive and diverse workplaces.

Interviewer, Tom Toumazis MBE, has a 35-year career in the entertainment, media and the technology industry working at companies such as ITV, Disney and Yahoo. More recently Tom has moved to investing in start-ups and has a portfolio focused in technology, media, and the arts. Tom is also a Trustee of the NSPCC.