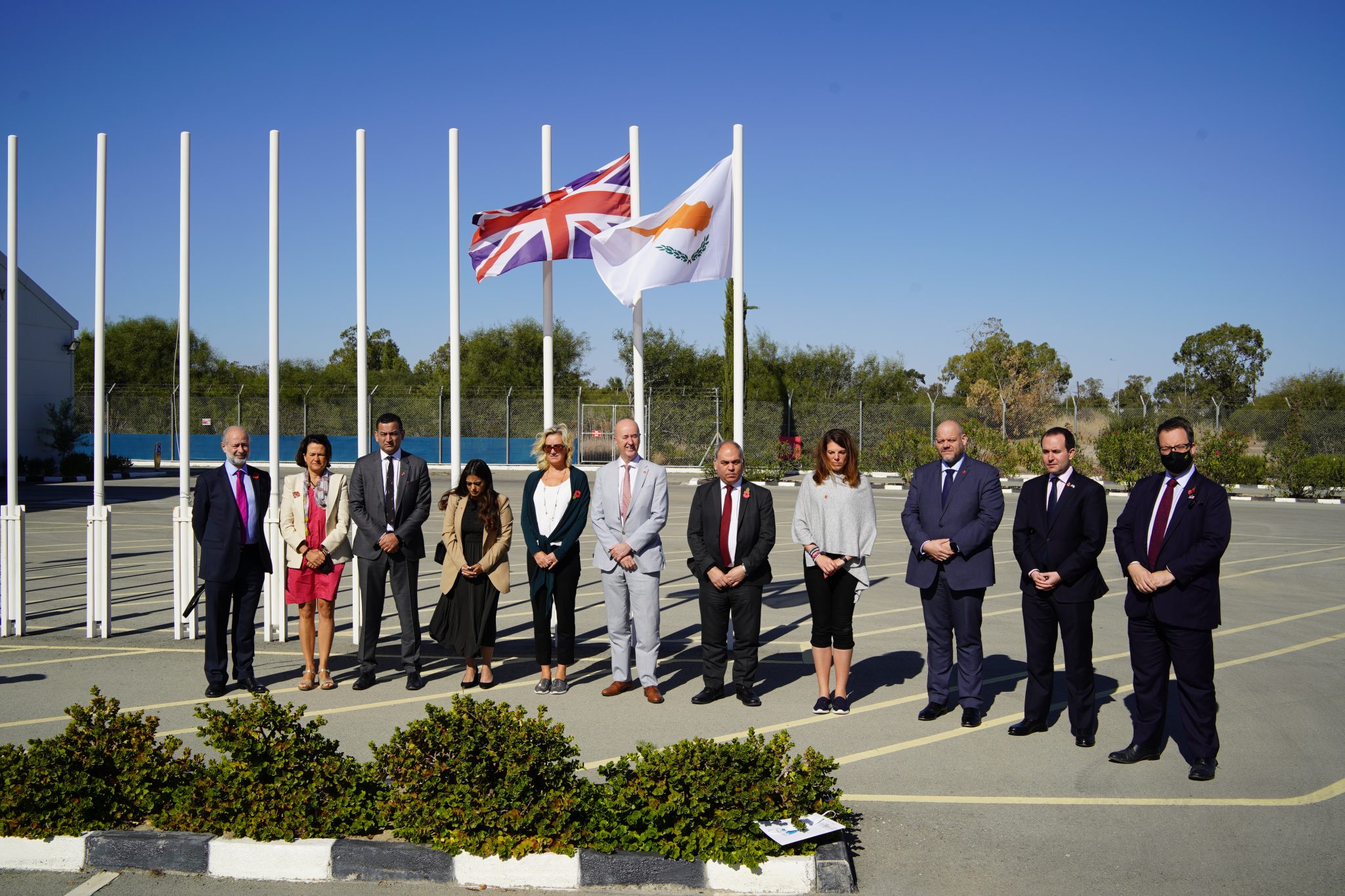 Reflecting on the trip, delegation co-leader, Caroline Nokes MP commented, “The visit enabled me and my colleagues from the Cyprus APPG to engage with key decision-makers on the island, about the ongoing efforts to restart reunification negotiations, the important strengthening of U.K.-Cyprus security cooperation and Cyprus’ critical role in the Eastern Mediterranean. We also witnessed first-hand the tragic consequences of Turkey’s continued occupation.

“We leave Cyprus with a re-doubled collective commitment to ensure that the British Government is doing its utmost to reunite Cyprus as a bizonal, bicommunal federation, with political equality as outlined in UN Security Council Resolutions.

On his part, Bambos Charalambous MP said, “The APPG’s visit was timely given the recent appointment of the UN Secretary General’s Special Representative and Head of the United Nations Peacekeeping Force in Cyprus (UNFICYP). We are all hopeful that meaningful negotiations can resume soon, but for this to happen Turkey must drop its insistence for partition of the island. The U.K., EU and UN are all clear that the only basis for a solution is a bizonal, bicommunal federation in line with the existing UN framework. It was also clear from our discussions on the island that the only acceptable solution is one that is within the existing UN framework.

“I was encouraged when we spoke with civil society groups from both communities to hear that there continues to be strong support for reunification amongst the grass roots.

“We are clear from our visit that after 47 years of occupation, it is time for Cyprus and its people to finally be reunited. We will take this message back to Westminster and continue our active support for this just cause.” 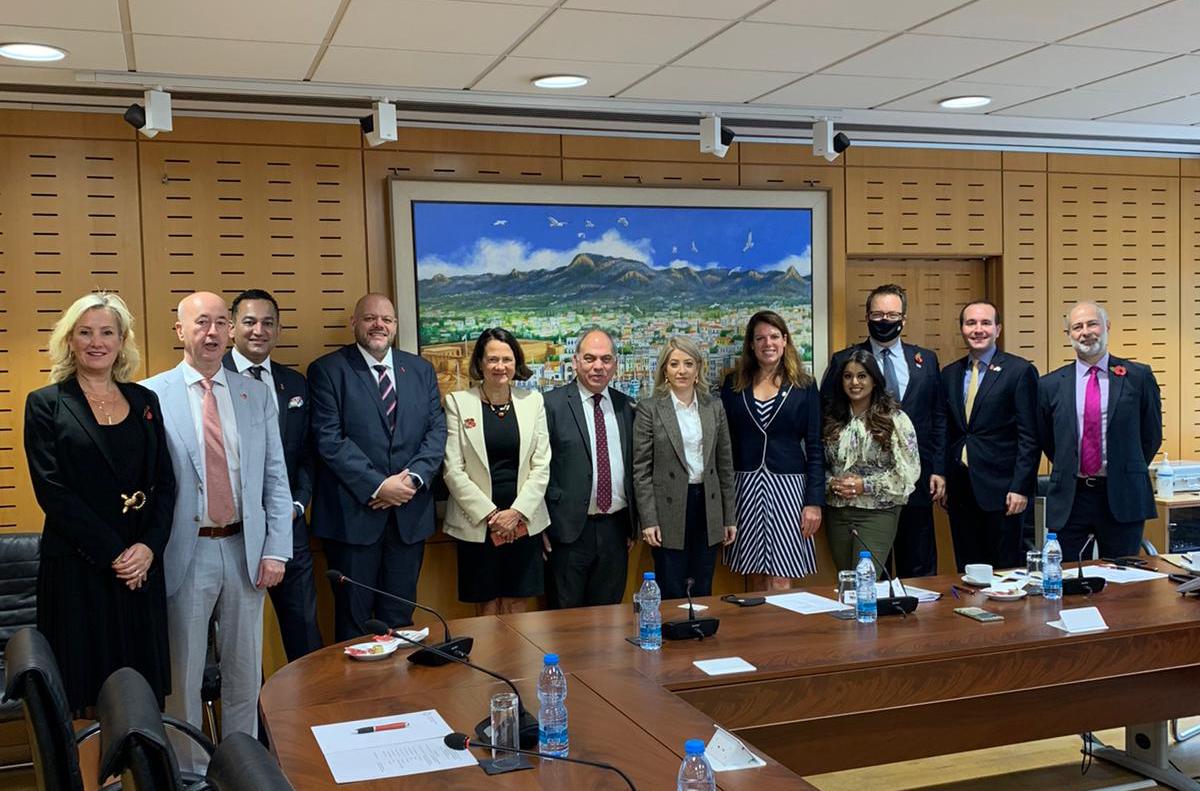 The delegation met with the President of the House of Representatives, Annita Demetriou MP, to discuss expanding inter-parliamentary collaboration between the British Parliament and the House of Representatives of the Republic of Cyprus. In particular, they discussed the mutual importance that the UK and Cyprus place on defending parliamentary democracy around the world, as well as opportunities for promoting equality and environmental issues through parliamentary platforms.

The British High Commissioner to the Republic of Cyprus Stephen Lillie also celebrated the close connections between the UK and Cyprus with a reception he hosted for the delegation at his official residence. The reception was attended by political, business and civil society contacts from all communities on the island. 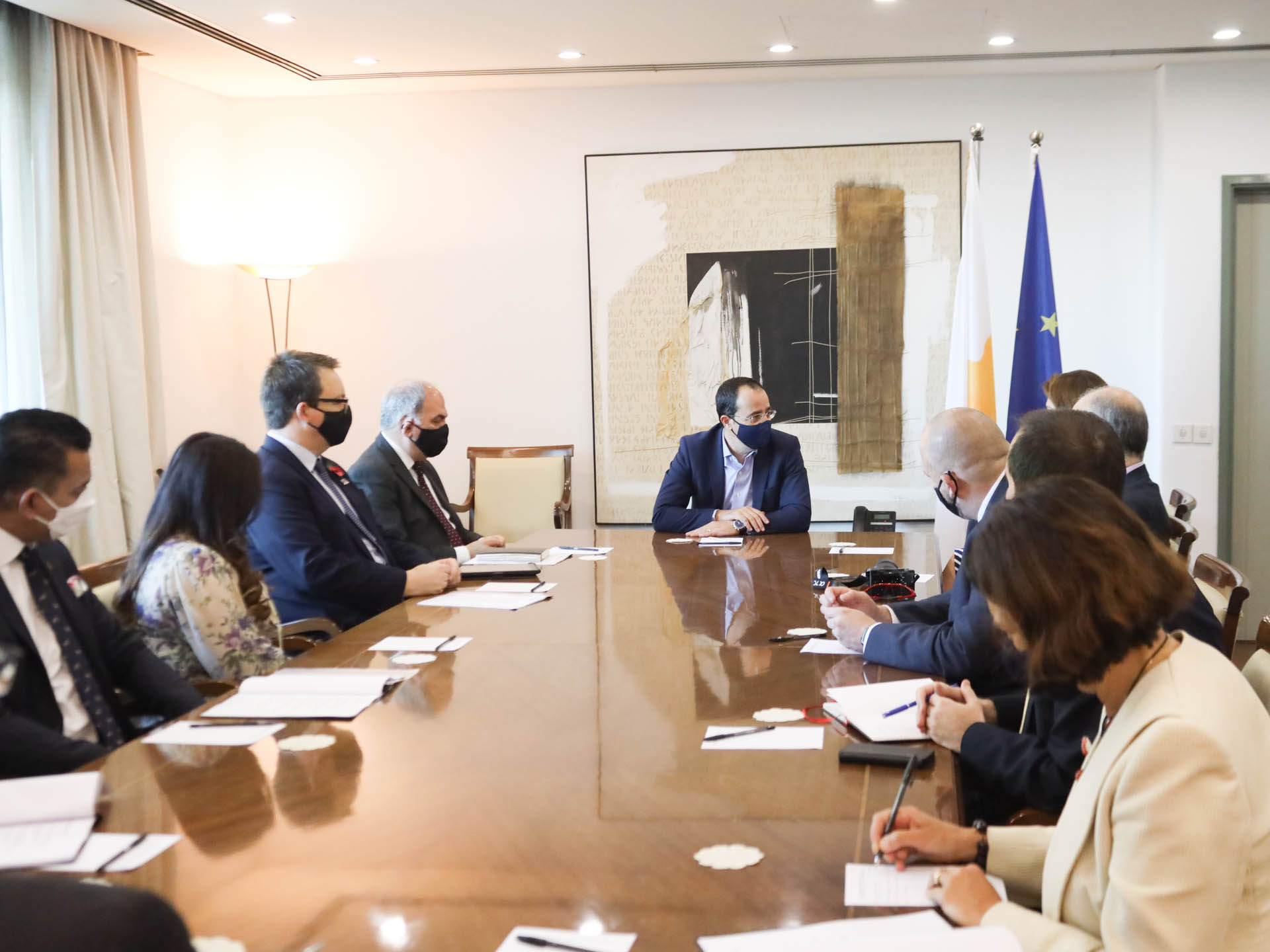 The delegation was also briefed on the latest developments on the Cyprus issue from the Minister of Foreign Affairs of Cyprus, Mr Nikos Christodoulides. The discussion focussed on prospects for resuming negotiations towards a bi-zonal, bi-communal federal solution, Turkey and Turkish Cypriot leader Tatar’s unacceptable partition plans for Cyprus, and Turkey’s provocations in Cyprus’ Exclusive Economic Zone (EEZ). They also spoke about the growin UK-Cyprus relations and possible opportunities for even closer cooperation in the future. They also met with the House of Representatives Standing Committee on Foreign and European Affairs and its Chair, Harris Georgiades MP. 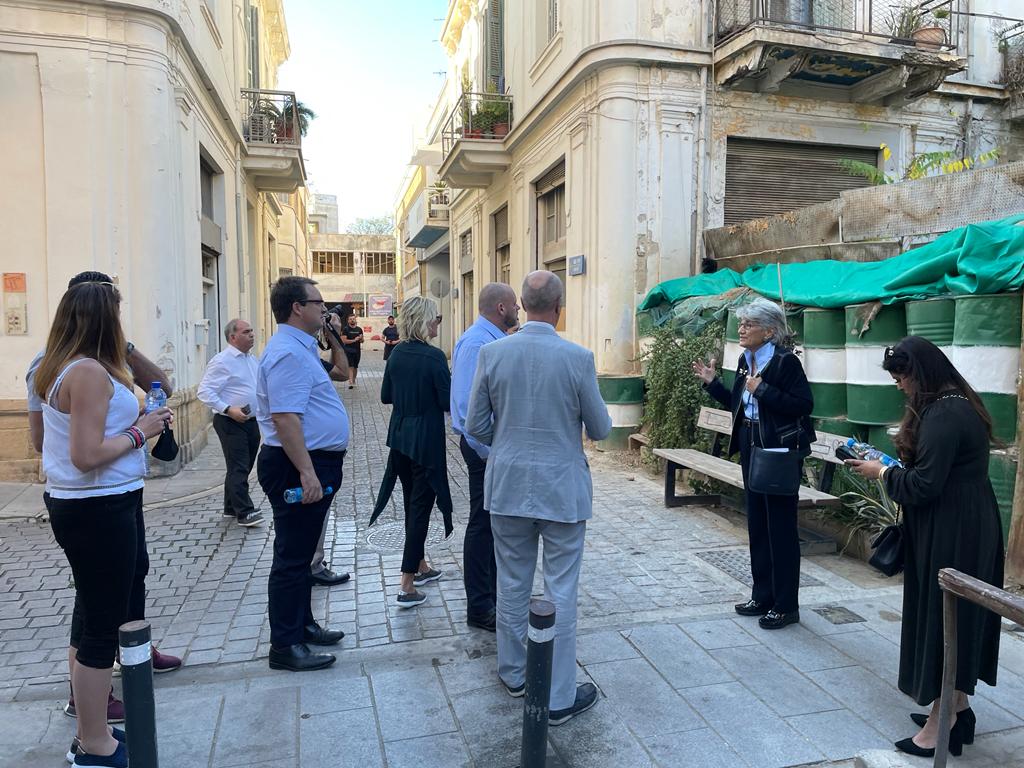 The group also had the opportunity to witness first-hand the consequences of Turkey’s invasion of Cyprus in 1974 and ongoing occupation, as well as its impact on many thousands of UK Cypriots who were made refugees. The delegation visited Deryneia and met with the Mayor of Famagusta, Dr Simos Ioannou, and saw the occupied town of Famagusta and the fenced off area of Varosi from the Famagusta Viewpoint. The delegation also met with the Mayors of the occupied towns of Keryneia, Morphou, Akanthou, Lefkoniko, and Kythrea to hear about the plight of Cypriot refugees following Turkey’s invasion in 1974 and their hopes of returning to their homes following a solution to the Cyprus issue. The MPs were also given a guided tour of the Green Line in Nicosia, the world’s last divided capital city, by refugee Titina Loizidou.

On the sidelines of the trip, Bambos Charalambous MP, Fabian Hamilton MP, Catherine West MP, and Federation President Christos Karaolis met with civil society groups at the Home for Cooperation in Nicosia, during which there was clear and positive support for reunification. 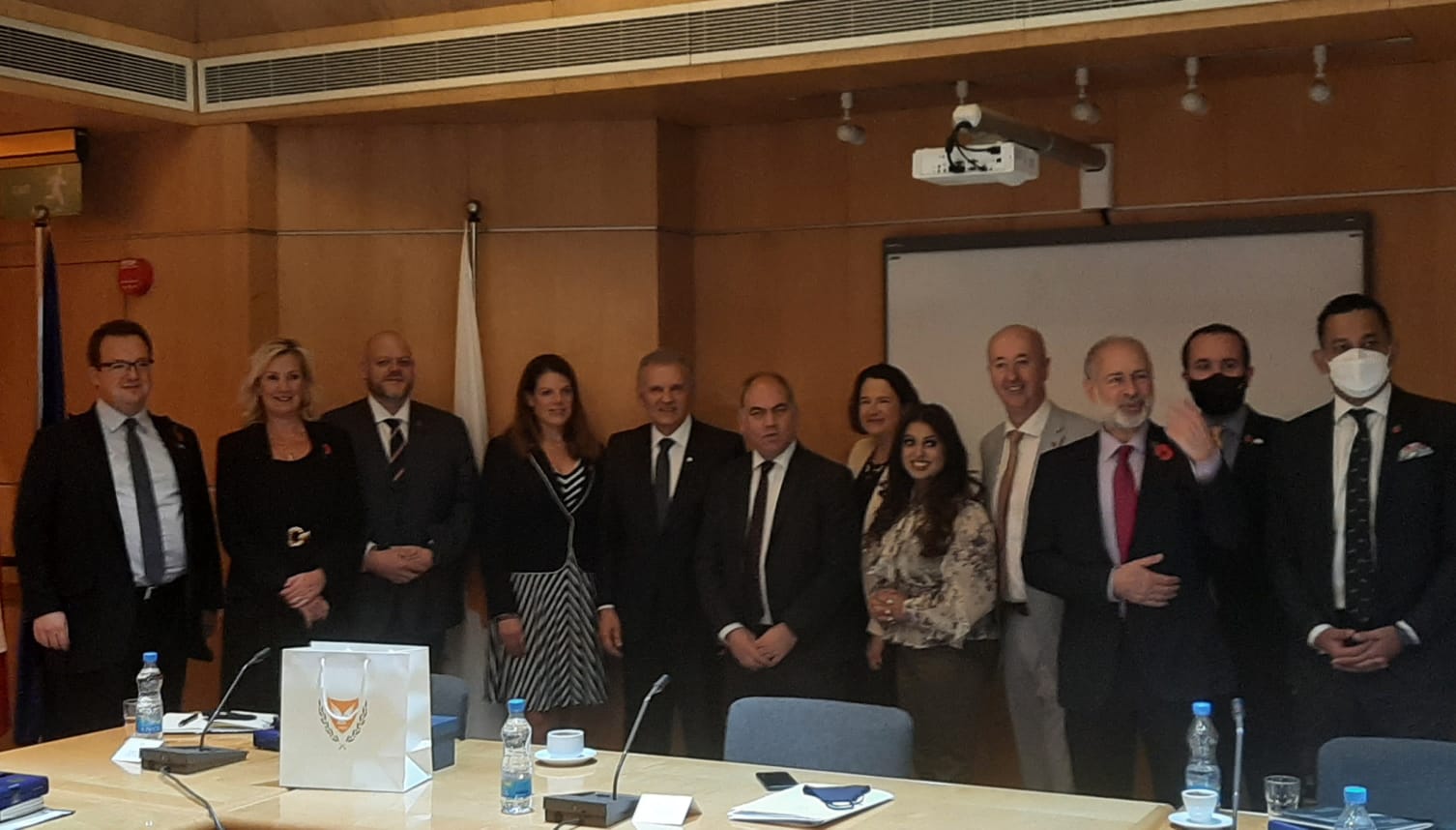 The APPG for Cyprus delegation also met with Presidential Commissioner Photis Photiou to discuss the tragic humanitarian issue of the missing persons of Cyprus, the enclaved Greek Cypriots living in Rizokarpasso, and the systematic destruction of cultural heritage in the occupied areas of Cyprus. They exchanged views about the steps that can be taken to determine the fate of the missing persons issue, including the sharing of relevant information from Turkish military archives. 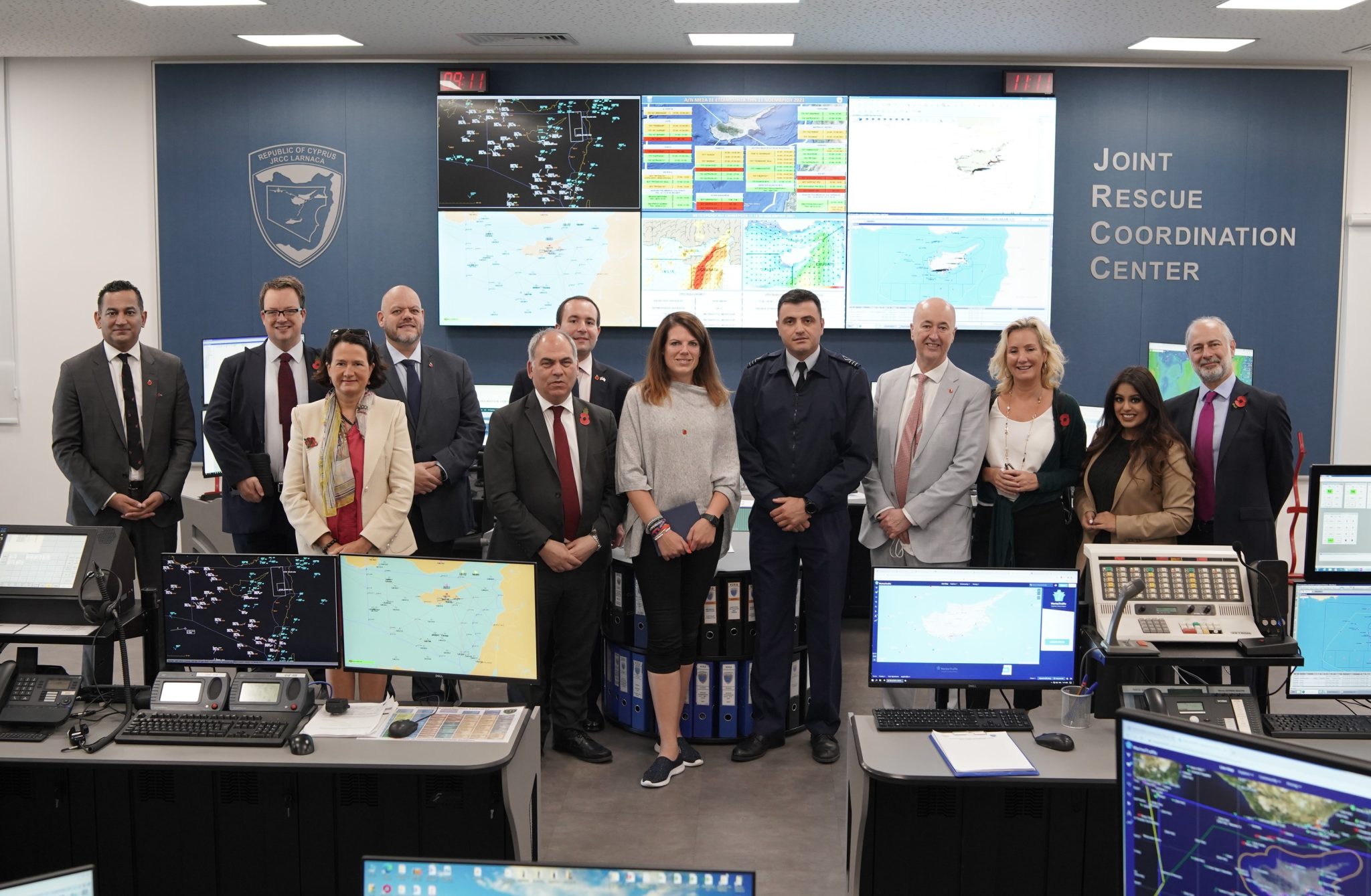 The group of MPs also visited the Joint Rescue Joint Rescue Coordination Center (JRCC) in Larnaka for a briefing on Cyprus search and rescue plans and UK-Cyprus collaboration in this area. Whilst at the JRCC facility in Larnaka, the delegation also marked Armistice Day with a minute silence.