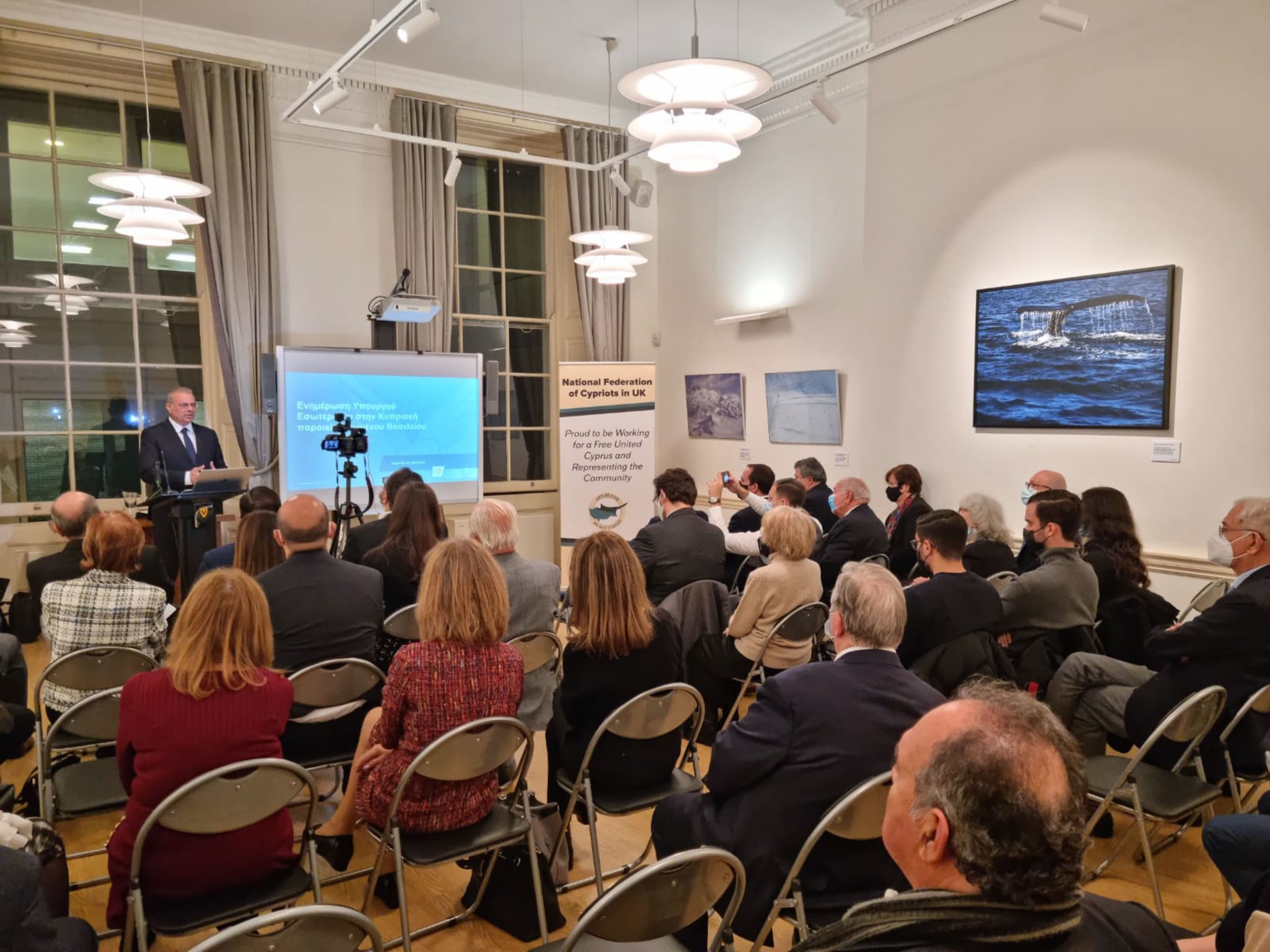 The developments on the Cyprus issue, the migration crisis, the housing policy of the Ministry and the additional support for the consulate of the High Commission were among others, the issues discussed between the Minister of Interior Mr. Nicos Nouris and the Secretariat of the National Federation of Cypriots in the UK and Executive Committee of NEPOMAK UK. The meeting was hosted by the National Federation of Cypriots in the UK at the High Commission of the Republic of Cyprus in London on Tuesday, November 22, 2021.

In his remarks, Minister Nouris stated that despite the difficulties due to the Turkish intransigence, President Anastasiades continues to lead the efforts for resumption. of negotiations. The Minister stressed that, “it is time for everyone to understand that there must be solidarity and unity on amongst all Cypriots, because there is only one enemy to the reunification of Cyprus: It is Turkey that is systematically trying to impose its expansionist plans to the detriment of the Republic of Cyprus.”

He added that “the only way we can resist these plans is unity, and of course the continuance and enhancement of the bilateral and trilateral and agreements that will be the bulwark of opposition to Turkey’s expansionist agenda.”

Referring to some of the policies related to the responsibilities of the Ministry, Minister Nouris spoke about the recent migration crisis. He stressed that, “for the 5th consecutive year, our small country is recording an undesirable first as the Member State of the European Union with the largest number of asylum applications by population.”

He said that Turkey systematically transports illegal immigrants to the occupied areas. The Government’s priority, he added, is effectively controlling illegal migration flows, mainly on restricting flows through the green line.

In his briefing on the housing policy of the Ministry of Interior, Mr. Nouris expressed his satisfaction with the interest demonstrated in terms of home ownership plans in mountainous, remote and disadvantaged areas as well as the countryside, noting that interest shown has exceeded all expectations.

Referring to the housing policy for Cypriot refugees, he said that the budget secured has increased from € 41 million in 2018, to € 76 million in 2021.

In his statement after the discussion with the diaspora leadership, the Minister said that he had the opportunity to discuss with “members of our diaspora, who represent us here with dignity, to identify solutions to a number of problems they face, for which the Ministry of Interior will work to provide concrete solutions as it has done recently by securing additional support for the Consular team at High Commission in London”.

In his welcome remarks, addressing Mr. Nouris, the President of the National Federation of Cypriots in the UK, Christos Karaolis, said that “I know that you are working very closely with the High Commissioner and the Consul General here in London to improve the citizenship application process for our community and we are grateful.”

He went on to say that “without wishing to enter into a debate on the pros and cons of Brexit, this gave the Republic of Cyprus a unique opportunity to naturalize the 2nd, 3rd and 4th generations of our diaspora, as other European countries have done with their own diaspora.”

Referring to the recent visit of a delegation of the All-Party Parliamentary Group (APPG) to Cyprus, he assured the Minister that “the British MPs were fully briefed that more than 4% of the population of the island are now migrants or asylum seekers, with the overwhelming arrivals coming illegally through the occupied territories via the Green Line. This caused a vibrant debate, as the issue of immigration is a very topical issue here in the UK right now, with more than 1,000 people passing through the channel every day in recent days.”

Speaking about the Cyprus issue, he said that “the Federation and member associations continue to actively support the efforts of the President and the people of Cyprus to end the Turkish occupation and reunify Cyprus.” He added that “unfortunately, Turkey and the Turkish Cypriot leader continue to work for the division and creation of two states on our island. However, this will not deter us from continuing to advocate for a reunited Cyprus where all its people can live and prosper together.”

A reception followed and the Minister and the High Commissioner had the opportunity to exchange views and opinions on immigration, naturalizations and our national issue.