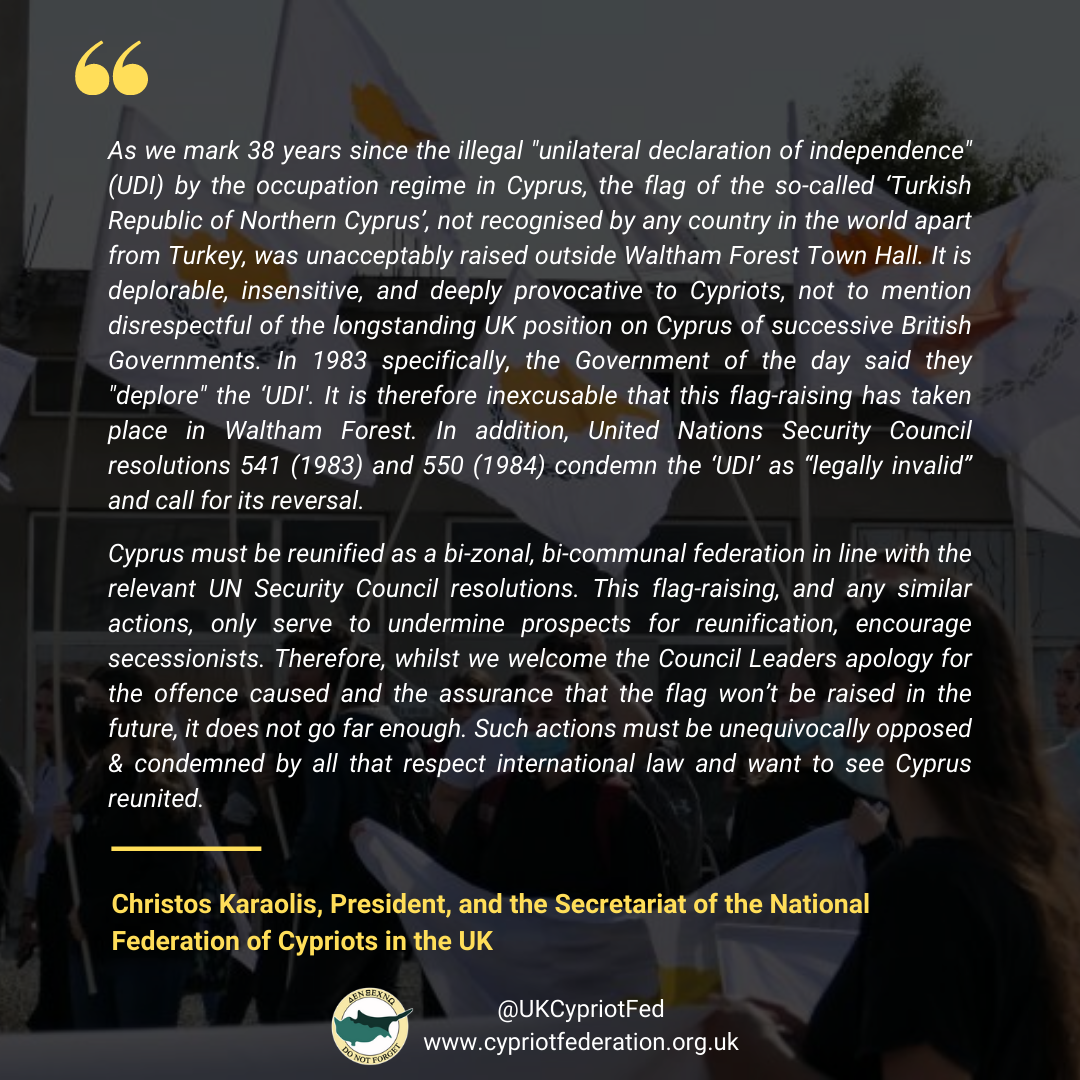 Yesterday, on the 38th anniversary of the illegal ‘UDI’ by the secessionist, occupation regime in Cyprus, a few individual councillors raised the flag of the so-called ‘TRNC’ outside Waltham Forest Town Hall. The National Federation of Cypriots in the UK has issued a statement condemning the flag-raising and the Leader of Waltham Forest Council, Grace Williams, has issued a statement of apology. Theresa Villiers MP, Chipping Barnet, has also issued a statement condemning the action. John Cryer MP, Leyton and Wanstead, has condemned the flag-raising and those responsible in his role as a local MP for the area.

“As we mark 38 years since the illegal “unilateral declaration of independence” (UDI) by the occupation regime in Cyprus, the flag of the so-called ‘Turkish Republic of Northern Cyprus’, not recognised by any country in the world apart from Turkey, was unacceptably raised outside Waltham Forest Town Hall. It is deplorable, insensitive, and deeply provocative to Cypriots, not to mention disrespectful of the longstanding UK position on Cyprus of successive British Governments. In 1983 specifically, the Government of the day said they “deplore” the ‘UDI’. It is therefore inexcusable that this flag-raising has taken place in Waltham Forest. In addition, United Nations Security Council resolutions 541 (1983) and 550 (1984) condemn the ‘UDI’ as “legally invalid” and call for its reversal.

“Cyprus must be reunified as a bi-zonal, bi-communal federation in line with the relevant UN Security Council resolutions. This flag-raising, and any similar actions, only serve to undermine prospects for reunification, encourage secessionists. Therefore, whilst we welcome the Council Leaders apology for the offence caused and the assurance that the flag won’t be raised in the future, it does not go far enough. Such actions must be unequivocally opposed & condemned by all that respect international law and want to see Cyprus reunited”

Christos Karaolis, President, and the Secretariat of the National Federation of Cypriots in the UK

A message to the community from Leader of the Council Grace Williams: 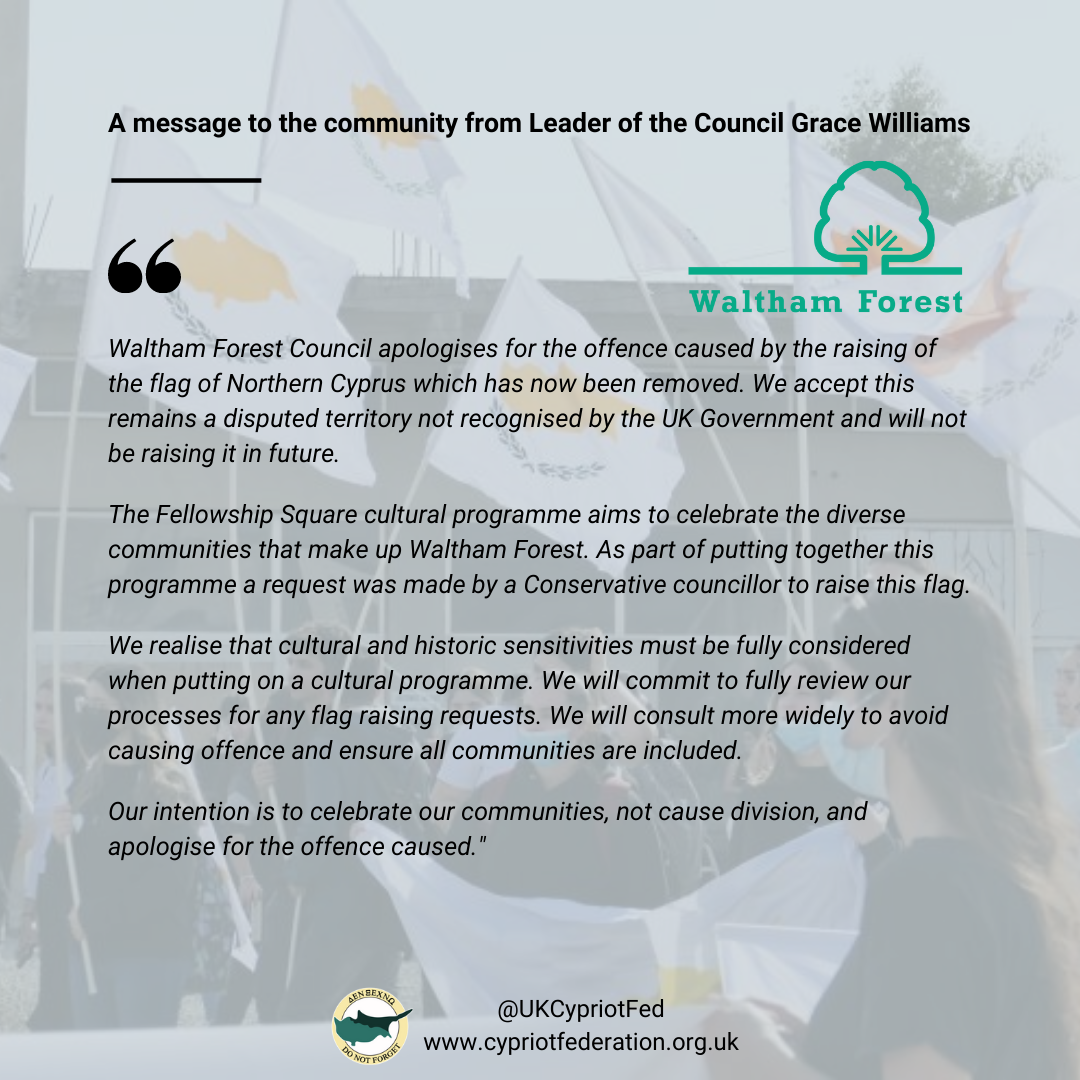 “Waltham Forest Council apologises for the offence caused by the raising of the flag of Northern Cyprus which has now been removed. We accept this remains a disputed territory not recognised by the UK Government and will not be raising it in future.

“The Fellowship Square cultural programme aims to celebrate the diverse communities that make up Waltham Forest. As part of putting together this programme a request was made by a Conservative councillor to raise this flag.

“We realise that cultural and historic sensitivities must be fully considered when putting on a cultural programme. We will commit to fully review our processes for any flag raising requests. We will consult more widely to avoid causing offence and ensure all communities are included.

“Our intention is to celebrate our communities, not cause division, and apologise for the offence caused.” 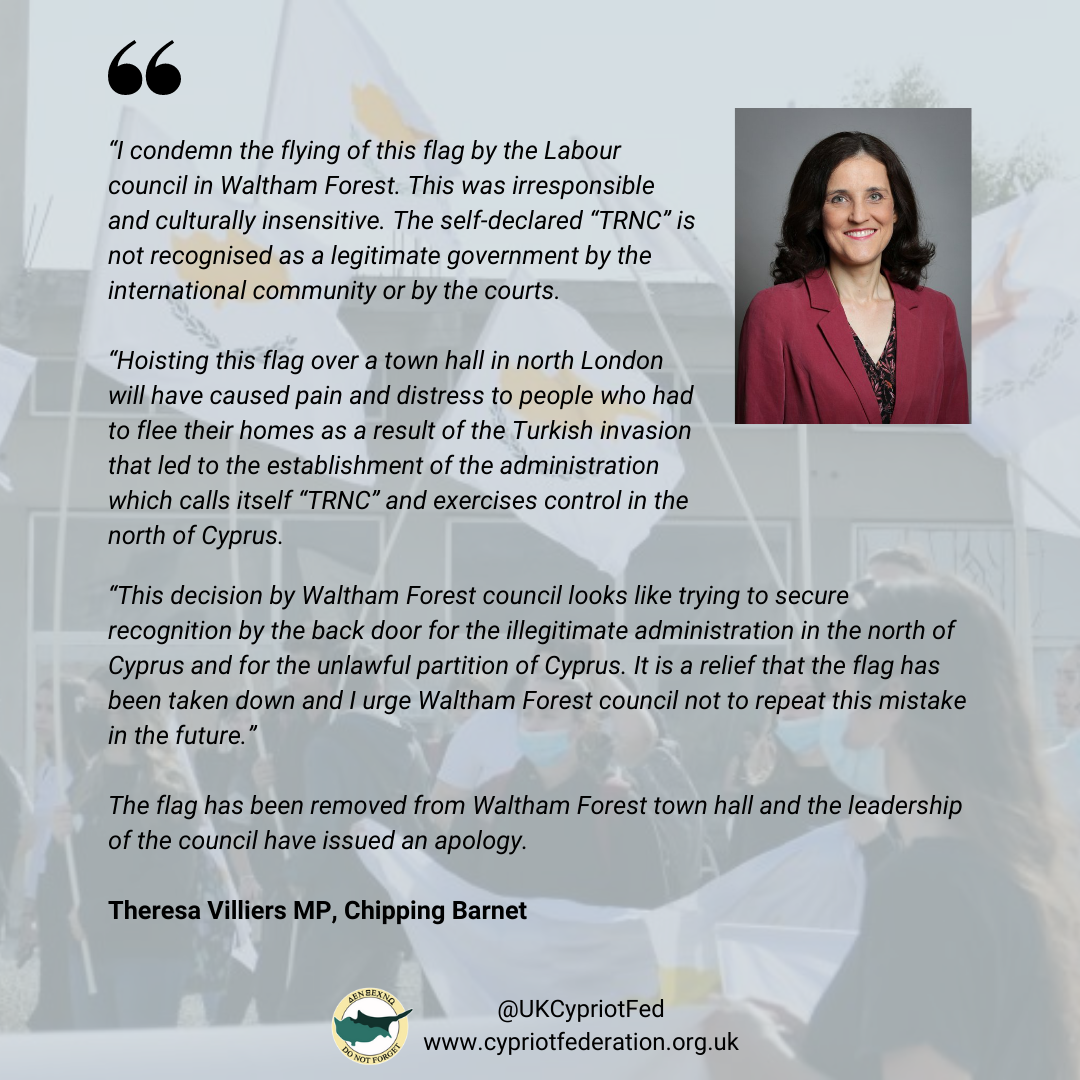 “I condemn the flying of this flag by the Labour council in Waltham Forest. This was irresponsible and culturally insensitive. The self-declared “TRNC” is not recognised as a legitimate government by the international community or by the courts.

“Hoisting this flag over a town hall in north London will have caused pain and distress to people who had to flee their homes as a result of the Turkish invasion that led to the establishment of the administration which calls itself “TRNC” and exercises control in the north of Cyprus. 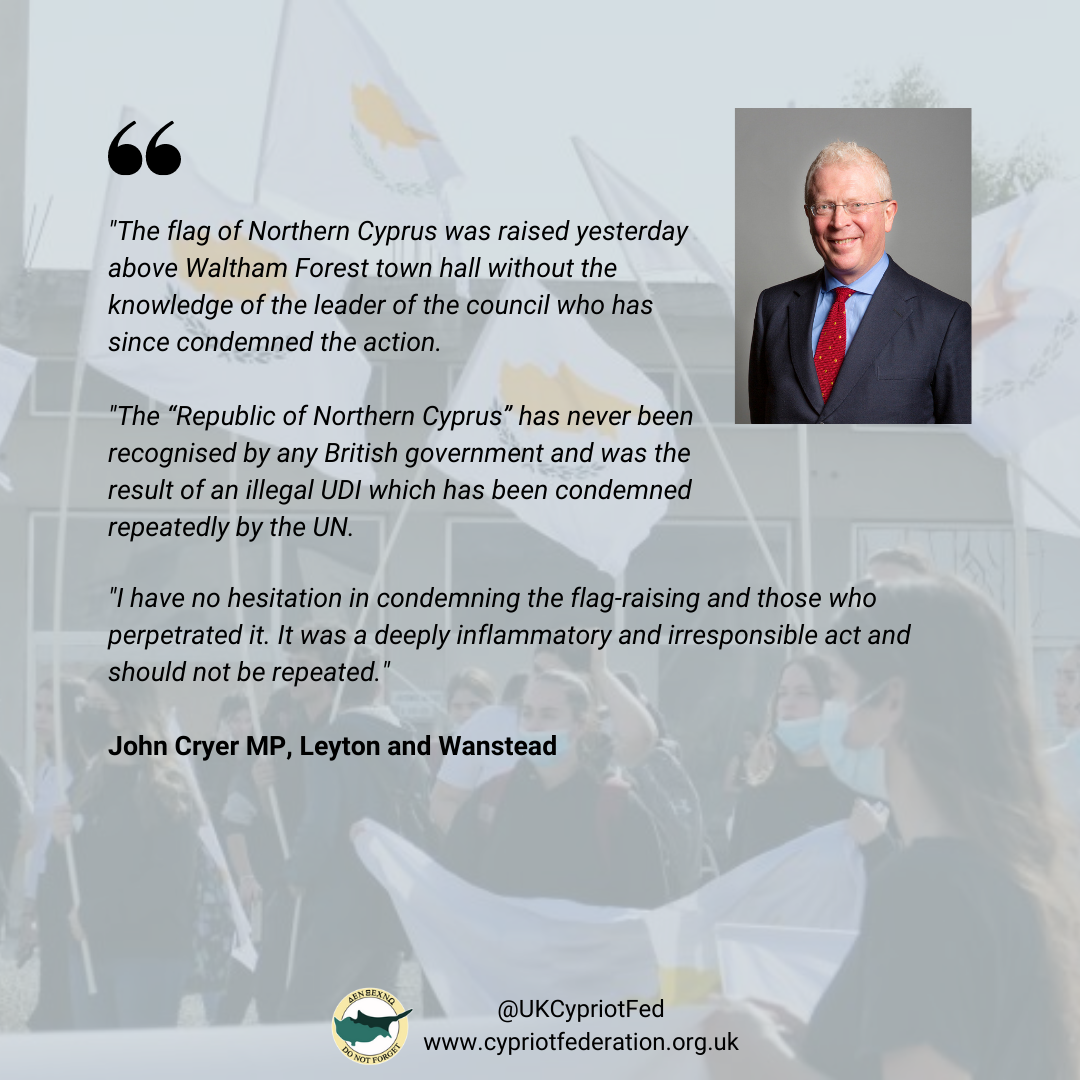 John Cryer MP, Leyton and Wanstead, has condemned the flag-raising and those responsible in his role as a local MP for the area.

“The flag of Northern Cyprus was raised yesterday above Waltham Forest town hall without the knowledge of the leader of the council who has since condemned the action.

“The “Republic of Northern Cyprus” has never been recognised by any British government and was the result of an illegal UDI which has been condemned repeatedly by the UN.

“I have no hesitation in condemning the flag-raising and those who perpetrated it. It was a deeply inflammatory and irresponsible act and should not be repeated.” 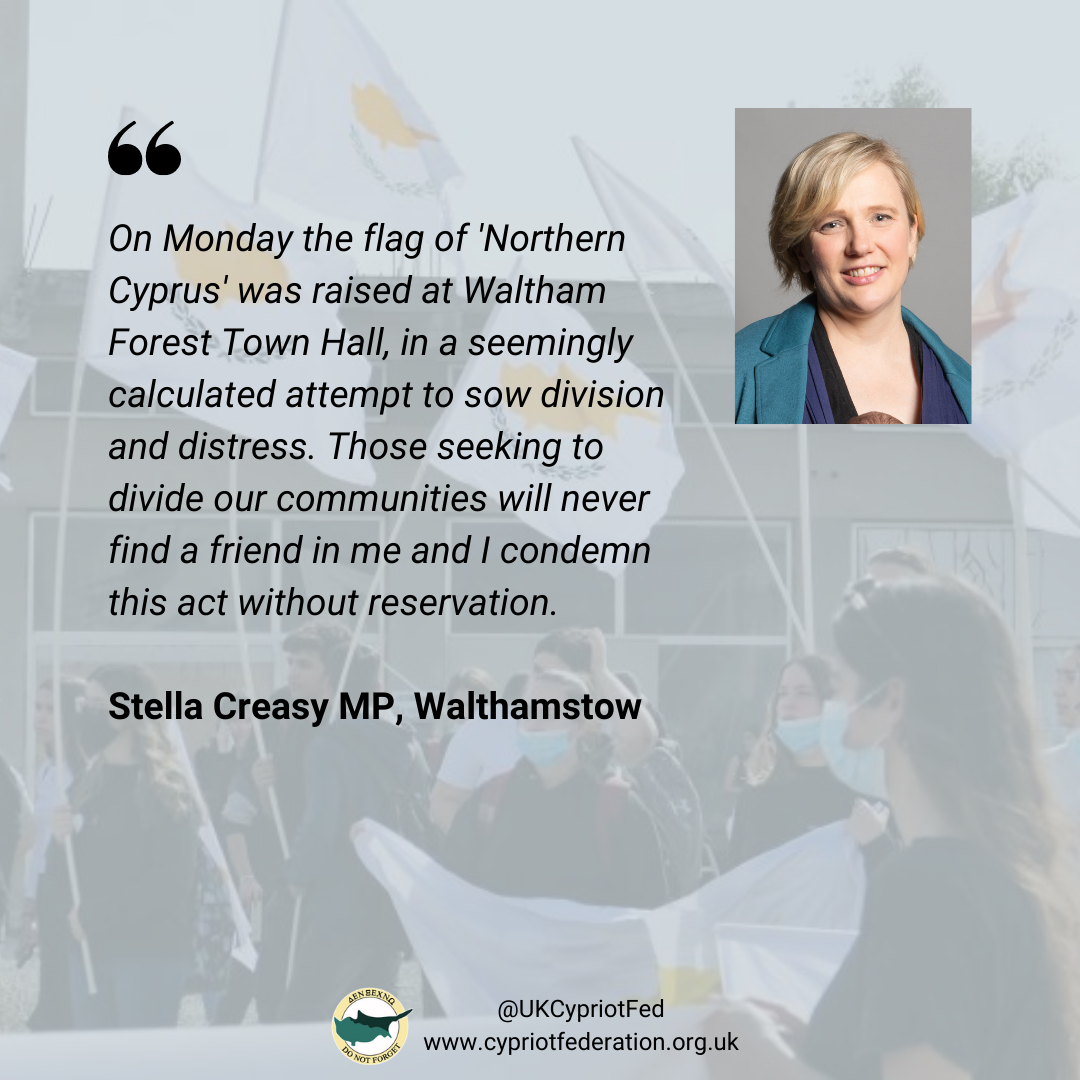 “On Monday the flag of ‘Northern Cyprus’ was raised at Waltham Forest Town Hall, in a seemingly calculated attempt to sow division and distress. Those seeking to divide our communities will never find a friend in me and I condemn this act without reservation.”
Recent Posts
Upcoming Events