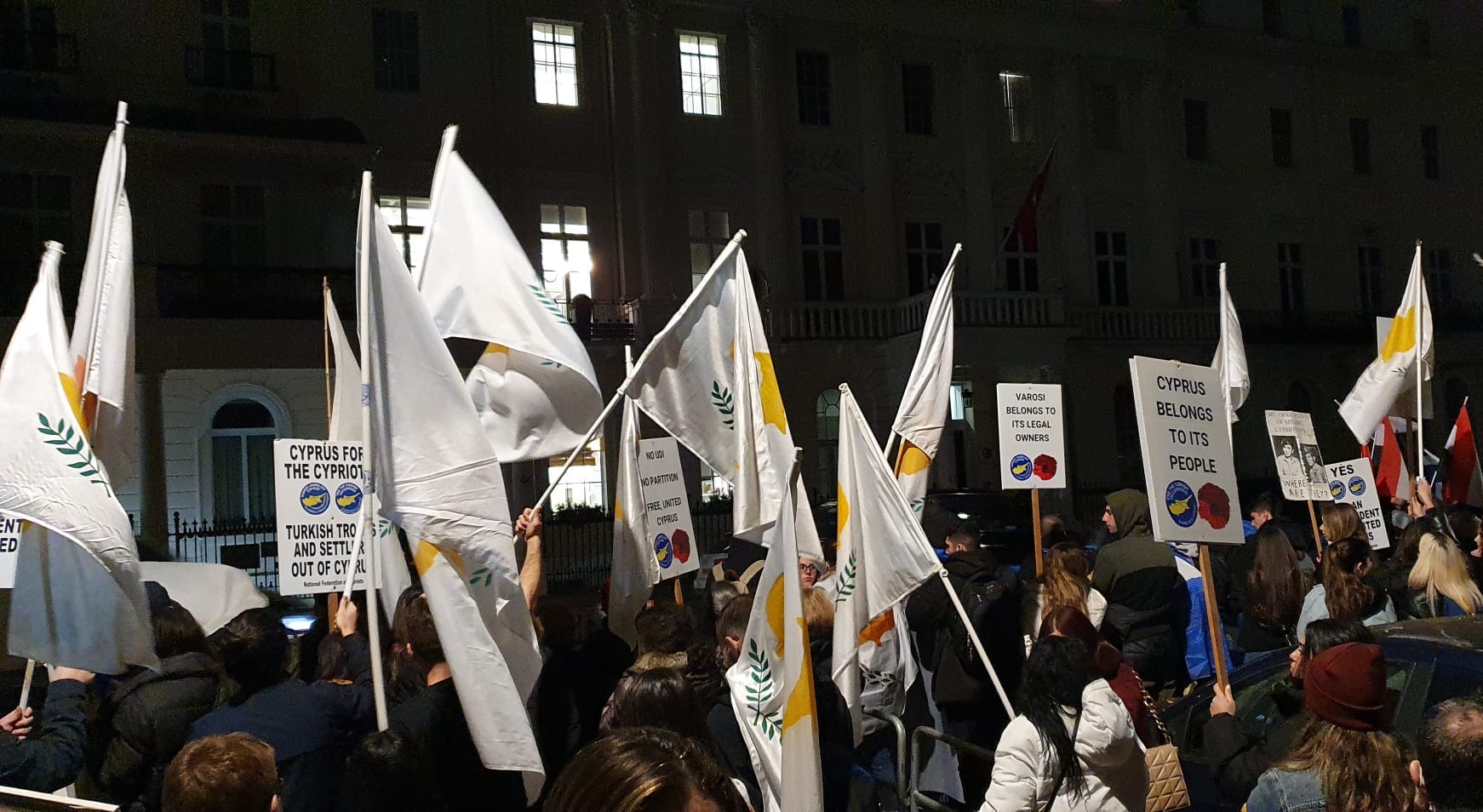 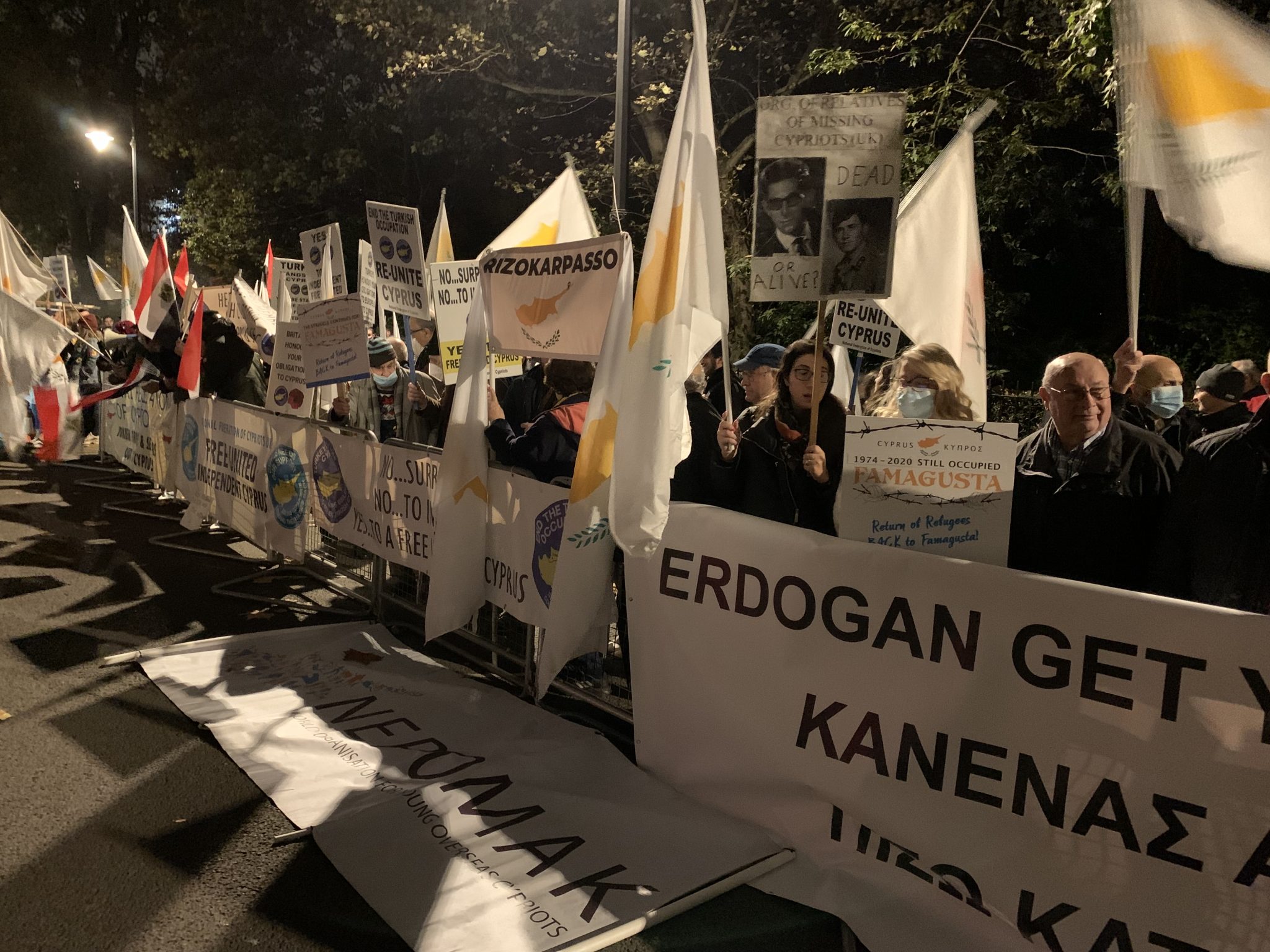 38 years to the day since the ‘unilateral declaration of independence (UDI)’ by the non-recognised, secessionist regime in the occupied areas of Cyprus, over 300 people protested outside the Turkish Embassy in London to voice their demands for a free, united Cyprus; the reversal of the illegal ‘UDI’; and the end of Turkey’s ongoing occupation of more than a third of Cyprus. The United Nations condemned the illegal ‘UDI’, declared it “legally invalid” and called for it to be “withdrawn” through UN Security Council resolutions 541 (1983) and 550 (1984).

UK Cypriots and Cypriot students travelled from across London and from as far as Manchester, Leeds, Cardiff, Swansea, Reading, and Essex to take part in the protest. Representatives of the Armenian and Egyptian diasporas in the UK were also in attendance to show their solidarity with Cyprus against injustice by Turkey. 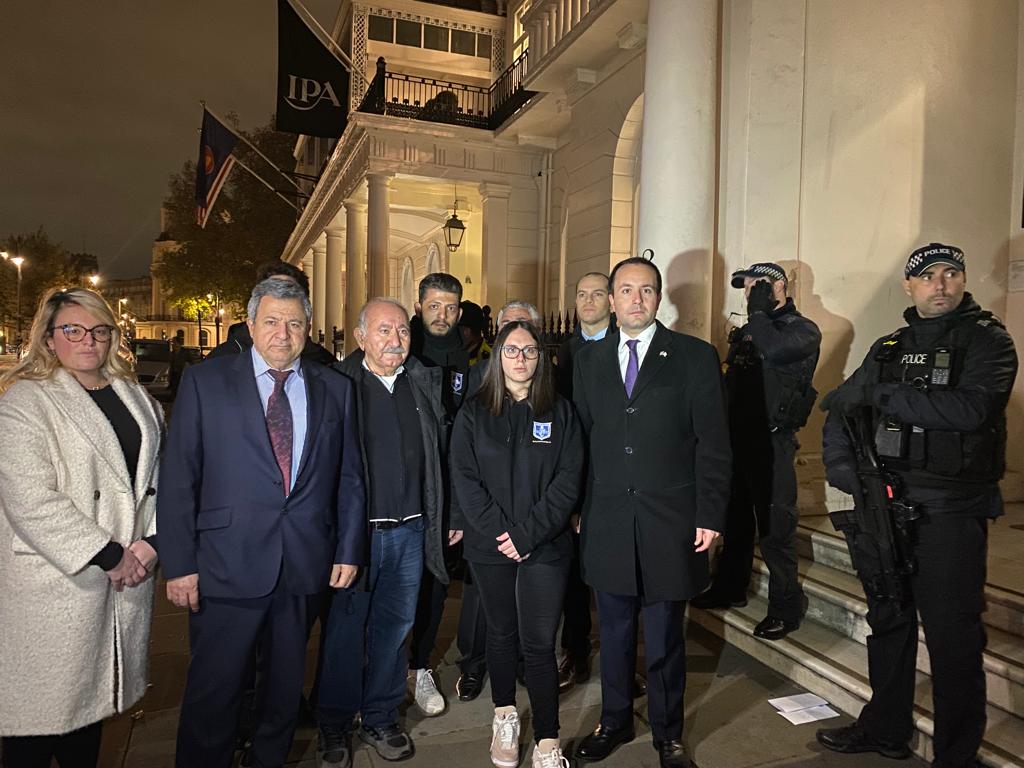 The Federation’s resolution states that, “Turkey must finally accept that Cyprus should be a normal, modern, truly independent and sovereign, European state and not a protectorate of Turkey. Peddling a ‘two state solution’ needs to cease and Turkey must accept that foreign guarantees and troops are an anachronism” The letter went on to say “we call upon you, as the Ambassador of Turkey to the United Kingdom, and a representative of your country’s Government abroad, to listen to the pleas of the Cypriot people, the international community and your host country, to allow for a reunified Cyprus as a bi-zonal, bi-communal federation, where the human rights of all Cypriots will be safeguarded”.

Read our resolution to the Turkish Ambassador

Letter to Prime Minister Boris Johnson
The Federation also sent a letter to the Prime Minister, Rt Hon Boris Johnson MP, on this dark anniversary. In the letter, Mr Karaolis recalled the UK’s longstanding position of non-recognition of the secessionist regime in the occupied areas of Cyprus, in line with international law. The letter went on to say that Turkey’s illegal actions “must be condemned in the strongest terms by the UK Government… we urge you to play a proactive and constructive role on Cyprus to ensure that future generations of Cypriots grow up in a reunified country, safe from foreign occupation and division. Partition is unacceptable to the Cypriots, and, as repeatedly stated by successive Governments, to the United Kingdom. The only solution is a reunified Cyprus, as a bi-zonal bi-communal federation, that is based on the relevant UN Security Council resolutions and High-Level Agreements.”

Read our letter to the Prime Minister