“We regret the offence that this error has caused. We have taken steps to ensure there is no repeat” – UK Government 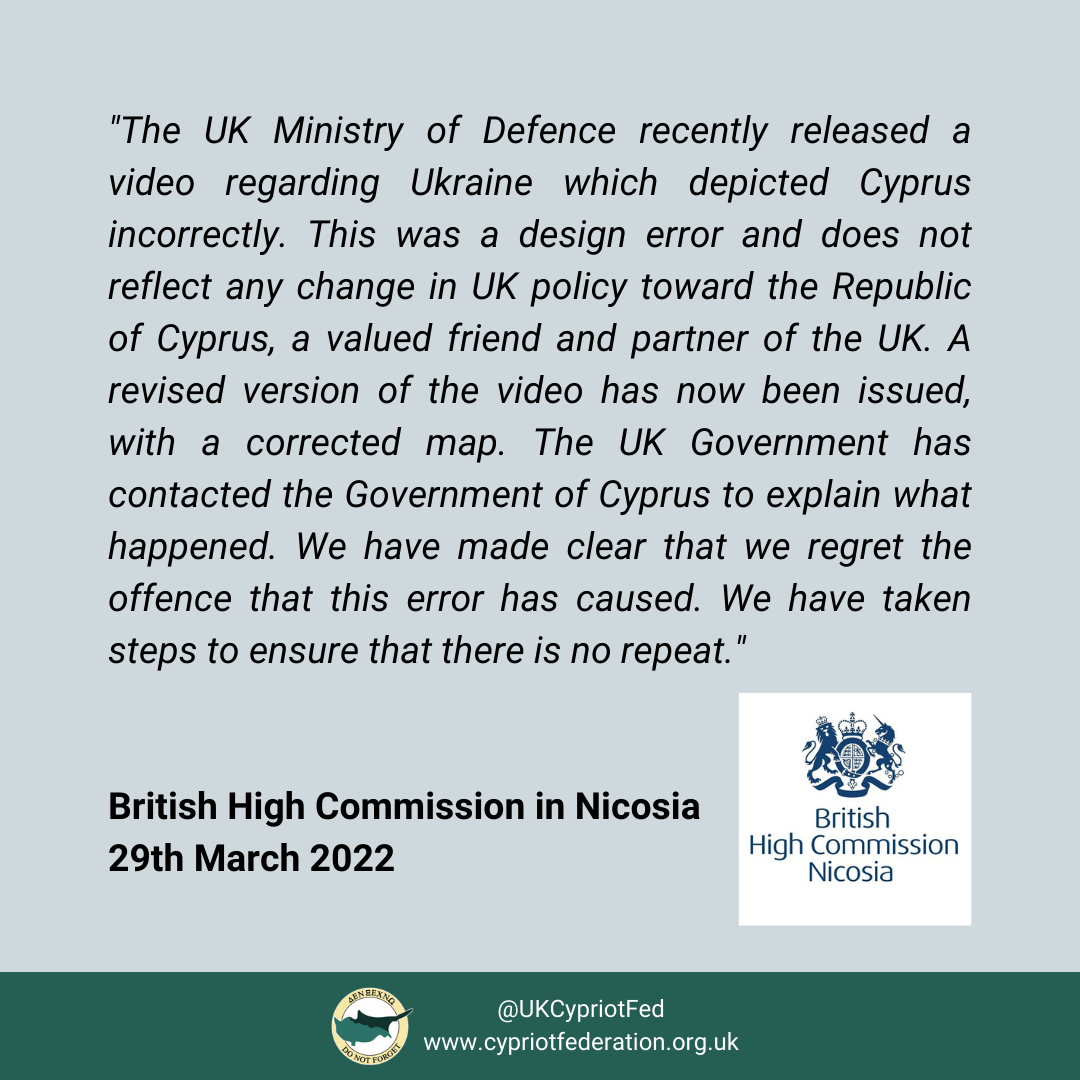 The British High Commission in Cyprus released a statement expressing regret on behalf of the British Government for the incorrect, incomplete and offensive depiction of Cyprus on a map in a recently published Ministry of Defence video. The map of the Republic of Cyprus omitted the occupied territories and the Sovereign Base Areas.

The British High Commission’s statement says: “The UK Ministry of Defence recently released a video regarding Ukraine which depicted Cyprus incorrectly. This was a design error and does not reflect any change in UK policy toward the Republic of Cyprus, a valued friend and partner of the UK. A revised version of the video has now been issued, with a corrected map. The UK Government has contacted the Government of Cyprus to explain what happened. We have made clear that we regret the offence that this error has caused. We have taken steps to ensure that there is no repeat.”

The statement comes just a day after the National Federation of Cypriots in the UK wrote to the Secretary of State for Defence, the Foreign Secretary, and the British High Commissioner in Cyprus about the issue. The Federation’s letter said that the MoD video “seemed to disregard the sovereignty and territorial integrity of the Republic of Cyprus, violating an obligation under the Treaty of Guarantee.” The letter also highlighted that the errors in the map “would be akin to portraying the borders of Ukraine as only the territory over which it has effective control, thus excluding the parts that now, sadly, fall under illegal Russian military control.” It continued, “Throughout Russia’s invasion of Ukraine, Britain has been at the forefront of the arguments about the inviolability of borders and the importance of each independent state’s territorial integrity. We entirely agree… the territorial integrity of Cyprus is indivisible and cannot be altered by foreign invasion or acts of aggression.”

The letter concluded, “We acknowledge that, at the time of writing, the video has been removed from the public domain and we are grateful that it was swiftly removed. However, we feel that an apology is due for the offence and pain that this has caused to the UK Cypriot community. We also ask for an explicit reassurance that the map of Cyprus does not represent HM Government policy and that it will not be repeated in the future.”