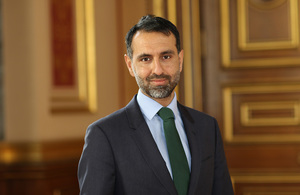 Press release from the Foreign, Commonwealth and Development Office:

Mr Irfan Siddiq OBE has been appointed British High Commissioner to the Republic of Cyprus in succession to Mr Stephen Lillie CMG who will be transferring to another Diplomatic Service appointment. Mr Siddiq will take up his appointment during August 2022.