On Wednesday 13th July 2022, the National Federation of Cypriots in the UK and the All-Party Parliamentary Group (APPG) for Cyprus held their annual parliamentary meeting to mark the tragic anniversary of Turkey’s invasion and continued occupation of Cyprus since 1974. The packed event, titled “Cyprus foreign policy in a changing world”, was the first in-person version of the meeting since 2019, after two years of hosting it virtually.

Opening the packed event, the Federation President Christos Karaolis welcomed the Ministers, MPs and the members of the UK Cypriot community in attendance. Mr Karaolis said that the last few months have been difficult for the UK Cypriot because “Russia’s illegal invasion of Ukraine earlier this year has brought back painful memories for our diaspora, especially in the run-up to July 20th, which marks 48 years since Turkey’s illegal invasion and continued occupation of the northern third of the Republic of Cyprus”. He said that Britain should hold Turkey to the same standards that it holds Russia to for its own invasion and occupation in 1974.

Mr Karaolis said that sadly Cyprus now deals with “an increasingly provocative Turkey” and that, this year alone, has repeatedly called for Cyprus to be permanently partitioned, instrumentalised the migration crisis, expanded the illegal opening of Varosi to create new fait accomplis, rejected confidence building measures, and tightened its grip on the occupied north. He reaffirmed that “despite the sadness of this anniversary, our hope for a reunified island never dwindles and we believe that a Cyprus where Cypriots live and prosper together is both attainable and viable.” 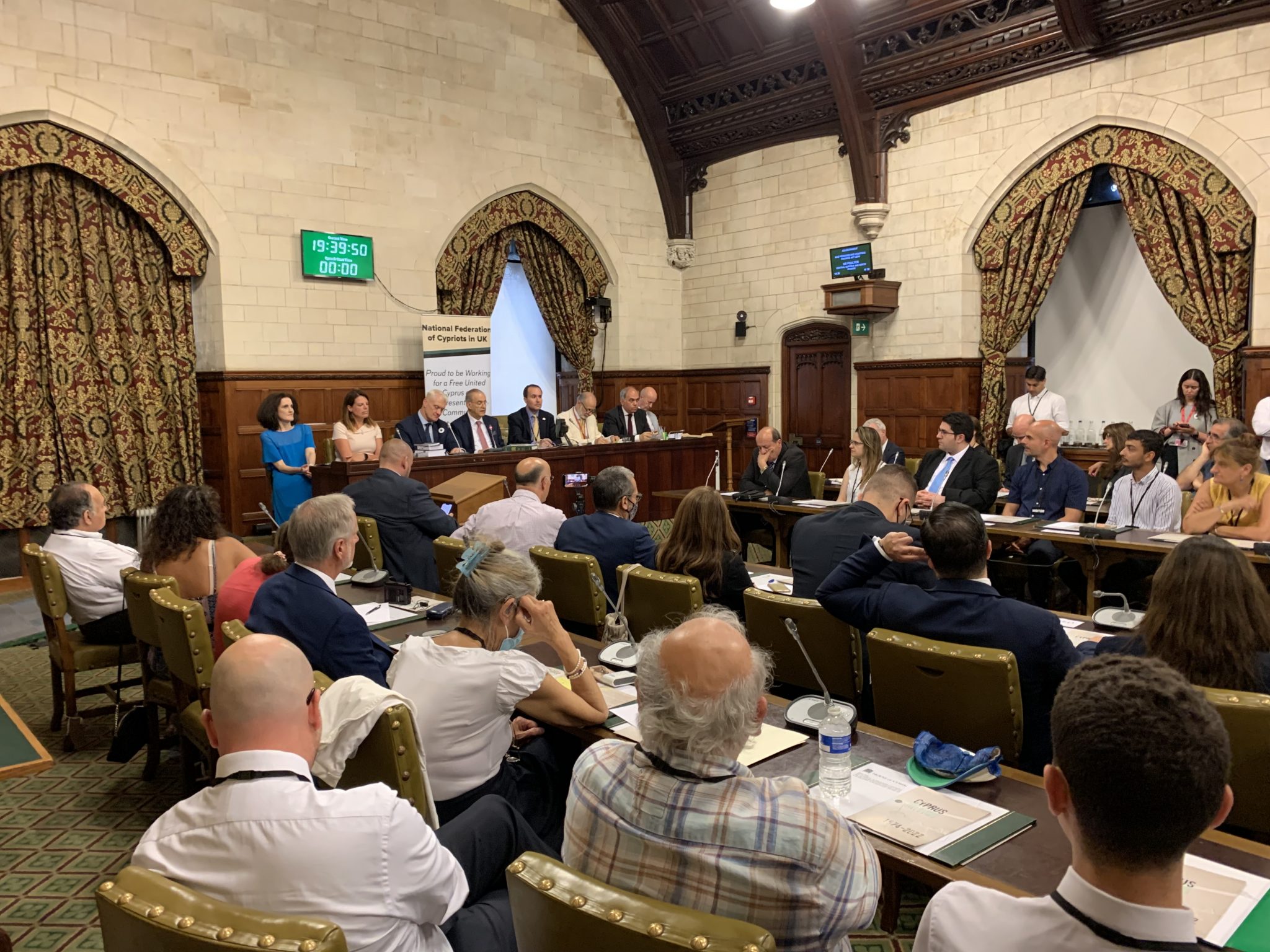 The Minister of Foreign Affairs of the Republic of Cyprus, Mr Ioannis Kasoulides, began his remarks by paying tribute to the “special relationship” between Cyprus and the UK. He said that “the bonds between our two countries date back in history, as far as the reign of Richard the Lionheart” and he also praised the two countries’ close cooperation through the Commonwealth, and through tourists and students. Foreign Minister Kasoulides added that the UK and Cyprus are “most prominently bound by our common dedication to democratic values and principles.” Mr Kasoulides also said that “Cyprus is a credible, reliable, predictable and dependable partner to our friends, in the region, on the continent, and beyond.”

Mr Kasoulides went on to highlight to the similarities between the recent illegal invasion of Ukraine by Russia and the illegal invasion of Cyprus by Turkey in 1974. He said that Cyprus’ immediate condemnation of the invasion of Ukraine was driven by the principles of “upholding the territorial integrity, unity, independence and sovereignty of states”, principles that have been violated by Turkey in Cyprus since 1974. Mr Kasoulides also noted that solidarity with the people Ukraine has been demonstrated through the “largest ever humanitarian aid package in the history of our island [Cyprus]”. In contrast, the Foreign Minister noted that Turkey has “proven to be an unreliable partner to its western allies” by ignoring sanctions and seeking “publicity stunts”.

On the Cyprus issue, the Foreign Minister reminded the MPs present that the Turkish invasion of Cyprus in 1974 had, and continues to have, dire consequences for the island. He noted that “our economy was totally destroyed” and “1/3 of our population was internally displaced… a figure that if applied to the UK would equate to 20+ million persons forcibly expelled from their homes.” Mr Kasoulides said that Government aims for a solution as soon as possible “in accordance with the relevant resolutions of the UN Security Council”. He described how Turkey and Turkish Cypriot leader Tatar unfortunately undermine the agreed framework of a bizonal, bicommunal federation.

Mr Kasoulides explained that the Cypriot Government has proposed Confidence Building Measures that would provide the Turkish Cypriot community “the opportunity to use the port of Famagusta, under EU supervision, and the airport at Tymbou under the control of the UN, following international rules and legality, in exchange for the handover of the fenced of area of Varosha to the UN, in order for the rightful owners to be allowed to return, as prescribed by UN Security Council resolutions.” He also said that the Government has already taken positive steps to help Turkish Cypriots get globally accepted vaccine passes and expanding the list of goods allowed at the crossing points. Mr Kasoulides said that the “bold” Confidence Building Measures have “regrettably been rejected” by Turkish Cypriot leader Ersin Tatar.

The newly appointed Minister for Europe, Mr Graham Stuart MP, speaking on behalf of the UK Government, said that the Government would “press on” to find a “comprehensive, just and lasting” solution to the Cyprus issue. He explained, “we believe the way to address many of the long-term issues remains through a settlement within the UN parameters. We’ve been clear that is should be based on the existing lines of a bizonal, bicommunal federation with political equality. We believe that these parameters are broad enough and flexible to accommodate the interest of both the Greek Cypriot and the Turkish Cypriot communities”. He pointed to the “major economic opportunities” that the reunification of Cyprus would bring.

Mr Stuart also made clear that “the UK will oppose strongly any destabilising actions either in Cyprus or in the wider eastern Mediterranean, and we actively support Security Council resolutions covering Varosha. We’ve called for Turkey’s actions to cease and be reversed. But it’s of course for all parties to ensure that tensions do not spiral.”

The Europe Minister also celebrated the close relations between the UK and the Republic of Cyprus with reference to the people-to-people connections, the first official visit of the Speaker of the House of Commons to Cyprus that took place earlier this year, and the visit of Their Royal Highnesses the Earl and Countess of Wessex in June as part of the Platinum Jubilee celebrations.

Fabian Hamilton MP, Shadow Minister for Peace and Disarmament, addressed the event on behalf of the Labour Party. He spoke about the important role that the UK Government can play in securing the reunification of Cyprus and urged HMG to “throw its diplomatic weight behind Cyprus” and in support of a bizonal, bicommunal federation. He said that he visited in Cyprus in May with Shadow Minister for Europe, Stephen Doughty MP and came away clear-minded that it is time that Cyprus “was put back at the centre of the international agenda.”

Sir Roger Gale MP, Chair of the APPG for Cyprus, was recovering from a minor routine operation and could not attend the event so Rt Hon Caroline Nokes MP, Vice-Chair, spoke on his behalf. Ms Nokes reassured those in attendance of the APPG’s strong commitment to Cyprus and to helping secure its reunification. She also spoke about the APPG’s visit to the island in November 2021 and the importance of such visits in giving MPs a first-hand insight into the ongoing consequences of Cyprus and the political situation. This sentiment was echoed by Mike Wood MP who was also part of the recent delegation to Cyprus.

SNP Foreign Affairs spokesperson Alyn Smith MP expressed his party’s support for the people of Cyprus in their efforts to reunify the island. He praised the valuable role that Cyprus plays as a EU member state that is a close ally.

In her remarks, Conservative MP Theresa Villiers, Vice-Chair of the APPG, said that the illegal invasion of Ukraine by Russia has many parallels with Cyprus and that she has thousands of Cypriot constituents who sadly still suffer because of Turkey’s ongoing occupation. Ms Villiers also expressed her sadness that the Turkish Cypriot leadership had rejected the recently proposed confidence building measures and the further illegal opening of Varosi. Ms Villiers said she will always passionately fight for her Cypriot constituents, as she has done for her entire political career.

Labour MP, Bambos Charalambous, also Vice-Chair of the APPG, said Turkey has been “hypocritical” in its response to the Russian invasion of Ukraine as it seeks to play the role of mediator whilst continuing to get away with violating international law in Cyprus and the wider region.

Geraint Davies MP (Swansea West), spoke about the resolution that he has tabled at the Council of Europe to help reaffirm support for the relevant UN Security Council resolutions on Cyprus and Varosi.