The 10th World Conference of the World Organisation for Young Overseas Cypriots (NEPOMAK) and the Executive Council meeting of the World Federation of Overseas Cypriots (POMAK) – International Coordinating Committee “Justice for Cyprus” (PSEKA) was held in Limassol, between 26-29 July 2022. Executive Council members from the UK were represented by the National Federation of Cypriots in the UK. This year’s meeting was also a celebration of NEPOMAK’s 20th anniversary since its formation in 2002.

If you would like to get involved in our work and attend next year, email us at: enquiries@cypriotfederation.org.uk

In his address, delivered by the Minister of Interior, Mr Nicos Nouris, President Anastasiades stressed the importance of young Cypriots’ participation in the events that preceded and follow the Conference. He went onto stress that the diaspora “are the greatest ambassadors of our culture and history, of our national positions and rights”. 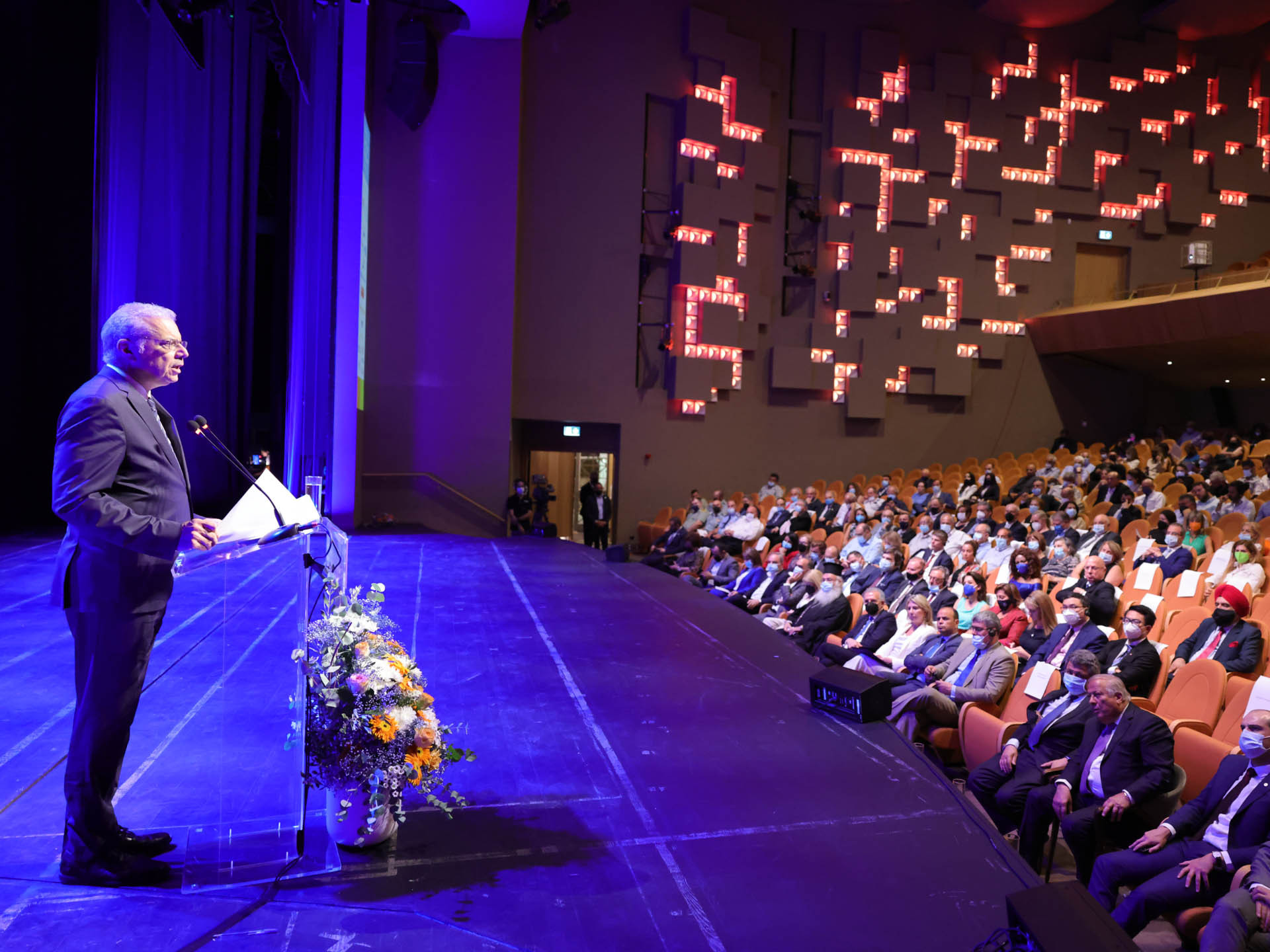 He then made reference to the Cyprus problem and the efforts to resolve it, underlining that these efforts led to the involvement of the EU under an advisory role in the negotiations, to the first submission of maps by the Turkish Cypriot side for territorial adjustments, to the achievement of significant convergences in all chapters, apart from the chapter of Security and Guarantees, to the UN recording that this chapter was of decisive importance and without sufficient progress, no positive outcome in the efforts of a solution could be expected.

He went on to say that as far as the current state of affairs is concerned, it must be seen in the light of the new geopolitical facts, as well as Turkey’s recent revisionism. Despite, this, he said “we continue to take initiatives that prove our constructive position for the immediate resumption of dialogue through the submission of bold Confidence Building Measures and the acceptance of the appointment of an envoy or senior staff of the Secretariat to provide mobility to the processes.” In closing he said “there is only one option for us: To achieve a bizonal, bicommunal federation with political equality, as defined in the relevant UN Security Council resolutions, leading to a functioning and sustainable state. A solution that will ensure the territorial integrity and full sovereignty of our homeland, will fully respect international law and the European acquis, and which will mainly free our country from occupation armies and anachronistic guarantees of subordination.”

The Opening ceremony was also addressed by the Presidential Commissioner for Humanitarian Affairs and Overseas Cypriots Mr Photis Photiou, the President of the House of Representatives Ms Annita Demetriou, Archbishop Chrysostomos II and the Deputy Minister of Education and Religious Affairs of the Hellenic Republic, Ms Zetta M. Makri, as well as the Presidents of POMAK (Andreas Papaevripides), PSEKA (Philip Christopher) and NEPOMAK (Christos Tuton). Also in attendance was the State Secretary in the Ministry of Foreign Affairs of the Republic of Serbia Nemanja Starovic, High Commissioner of Diaspora Affairs of Armenia Zareh Sinanyan and Deputy Minister of Foreign Affairs of Romania, responsible for Diaspora issues, Georghe-Florin Cârciu.

Welcoming delegates, Commissioner Photiou expressed deep gratitude for the multifaceted contribution of the Cypriots of the Diaspora at a political, social and cultural level. He made a special reference to diaspora youth, saying “The issues that concern our youth are of particular importance to us; both by providing programs to encourage their involvement in the community events and in the political events of their countries of residence, as well as by providing programs of their most frequent contact and acquaintance with Cyprus, emphasizing learning our language, our history and culture.”

In his remarks, the President of NEPOMAK Christos Tuton, highlighted the achievements of NEPOMAK over the last 20 years, and the organisation’s success in developing a stronger sense of community amongst young, diaspora Cypriots. In their remarks, the Presidents of POMAK (Andreas Papaevripides) and PSEKA (Philip Christopher) reiterated the diaspora’s commitment to supporting efforts to end the occupation and reunite Cyprus.

In his briefing, Foreign Minister Ioannis Kasoulides gave an extensive overview of Cyprus’ foreign policy priorities, saying we are “at a critical cross roads as regards the Cyprus problem”. He outlined initiatives undertaken to create a positive climate and improve the everyday lives of Turkish Cypriots (e.g. issuance of COVID vaccination passports), as well as proposed Confidence Building Measures, however expressed his disappointment at the recent Economic and Financial Protocol that strengthens Turkey’s control in the occupied north. He also went on to outline Cyprus’ full support for EU actions against Russia’s illegal invasion of Ukraine. In a private briefing the Greek Cypriot Chief Negotiator, Menelaos Menelaou, provided a detailed update about the efforts to restart negotiations. 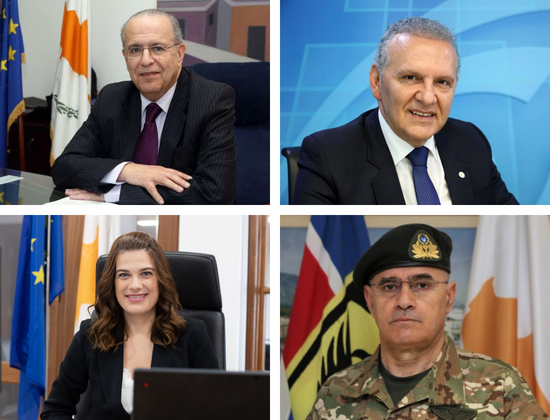 Energy Minister Natasa Pilides briefed the delegates on the developments in Cyprus’ energy exploration, as well as other energy projects including EurAsia Interconnector. The Minister said that such projects will ensure that Cyprus plays a vital role in Europe’s future energy security. The Minister also discussed the implications of recent announcements by Turkey to launch illegal drilling on 9th August.

Commissioner Photiou commended the diaspora, and especially NEPOMAK, for their vigorous commitment to the Cyprus issue and specifically the issue of the missing, enclaved persons and cultural desecration in the occupied northern part of the island. Commissioner Photiou also discussed the national diaspora strategy with delegates, as well as a new Online Platform for Diaspora Cypriots, that is tool aimed at eliminating distances and enabling direct communication and meaningful cooperation with them.

Mr Photiou was also joined by Leonidas Pantelides from the Committee on Missing Persons and Nicos Sergides from the Pan-Cyprian Organisation of Relatives of Missing Persons, who delivered a moving briefing on the issue of the missing. They shared evidence on the intentional relocation of the remains and the lack of access to military zones in the occupied areas. So far 735 Greek Cypriots and 292 Turkish Cypriots have been identified while the fate of 975 people declared as missing remains unknown.

In a private briefing, the Chief of the Cypriot National Guard, Lieutenant General Dimokritos Zervakis, shared they key pillars of Cyprus’ defence strategy and had an open discussion with delegates.

Delegates also met with the Permanent Secretaries of the Ministry of Foreign Affairs and Ministry of Interior as well as the Leaders/Representatives of Cypriot political parties, to discuss matters concerning diaspora Cypriots, including issuance of Cypriot Nationality and other documents. 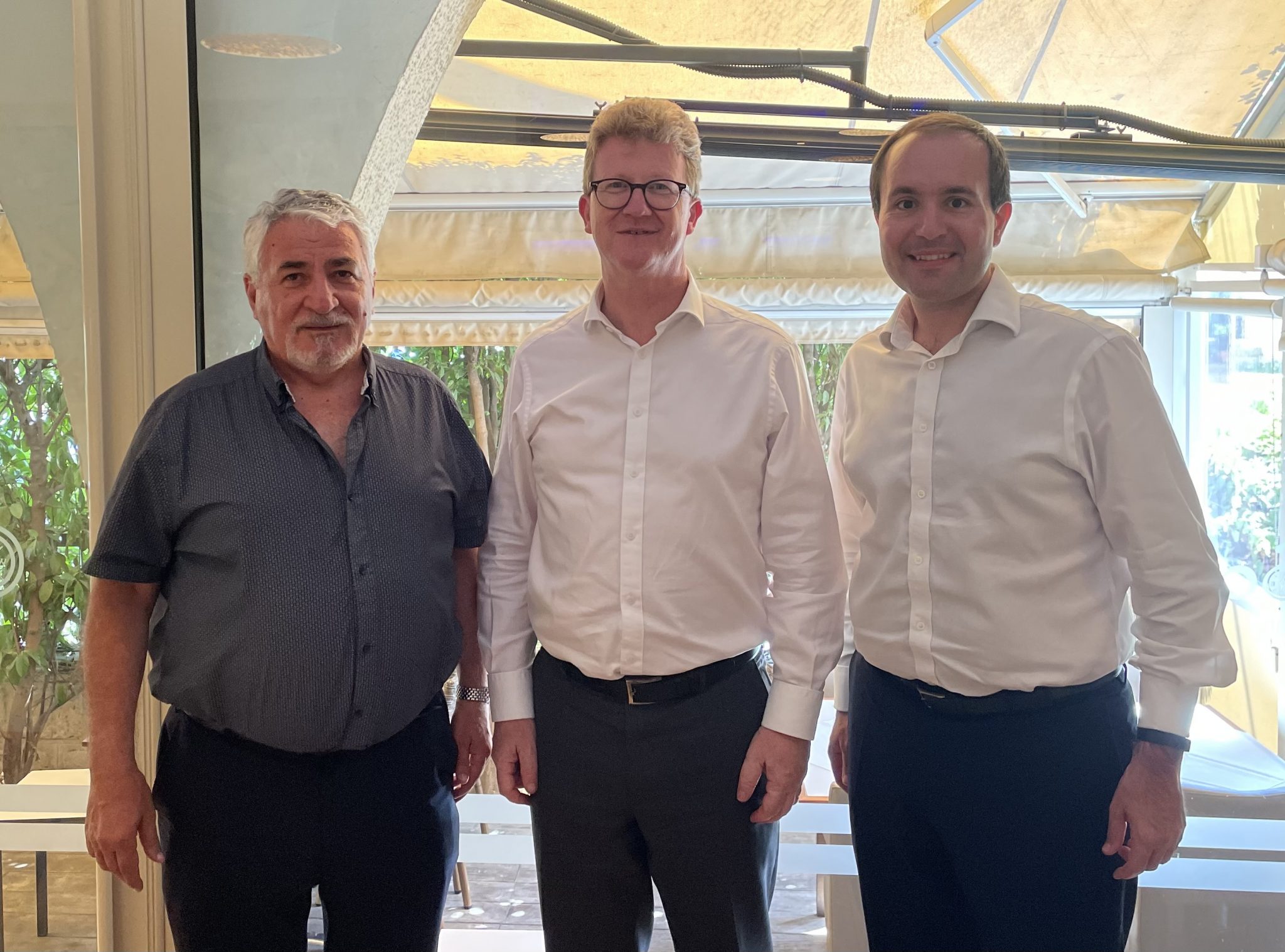 The Federation’s President, Christos Karaolis, and Vice-President, Bambos Charalambous hosted a warm & friendly farewell lunch with the outgoing British High Commissioner to Cyprus, Mr Stephen Lillie. The lunch was an opportunity to discuss the latest developments of the Cyprus issue, including efforts to restart negotiations, the growing UK-Cyprus ties and to wish Mr Lillie all the very best for his next posting.

The Executive Councils of POMAK, PSEKA and NEPOMAK had a private meeting with President Anastasiades, at the Presidential Palace, where they received an extensive, confidential briefing on the current developments on the Cyprus issue. 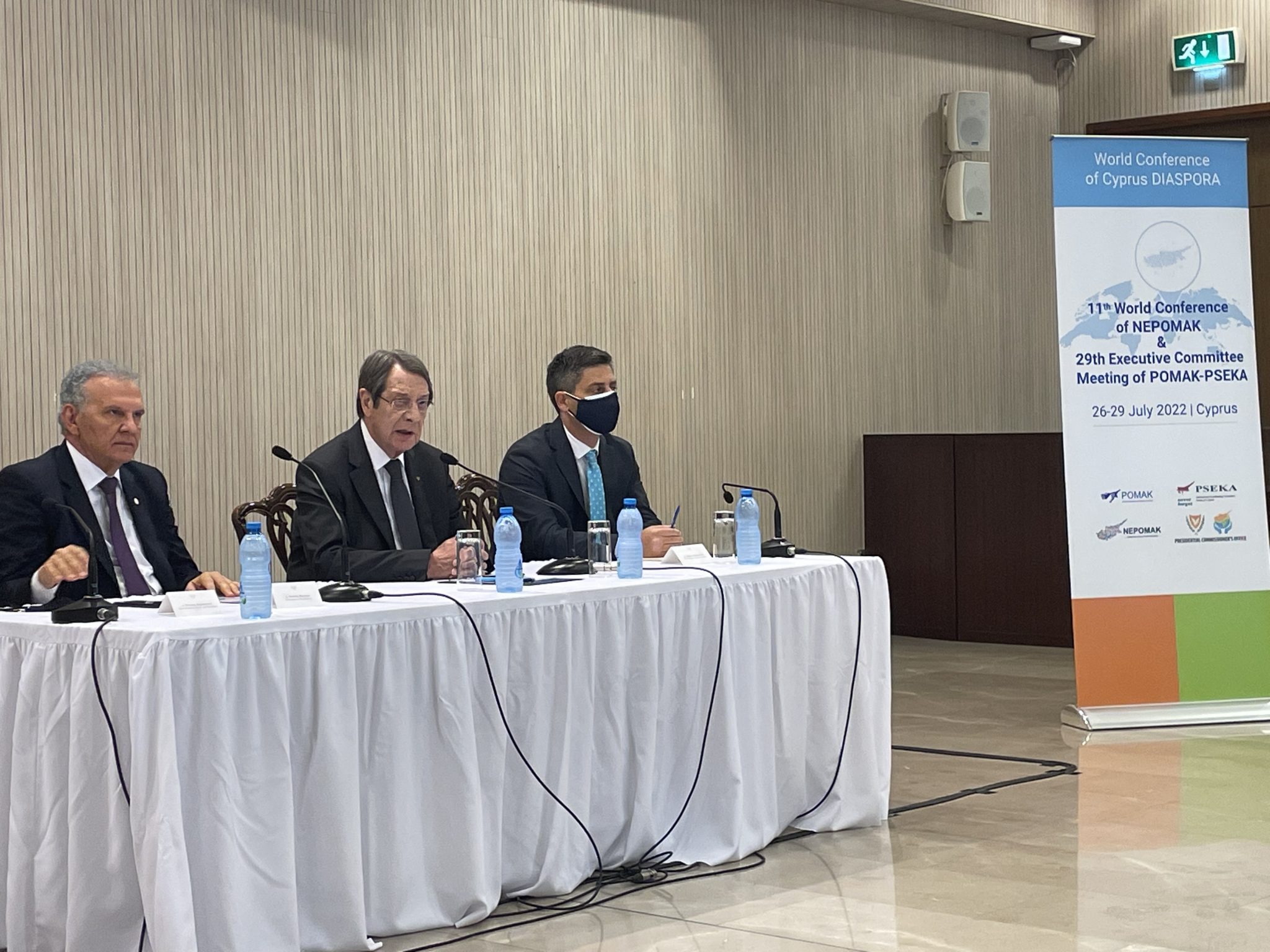 Following the meeting, the President and First Lady, Andrie Anastasides, hosted a reception for conference delegates in the gardens of the Presidential Palace. At the reception, President Anastasiades presented the Medal for Exceptional Contribution to 11 exceptional diaspora Cypriots whose life’s work has been a continuous active contribution to Cyprus abroad. They were awarded the honour as a result of their lengthy and dedicated service to their homeland, Cyprus. 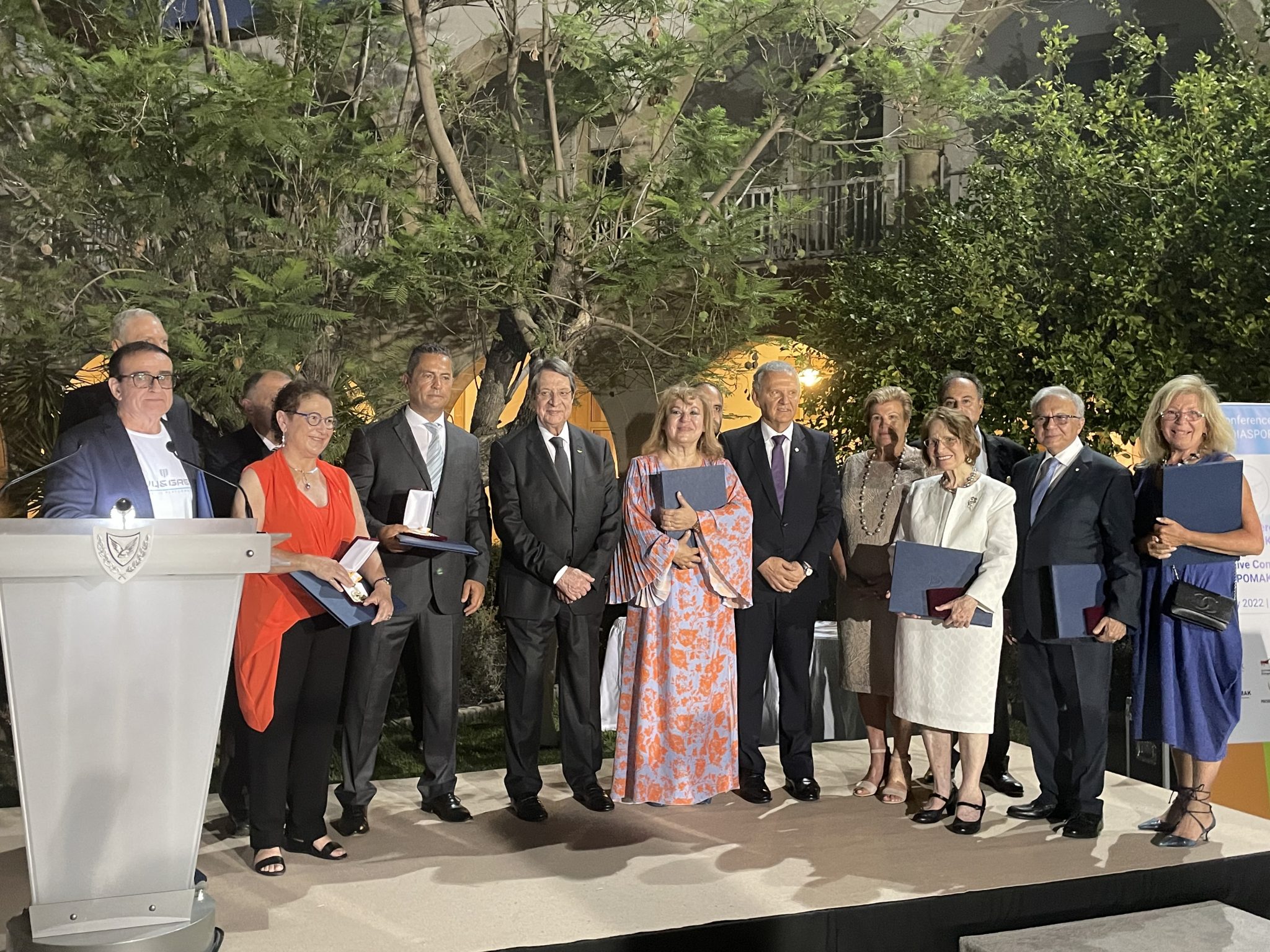 At the same time, NEPOMAK (the World Organisation for Young Overseas Cypriots) held their 10th World Conference and also celebrated the organisation’s 20th anniversary. The NEPOMAK World Conference brought over 80 NEPOMAK members from across the world together to hear briefings on key issues and discuss the future of the diaspora. It was the first global gathering of young, diaspora Cypriots since 2019, following the COVID pandemic, and NDCP and NCCT also returned. The Conference generated huge enthusiasm for NEPOMAK’s work and programmes that the organisation will carry forward and build on.

Throughout the Conference, Cypriot Government officials, and the leadership of POMAK and PSEKA praised NEPOMAK’s contribution to the Cypriot diaspora movement and joined celebrations to mark the organisation’s 20th anniversary. There was a special session of the Conference to mark the occasion as well as a dinner with live music. 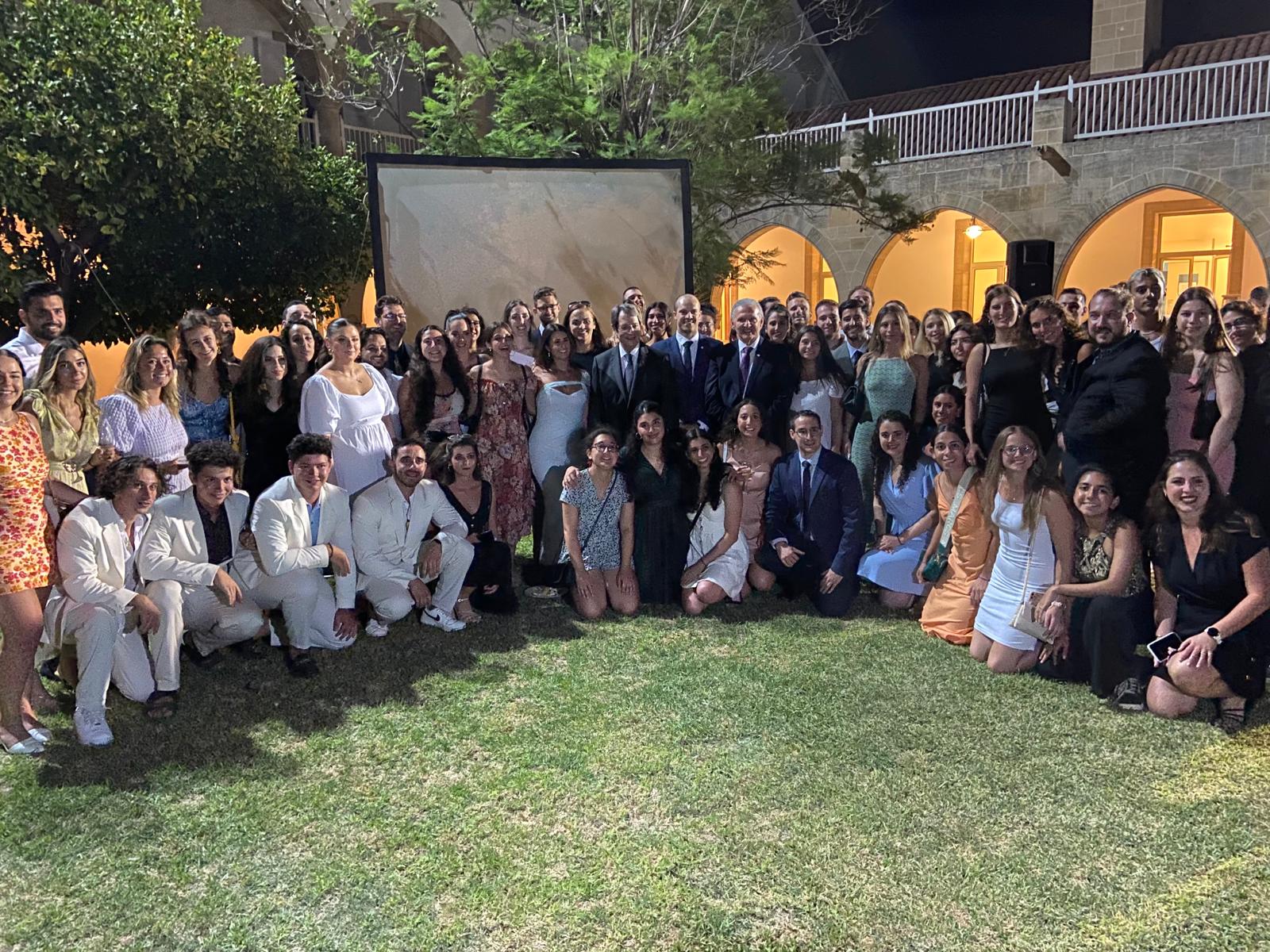