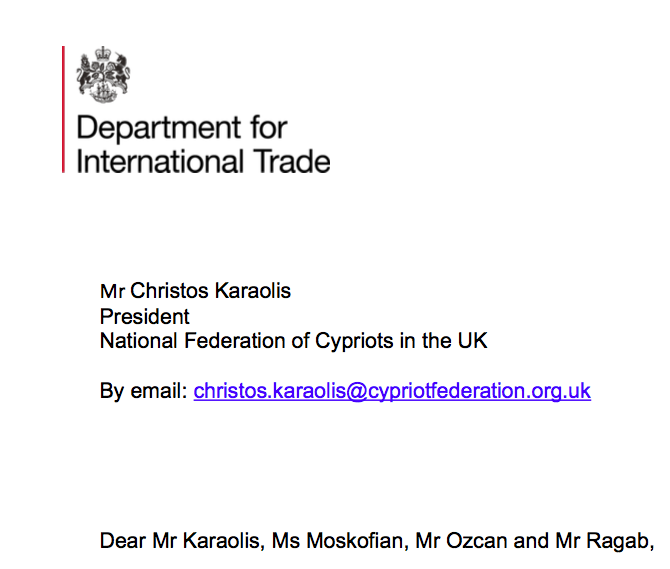 We recently sent a joint letter to the British Government about the upcoming UK-Turkey trade deal negotiations. We asked the Government to use the trade talks to hold Turkey to account for its international law and human rights violations, that have noticeably worsened in recent months and years. Our joint letter was signed by the Armenian National Committee UK, the Kurdish People’s Democratic Assembly of Britain and the Egyptian Council in UK.

The signatories noted that whilst trade talks have been quietly progressing, Turkey is becoming an increasingly “destructive force” in the region, systematically violating international law.

Responding on behalf of the British government, Ranil Jayawardena MP, Minister for International Trade, said that the Government “places a great deal of importance on our trading relationship with Turkey. Bilateral trade was worth over £18.6 billion in the year up to April 2020 and, as you note, Anglo-Turkish trade talks are underway to protect that trading relationship. Our priority this year is to seek to replicate the effects of existing EU trading arrangements with Turkey, as far as possible, into a bilateral arrangement between the United Kingdom and Turkey by the end of the Transition Period. It is important that we provide certainty for business, support both of our economies and protect jobs.”

The Minister did, however, reassure that “In equal step, the United Kingdom has a strong history of promoting our values globally and we are clear that trade does not have to come at the expense of our record in upholding rights and responsibilities. This will remain a core part of our foreign policy.”

He said, “we take our export responsibilities seriously” and also confirmed that the UK Government “will not grant an export licence if to do so would be inconsistent with the Consolidated Criteria, including respect for rights and international humanitarian law. As with all countries, we keep our approach to Turkey under continual review”

The Minister went on to say that the UK understands the importance of hydrocarbon exploration for Turkey, Greece and Cyprus and assures that the Government has urged Turkey and Greece to prioritise opportunities for dialogue and seek de-escalation. He also said that “The Minister for the European Neighbourhood and the Americas recently spoke to her Turkish, Greek and Cypriot counterparts on this matter, and the Defence Secretary has discussed tensions with the Turkish, Greek, French and German Defence Ministers in recent weeks also. British Ministerial engagement in support of a negotiated solution is continuing.

Mr Jayaguardena added that the UK had made clear its opposition to Turkish military intervention in north-eastern Syria last October, and welcomed Turkey’s continued ceasefire and diplomatic efforts to maintain the ceasefire in Idlib.