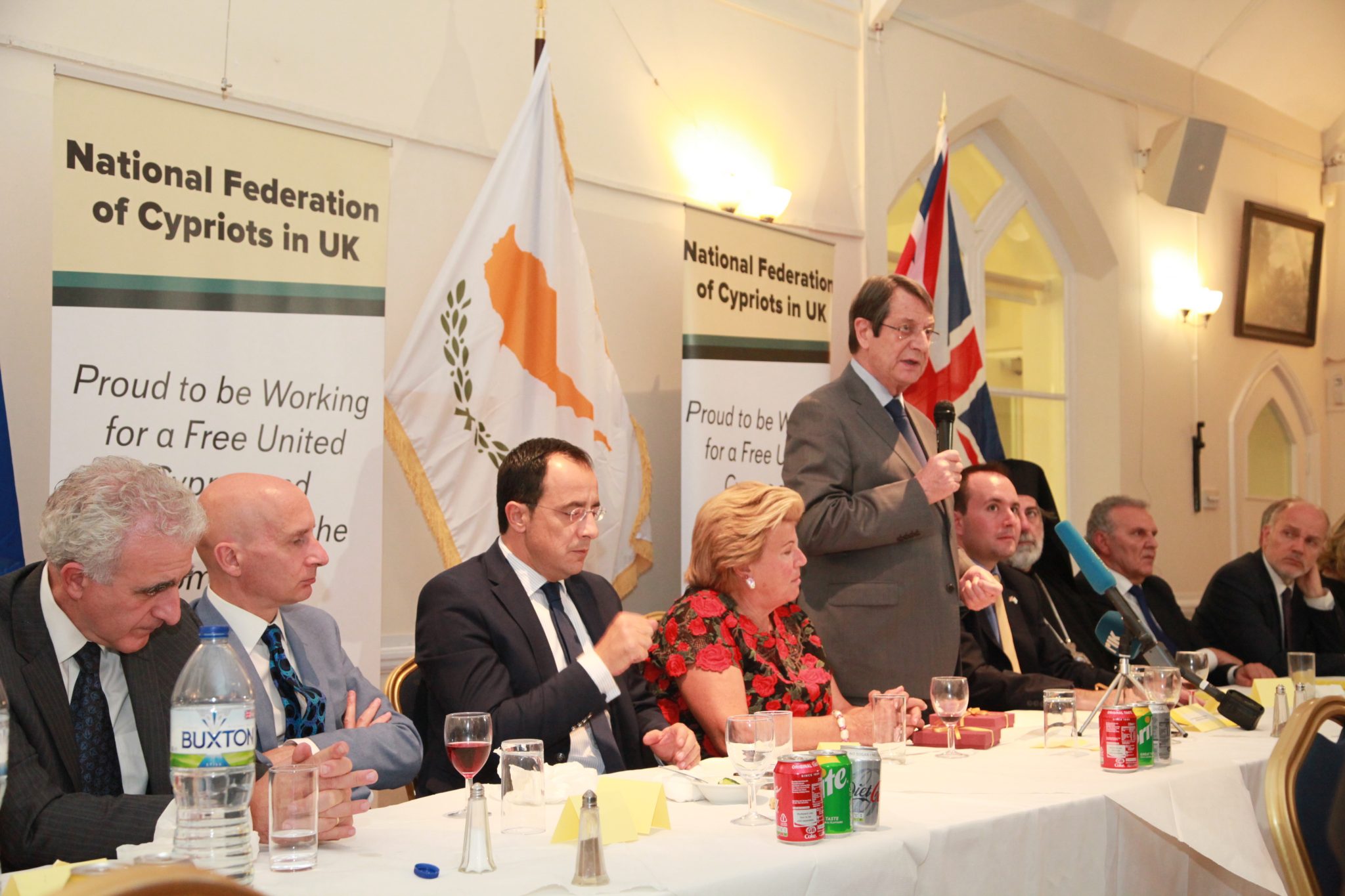 On Saturday 21 September, the National Federation of Cypriots in the UK hosted H.E. the President of the Republic of Cyprus, Mr Nicos Anastasiades, for a working dinner in London before he headed to the United Nations in New York. Representatives from the Federation’s member associations, including from Birmingham, Manchester and Cardiff, as well as distinguished guests from British politics, business and industry were in attendance.

President Anastasiades expressed his desire for the resumption of talks with the aim of reunifying the island with a functional and just solution. He said that he is going to the UN General Assembly this week with every intention to return to Cyprus “full of hope for negotiations”. President Anastasiades has been making efforts to resume negotiations from where they left off in Crans Montana in 2017. He said that the work towards agreeing a Terms of Reference with the Turkish Cypriot leader Mr Mustafa Akinci had been “positive” and that the UN Special Envoy was “encouraged” by their efforts. The President said that during initial meetings with the Turkish Cypriot leader, it was discussed that the Terms of Reference were to consist of the Joint Declaration of February 2014, the convergences agreed in the run up to Crans Montana 2017 and Gueterres framework of 30 June 2017. However, the optimism was dashed after Mr Akinci went away to consult and clarify his position on the proposed Terms of Reference.

The President said that Mr Akinci then returned with proposals for the Terms of Reference that were “unnaceptable” and outside of the framework of the negotiations, for example, combining political equality with effective participation. These included a rotating presidency and a positive vote on all decisions of the Government and all its institutions. President Anastasiades said, “we recognise and support political equality… but what is being proposed is instead political inequality. Namely, a veto that means that one community could determine the fate of another community.” He added, “I have repeatedly challenged the proposers of this idea to find one country out of the 193 UN Member States that has a similar system of governance.” The President went on to say that other unacceptable demands that were proposed included the possibility of submitting new ideas about a Cyprus settlement irrespective of the final outcome of the efforts to reunite Cyprus.

This, he added, resulted in the failure of the UN Envoy to secure an agreement over the Terms of Reference that would pave the way for the resumption of the UN talks.

Referring to Turkey’s recent aggressive actions against Cyprus including illegal drilling in Cyprus’ Exclusive Economic Zone (EEZ), the President warned that “as determined as I am to enter a sincere and creative dialogue, I am equally determined not to engage in talks while Turkey continues its illegal actions, violating international law or threatening to settle Famagusta”. He added that the communities of Cyprus could not build the necessary trust and confidence in each other “under such provocations, such violations of the international law”. The President noted, “I am glad to state that this is the unanimous position of all political forces [in Cyprus]. One cannot negotiate under gunboat threats, under the threat of new fait accompli.” 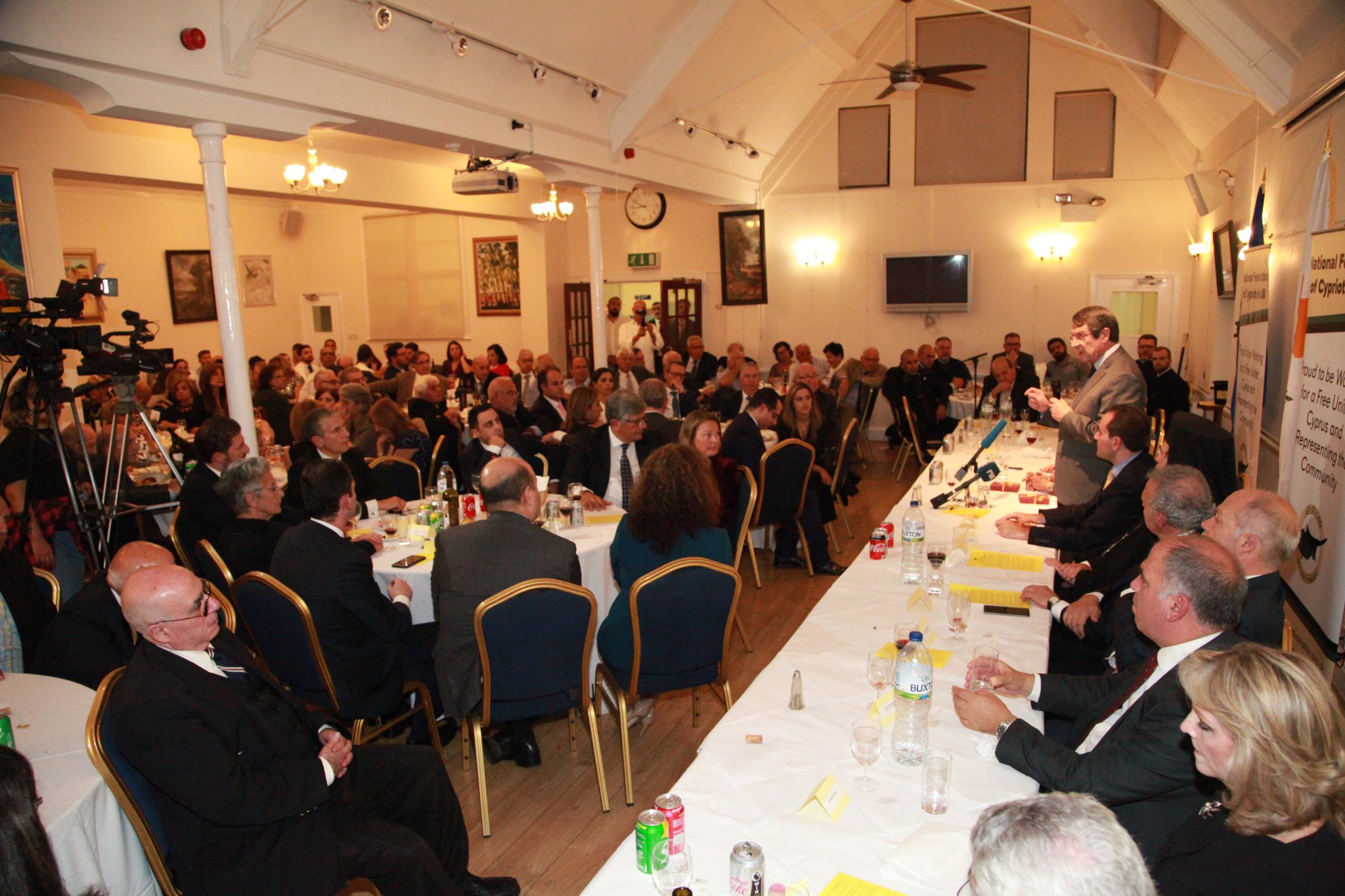 The President concluded by expressing his appreciation for the Federation’s work and said that, “the new mechanisms and strategy that have been put in place, the new efforts being made, and especially the involvement of young people, gives us hope that we can work in a coordinated, methodical way, with significant successes. We are already seeing the results of this new strategy, judging by your work and achievements.”

The new Archbishop of Thyateira and Great Britain, Nikitas, addressed the dinner briefly and commented that the Church holds dear the principles of human rights, truth, justice and freedom. He added that, “one does not need to be Cypriot to appreciate the importance of these rights for Cyprus.”

The President of the National Federation of Cypriots in the UK, Mr Christos Karaolis, welcomed the President of Cyprus to the UK and reaffirmed the UK Cypriot diaspora’s support for the President’s efforts to reunify Cyprus and the united approach to campaigning for a free, united Cyprus and the end of Turkey’s occupation. Mr Karaolis said that the Federation, “unites the community and its leaders, of all political parties and no political party, by identifying the common ground and coordinating efforts.” He also expressed gratitude on behalf of the UK Cypriot community for the close coordination and support between the Federation and the Government of Cyprus.

Mr Karaolis went on to share the successes of the Federation’s 2019 Hands Off Cyprus campaign which saw UK Cypriots sending pre-prepared emails to their local Members of Parliament (MPs). The campaign resulted in over 58% of MPs being contacted by their own constituents about the ongoing illegal occupation of Cyprus and the need for the outdated system of guarantees and troops to be abolished as part of any solution. Furthermore, he said that, “the Federation led the community’s reaction to Turkey’s illegal invasion of Cyprus’ EEZ with warships and drilling ships.” Mr Karaolis also added that the community’s vocal opposition played a role in the UK Government’s public opposition to Turkey’s drilling plans, outlined in a letter from the Europe Minister to the Federation’s President on 3rd June.

He highlighted the significant contribution that the UK Cypriot community makes in the UK and he noted that “earlier this year we established an Economic Diplomacy roundtable, under the Chairmanship of the Foreign Minister”. He welcomed several members of the Economic Diplomacy roundtable to the dinner and noted that they included “captains of business, banking and enterprise, leaders in UK Civil society and former Secretaries of State.” 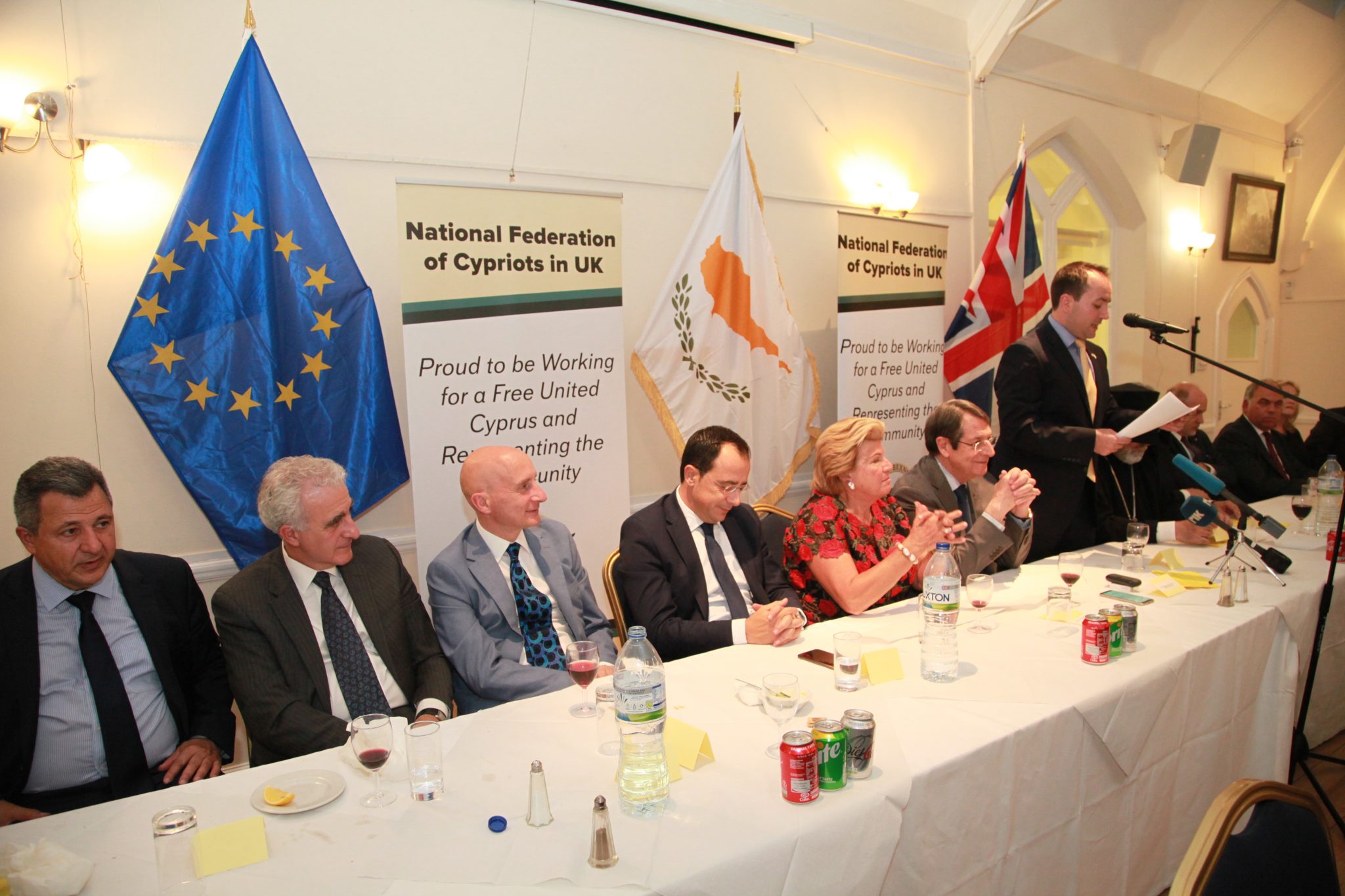