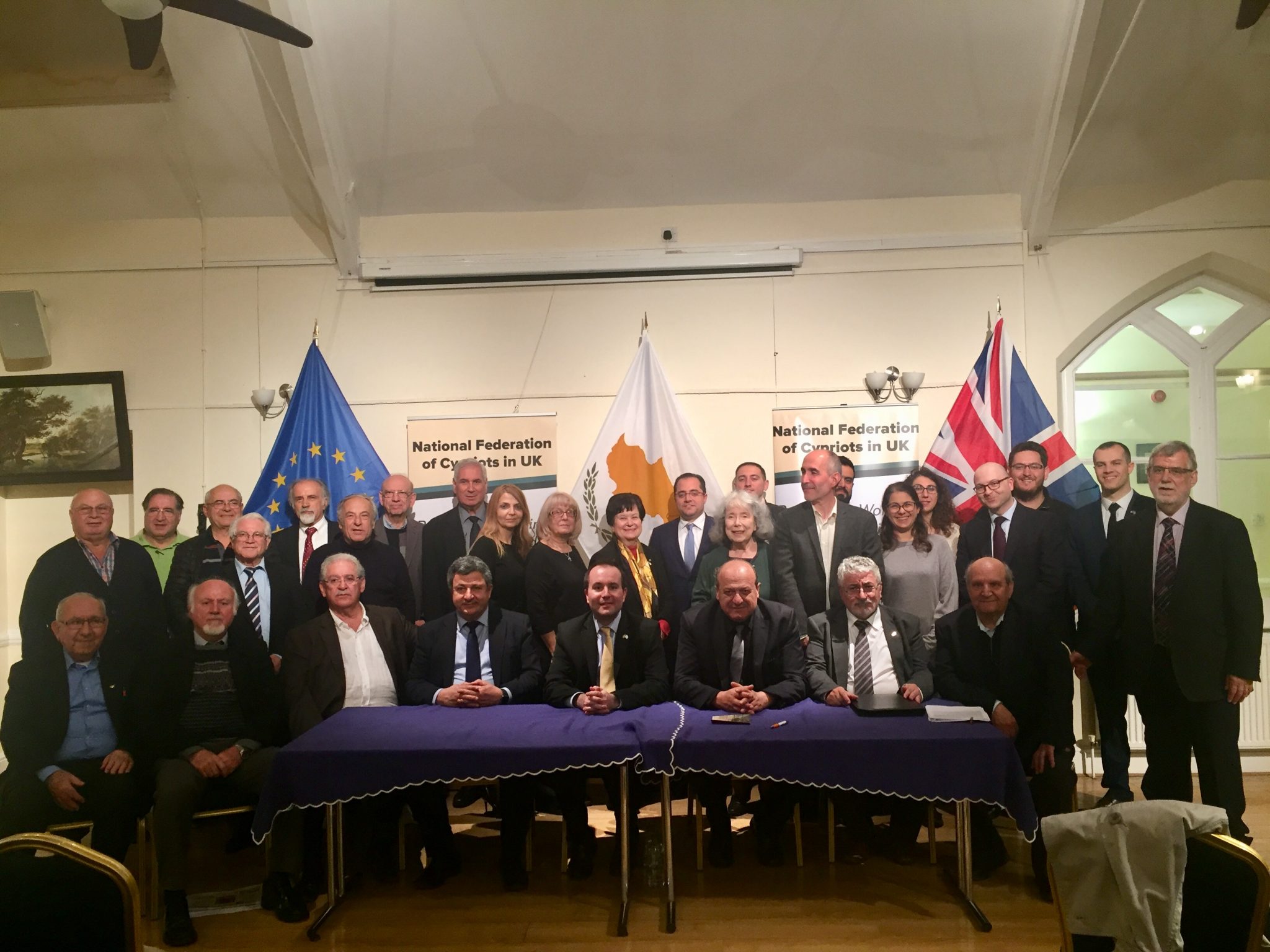 Last night (9 May 2019) the National Federation of Cypriots in the UK held its Annual General Meeting (AGM) and biennial elections for its Secretariat and Officers.

Christos Karaolis, the first third-generation Cypriot to hold the position, was re-elected as President. He will now enter his third term as President of the organisation. Reflecting on the achievements of the Federation during the past two years (2017-19), Mr Karaolis said that “we’ve continued our work in raising the profile of the Cyprus issue and putting Cyprus, and our community, on the map in parliament through a new form of online campaigning to amplify our diaspora’s voices.” He highlighted the ‘Hands Off Cyprus’ campaign, that saw 41% of MPs contacted and led to Conservative MPs, the Labour Party, Lib Dems and the Green Party issuing statements calling for the abolition of guarantees & removal of foreign troops from Cyprus.

Mr Karaolis also paid a warm tribute to the retiring High Commissioner for Cyprus to the UK, Euripides Evriviades, for his tireless and outstanding work for Cyprus and for the UK Cypriot community. He also thanked the Consul General, Theodoros Gotsis, and the entire team at the High Commission for their strong support. Mr Gotsis was present at the Annual General Meeting, and has been a close friend of the Federation since his arrival in the UK last summer. The President also thanked Archbishop Gregorios, the Greek Ambassador, the President of Cyprus, the Foreign Minister of Cyprus, the Cypriot Government Spokesperson, Presidential Commissioner of Cyprus, as well as local media including Parikiaki and Eleftheria newspapers, Hellenic TV, the Cyprus News Agency, RIK and London Greek Radio. Mr Karaolis also expressed gratitude to the Federation’s executive team (Andreas Karaolis, Christos Tuton and Adrian Patsalos) for their “drive, determination and effort towards modernising the organisation and improving our results.”

Mr Karaolis spoke of the importance of securing further allies in Parliament and driving policy change on the Cyprus issue in the UK. Secondly, he said that, “with the growing proportion of second- and third- generation Cypriots in the UK, we must continue adding new strategic dimensions to our work as a Federation that will both complement our work on the Cyprus issue, as well as bring the diaspora closer to us.” 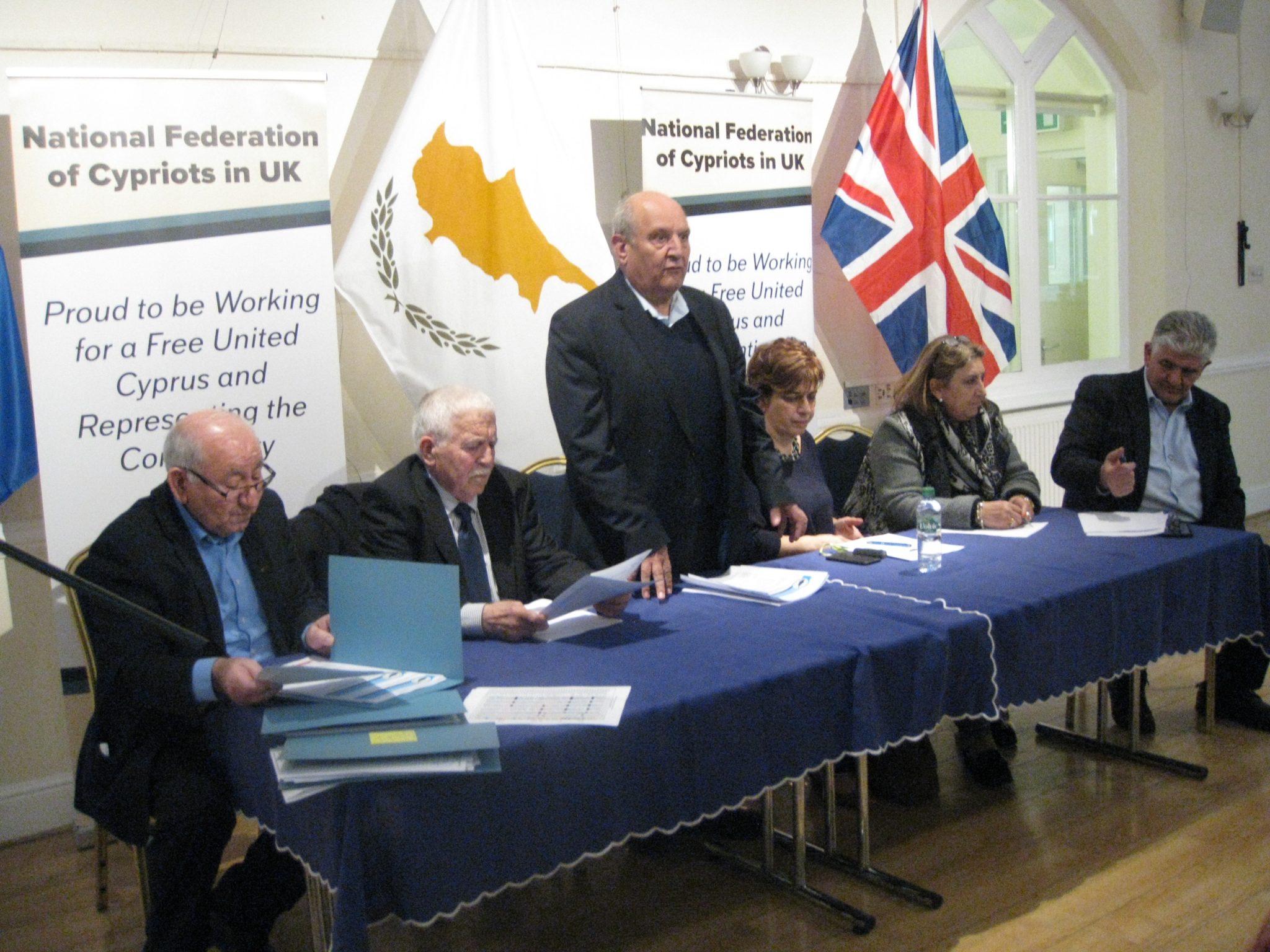 After the conclusion of the President’s report, the AGM elected an election committee to oversee the meeting and ensure the smooth running of the voting. Christodoulos Stylianou, Honorary Vice-President of the Federation, was elected as Chair of the committee and the rest of the committee consisted of Aliki Koumettou, George Michael, Maria Paschali and George Yiakoumi.

As the votes were being counted, the Executive Secretary of the Federation, Andreas Karaolis, announced that the annual parliamentary reception for Cyprus in the House of Commons would be taking place on the evening of Tuesday 16 July. He said that the Foreign Minister of the Republic of Cyprus, Nikos Christodoulides, would be present and he urged everyone to attend and ask their local MP to attend as well.

Furthermore, the President of POMAK, Andreas Papaevripides, informed the AGM that he would be participating in the annual PSKEA Conference in Washington DC, along with the President of NEPOMAK, Christos Tuton. The PSEKA Conference will take place between 4-6 June and will feature discussions with Congressmen and Senators about the Cyprus issue and the energy developments in the Eastern Mediterranean. Mr Papaevripides also spoke about the upcoming 2019 POMAK World Conference taking place in Nicosia from 27-30 August and the representatives present at the AGM exchanged views on topics that they’d like to see discussed at the POMAK Conference.

Following these updates, the AGM discussed various ways to improve the work of the Federation. They spoke about the importance increasing the engagement of Cypriot communities around the UK and welcomed the presence of George Yiakoumi and Kyriakos Akathiotis who had travelled Birmingham to attend the meeting. They also resolved to strongly condemn the recent illegal incursions by Turkey into Cyprus’ EEZ with the intent of drilling for hydrocarbons. They said that the UK Cypriot community must make their voice heard on this issue and welcomed the new online email campaign (www.cypriotfederation.org.uk/mp) that calls on MPs to tell Turkey to take its hands off Cyprus.

In addition, the AGM were unanimous in their praise for the High Commissioner for Cyprus to the UK and agreed that he had improved Cyprus’ standing in the world and greatly increased awareness about the Cyprus issue during his tenure as High Commissioner.

Once vote counting had concluded, the results were announced by Christos Tuton on behalf of the election committee. A quarter of the Federation’s Secretariat are under the age of 38 and will continue to bring new ideas and fresh approaches to the organisation’s work. The Federation’s member associations welcomed this as a very positive sign that young, British-born Cypriots are actively engaged with the UK Cypriot diaspora, as well as the Cyprus issue.

Once the Secretariat was elected, representatives of the Federation’s member associations elected the Officers of the organisation. The full list of names and their positions can be found below.

The following were elected as Officers of the Federation: