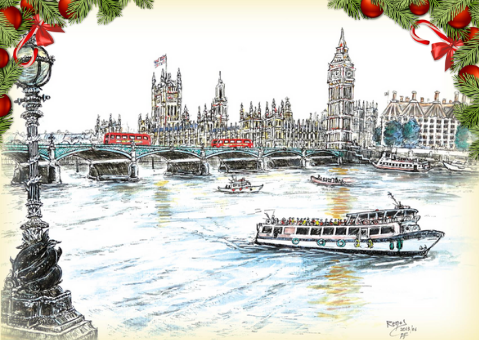 As we enjoy the festivities of this time of the year, I’d like to wish you and your loved ones a Merry Christmas and a Happy New Year. The UK Cypriot community will be celebrating across the country and I would like to send our very best wishes as you do so. I’m delighted to have had the opportunity to meet so many members of our community in 2019 through visits across London, Manchester, Birmingham and Margate.

As we look ahead to Christmas and the new year, I believe that we should all make an effort to reflect on the previous year. As we reflect, we should both celebrate but also crucially, learn lessons, as we think towards the future.

As your Federation, we’ve continued to represent and advance our community’s interests and views at the very highest levels. We’ve discussed issues of importance to our community with Government Ministers, Shadow Ministers, as well as representatives of other political parties and Members of Parliament. We have hosted Cypriot Government Officials, including H.E. The President of the Republic of Cyprus, Nikos Anastasiades, to whom we expressed our full support for his ongoing efforts to reunite Cyprus and welcomed the new High Commissioner of Cyprus to the UK, His Excellency Andreas Kakouris. We also met with the UK High Commissioner to Cyprus, Mr Stephen Lillie, and the new Archbishop of Thyateira & Great Britain, His Eminence Archbishop Nikitas.

The people spoke clearly in last week’s general election and I would like to take this opportunity to congratulate Prime Minister Johnson on being returned with a majority Government. As Prime Minister Johnson forms his new Government and the Opposition elects its new leadership, we will of course redouble our advocacy efforts, on your behalf. Last week’s election also saw many of our Parliamentary supporters, across the political spectrum, re-elected. On behalf of our community I would like to offer them our sincere thanks and congratulations. 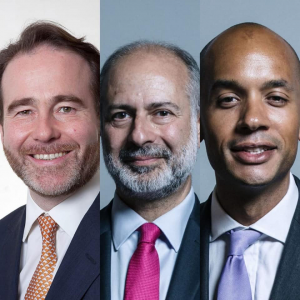 Indeed, as a sign of the importance being attached to our community, this election saw video messages recorded by the Cyprus Spokespersons for the Conservative Party, Labour Party and Liberal Democrats, for the first time. Finally, I also want to thank each and every one of you for actively participating in this election – whether it was supporting your preferred candidate, or simply voting. Our active participation in the democratic institutions of the UK is crucial if our voice is to be heard.

Our community’s voice has been heard on several occasions over the last year. Following Turkey’s illegal drilling in the Republic of Cyprus’ Exclusive Economic Zone (EEZ) in May, the Federation’s coordinated, decisive and clear representations to Her Majesty’s Government resulted in the then Europe Minister, Sir Alan Duncan, clarifying UK Government policy vis-a-vis Turkey. In response to an Open Letter from the Federation he confirmed that the UK Government “oppose their [Turkey’s] plans to drill”, and urged “dialogue, in accordance with International law” to be used, not “force, militarisation or coercion”. Moreover, statements in support of Cyprus’ sovereign rights were received from the Labour Party, Scottish National Party, Liberal Democrats, Green Party, Change UK-The Independent Group and All-Party Parliamentary Group for Cyprus, as well as a number of individual parliamentarians.

On the tragic 45th anniversary of Turkey’s illegal invasion of Cyprus, in July this year, our community sent a clear message to their elected Members of Parliament that Turkey needs to take its hands off Cyprus and end its occupation of over a third of the island. Our #HandsOffCyprus campaign saw Federation representatives visit community events to talk to UK Cypriots across the country. As a result of the campaign, over 58% of MPs (vs. 41% last year), across the UK, received emails from their constituents calling for Turkey to take its hands off Cyprus (see map below of constituencies where MPs received emails). We also held our annual parliamentary reception bringing together MPs and the UK Cypriot community to show support for a free, united Cyprus.  Several MPs also recorded video messages for our community on the anniversary of the illegal invasion.

Thank you to everyone who took the time to participate in these campaigns. We’ve shown that when we are united and make our voice heard, we can make a real difference. However, I’m confident that we can achieve even more. 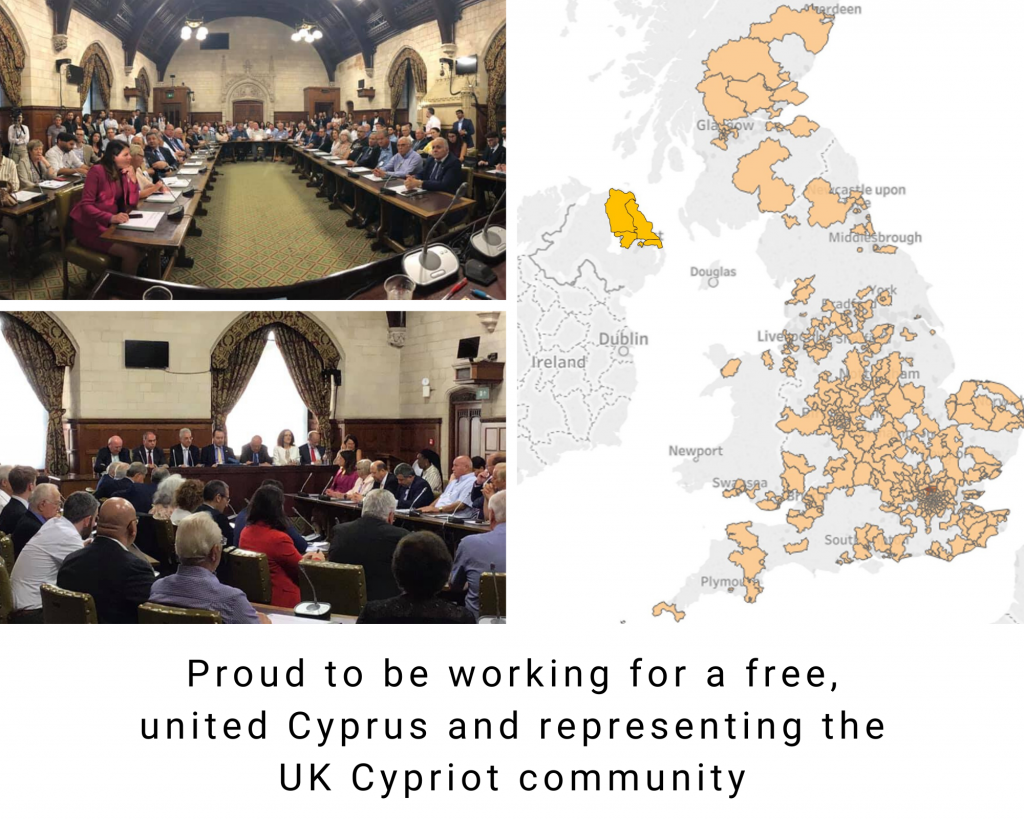 We have also found new ways to raise awareness about the impact of the ongoing occupation. Earlier this year I gave evidence to the Foreign and Commonwealth Office review on Christian persecution where I spoke about Turkey’s ongoing persecution of Christian’s in the occupied northern part of Cyprus. I was pleased that the final report highlighted the “Confiscation of church properties, attack[s] on churches and properties…and access for worship is severely restricted…in the northern area of Cyprus currently under Turkish occupation”. The Foreign Secretary has committed to implementing the report’s recommendations.

As well as advocating on the Cyprus issue, we have also actively engaged with our community on issues of importance that are much closer to home – namely the process of obtaining Cypriot citizenship, given that the UK is leaving the European Union. The Cyprus High Commission in the UK and Ministry of Interior have taken significant steps to improve the application process and have significantly increased processing capacity. I would like to thank the Cyprus High Commissioner, Foreign Minister, Minister of Interior and Presidential Commissioner for their continued support and cooperation on this issue. If you are considering applying for Cypriot citizenship click here for more information.

This year we have also taken steps to continue harnessing all the talents of our diaspora by hosting the 1st UK-Cypriot Diaspora Economic Diplomacy Roundtable, under the Chairmanship of Cypriot Foreign Minister Christodoulides. The roundtable brought together successful Cypriots across all professions in the UK in a confidential, results-oriented forum to develop a strategic and comprehensive approach to Cypriot economic diplomacy in the UK, as well as advance the UK Cypriot diaspora. 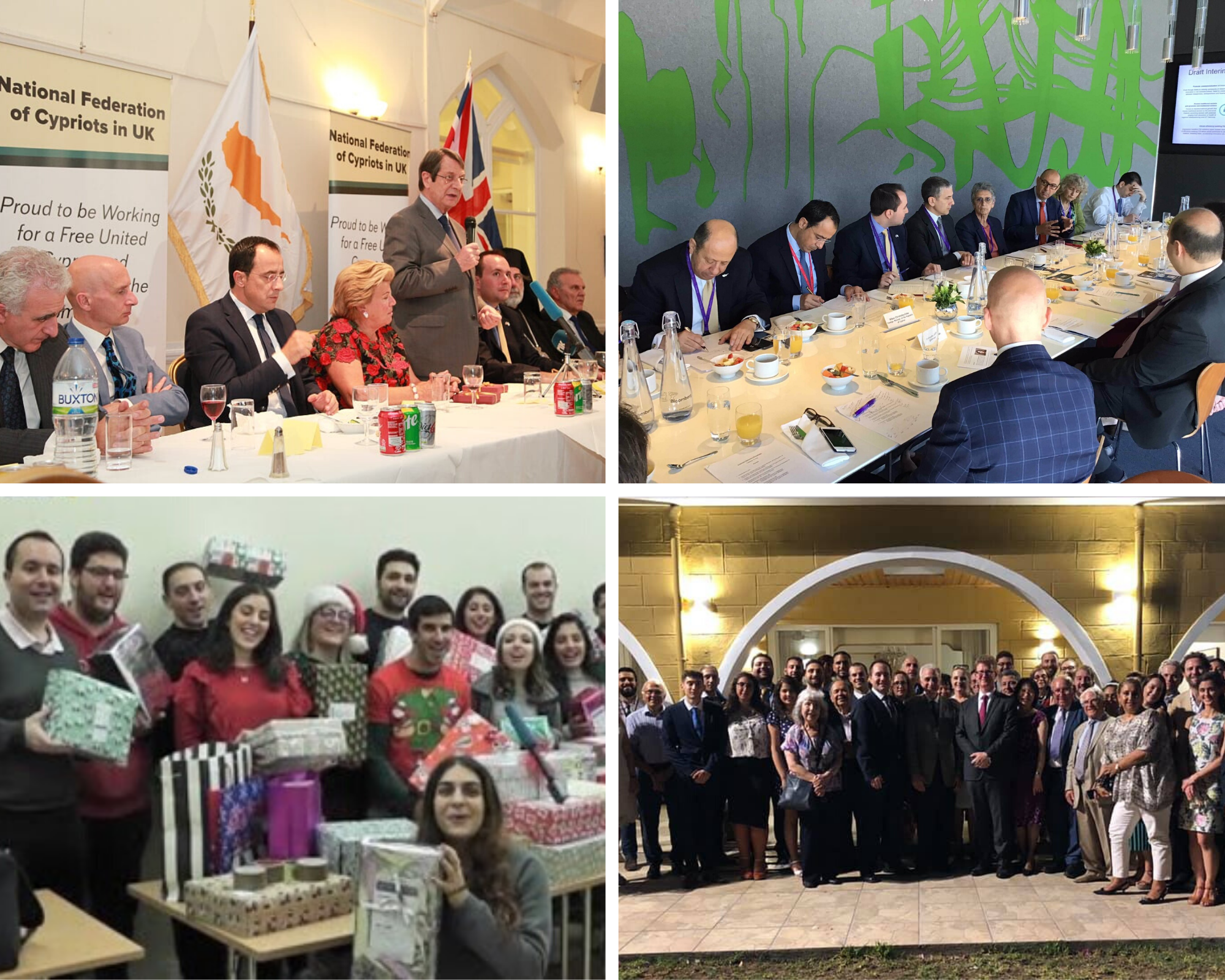 At this time of year, our minds turn to those less fortunate than ourselves. It is often said that the mark of a society is how it treats those who are most vulnerable. It is for this reason that I am particularly proud of our community’s charitable efforts. The Rizokarpasso Association in the UK sent a generous Christmas present to every enclaved child in Rizokarpasso and NEPOMAK UK, our youth branch, coordinated UK Cypriots in London, Birmingham, Manchester, Leicester, Cardiff and Mansfield to send 1200 presents to less fortunate children in Cyprus. If you’re a young UK Cypriot and want to get involved, or meet other young people from around the UK & the globe, then come along to the Opening Ceremony of the NEPOMAK Executive Committee meeting on Friday 27 December. Former cabinet minister and prominent UK Cypriot Lord Adonis will be the guest speaker (amongst others).

Our minds also turn to those who we tragically lost over the course of the year. This year, we sadly lost two individuals in particular – former President Christofias, and Archbishop Gregorios. Both were proud Cypriots that shaped the destiny of our people whether on the island, or in the UK. May their memory be eternal.

These are just a small snippet of our activities and those of our 80+ member organisations over the last 12 months. Whilst I’m proud of our achievements this year, we all need to re-double our efforts as we write next year’s chapter in our history. 2020 marks the 46th anniversary of the illegal invasion of Cyprus by Turkey and we should spare a thought this Christmas for those who gave their lives for the freedom of our beloved Cyprus, refugees of the invasion, the enclaved and those who are still missing from the invasion in 1974. More than ever before, we must look at what we can all do differently – whether that is opening a dialogue with your local MP about Cyprus; actively participating in the Federation’s email campaigns; engaging with the political party that you support; or donating to support our activities. We must be united and stay the course and honour the promises to our parents, grandparents, and children to deliver freedom for Cyprus in line with UN resolutions, High Level Agreements, International Law and the EU acquis.

Let’s make 2020, the year that we all renew our campaign and commitment for a free, united Cyprus and continue to collectively advance and promote our UK Cypriot community. 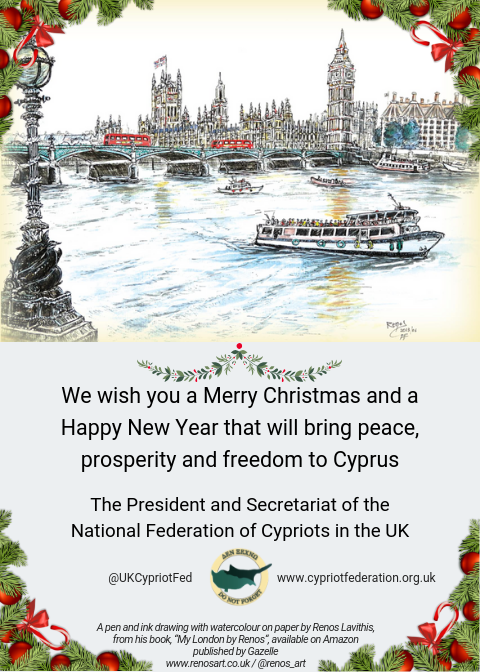