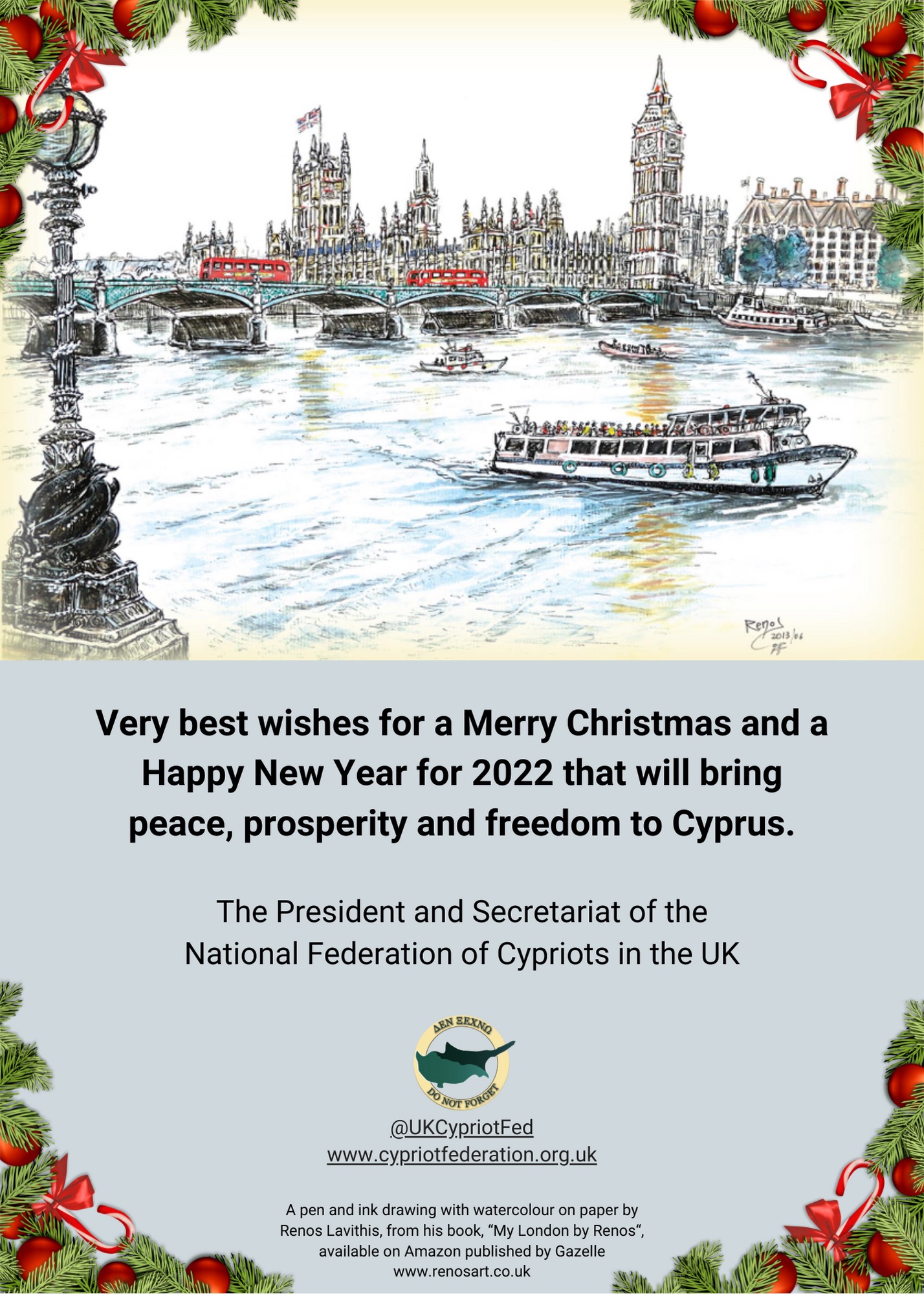 At the end of another difficult year for our community, we wish you a very Merry Christmas and a Happy New Year for 2022.

At this special time of year, my thoughts and prayers are with those who have lost loved ones over the last 12 months. We have sadly lost many brilliant and beloved members of our community and wider society. As we continue to deal with the consequences of the COVID-19 pandemic, I would really urge all in our community to get the COVID vaccination, as well as the booster dose, when you are called for it, to protect ourselves and our loved ones.

This time of year is an opportunity for us all to reflect on the challenges that we’ve faced and the opportunities that await us in the new year. We’ve continued to work hard for our community this year to advocate for a free, united Cyprus, to keep our community well connected during the pandemic and to advance our community.

ADVOCATING FOR A FREE, UNITED CYPRUS

Sadly this year, Turkey and Turkish Cypriot leader repeatedly undermined prospects for a resumption of Cyprus issue negotiations by publicly calling for a solution that falls outside the internationally accepted UN framework. Their calls for the permanent partition of Cyprus are completely unacceptable and have been opposed by the international community. Indeed, we coordinated a statement with groups representing all communities of the island, to make clear that the only acceptable solution is a federal, reunited Cyprus. Throughout the year, we have continued to maintain close correspondence with the Foreign, Commonwealth and Development Office, Opposition Parties, the All-Party Parliamentary Group (APPG) for Cyprus and individual MPs to help advance our just cause.

We had hoped there may be some steps taken towards the resumption of talks when the UN Secretary General invited President Anastasiades, Turkish Cypriot leader Ersin Tatar, then British Foreign Secretary Dominic Raab, Greek Foreign Minister Nikos Dendias, and Turkish Foreign Minister Mevlut Cavusoglu to Geneva in April for an informal meeting to exchange their viewpoints. However, any optimism soon faded as the UN Secretary General explained that the Turkish side were seeking a solution outside of UN parameters, and therefore there was “not enough common ground” for the resumption of substantive negotiations. Ahead of the informal meeting, we urged Foreign Secretary Raab to seize the opportunity to make a difference for Cyprus with 5 clear action points. 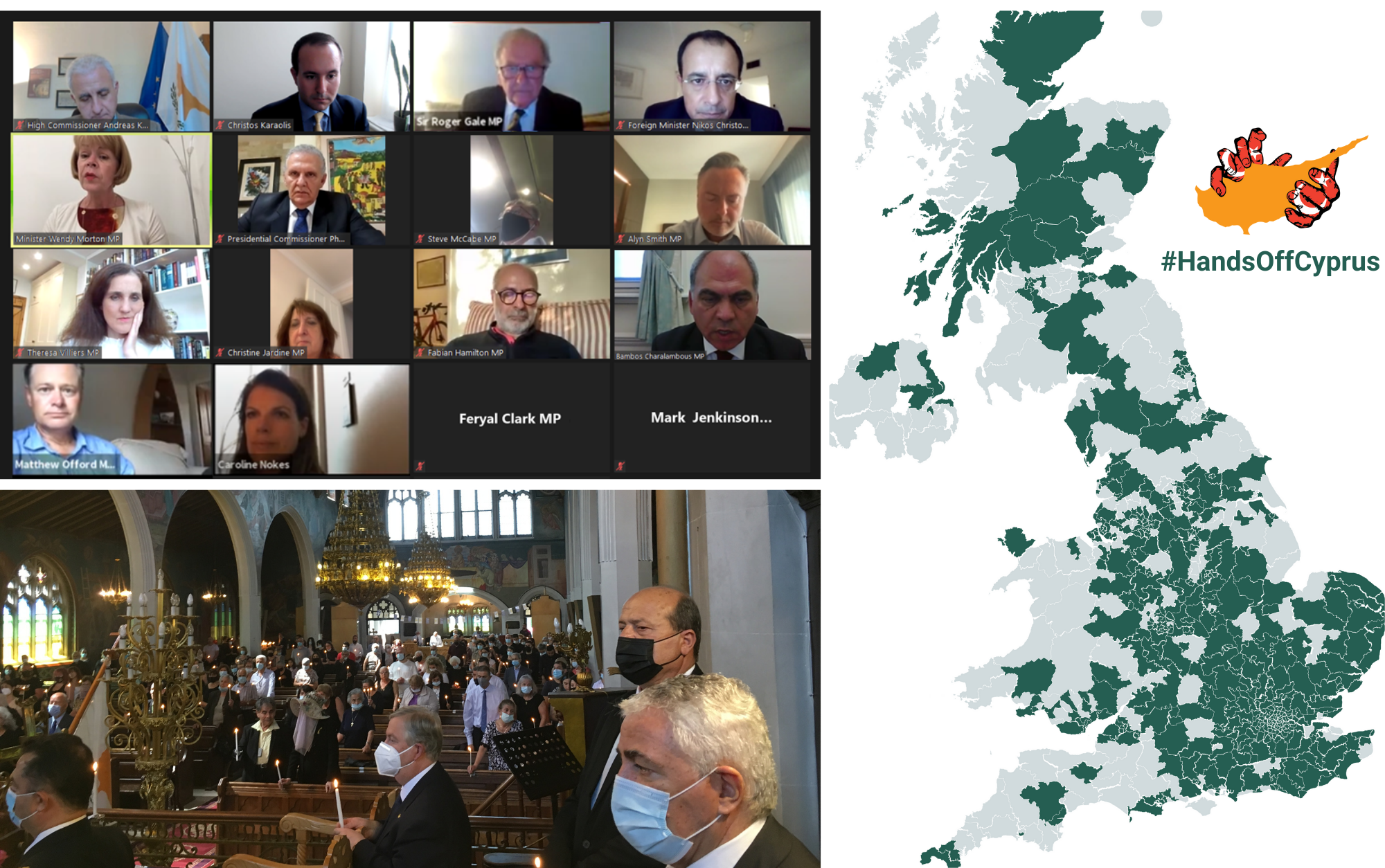 In run up to the 47th anniversary of Turkey’s illegal invasion of Cyprus in 1974, we, once again, ran our annual #HandsOffCyprus email campaign. This year our message focussed on our diaspora’s objection to Turkey’s unacceptable partition plans and thousands of UK Cypriots contributed by writing to their local MP. As a result, over 73% of MPs were contacted by their constituents about the Cyprus issue. I’d like to thank everyone who participated in the #HandsOffCyprus e-campaign. We also marked this tragic anniversary with a virtual event organised with the APPG for Cyprus at which Cypriot Foreign Minister Nikos Christodoulides gave an update on the latest Cyprus issue developments; the Minister for European Neighbourhood and the Americas, Wendy Morton MP, spoke about the strength of UK-Cyprus relations and the importance of finding a solution based on “the existing parameters”; and Presidential Commissioner Photis Photiou spoke about the ongoing humanitarian tragedy of the missing persons issue. Sir Roger Gale MP, Chair of the APPG for Cyprus; Fabian Hamilton MP, Shadow Minister for Peace and Disarmament; Alyn Smith MP, SNP Foreign Affairs Spokesperson; Christine Jardine MP, Liberal Democrats; and Bambos Charalambous MP and Theresa Villiers MP (both APPG for Cyprus Vice-Chairs) also addressed the event. In addition, along with the Archdiocese of Thyateira and Great Britain, we organised a memorial service, officiated by His Eminence Archbishop Nikitas, to commemorate the memory of those who sacrificed their lives defending Cyprus in 1974 and the missing persons of Cyprus.

On 20 July, the anniversary of the invasion, we were all deeply saddened and infuriated by President Erdogan and Ersin Tatar’s decision to take steps towards illegally ‘opening’ part of the fenced off area of Varosi, Famagusta. The international community condemned this move, and there was a strong UN Security Council Presidential Statement. UN Security Council resolutions on Varosi (notably 550, 789 and 2561) are unequivocally clear, and Turkey should respect these.

In early November, I accompanied a delegation of 10 MPs from the All-Party Parliamentary Group (APPG) for Cyprus on a visit to Cyprus. The 10 MPs were Carolines Nokes, Bambos Charalambous, Geraint Davies, Caroline Dinenage, Fabian Hamilton, Mark Jenkinson, Gagan Mohindra, Anum Qaiser-Javed, Catherine West, and Mike Wood. During the trip, the MPs met with Cypriot political leaders to discuss the latest Cyprus issue developments and how to further strengthen ties between the UK and Cyprus. They also witnessed the ongoing consequences of the illegal Turkish invasion, first-hand.

As always, we are extremely grateful to the Parliamentarians who have stood up for Cyprus throughout 2021 by asking questions of HM Government in Parliament, engaging with the APPG for Cyprus, or simply helping behind the scenes.

I was also proud to see the UK Cypriot diaspora make its voice heard on 15th November, on the anniversary of the illegal ‘unilateral declaration of independence (UDI)’ by the occupation regime in the northern part of Cyprus. Over 250 people amassed opposite the Turkish Embassy in London to condemn the ‘UDI’ and call for a free, united Cyprus at the Federation’s annual protest. We also coordinated a protest with some of the Federation’s member associations outside 10 Downing Street in August. 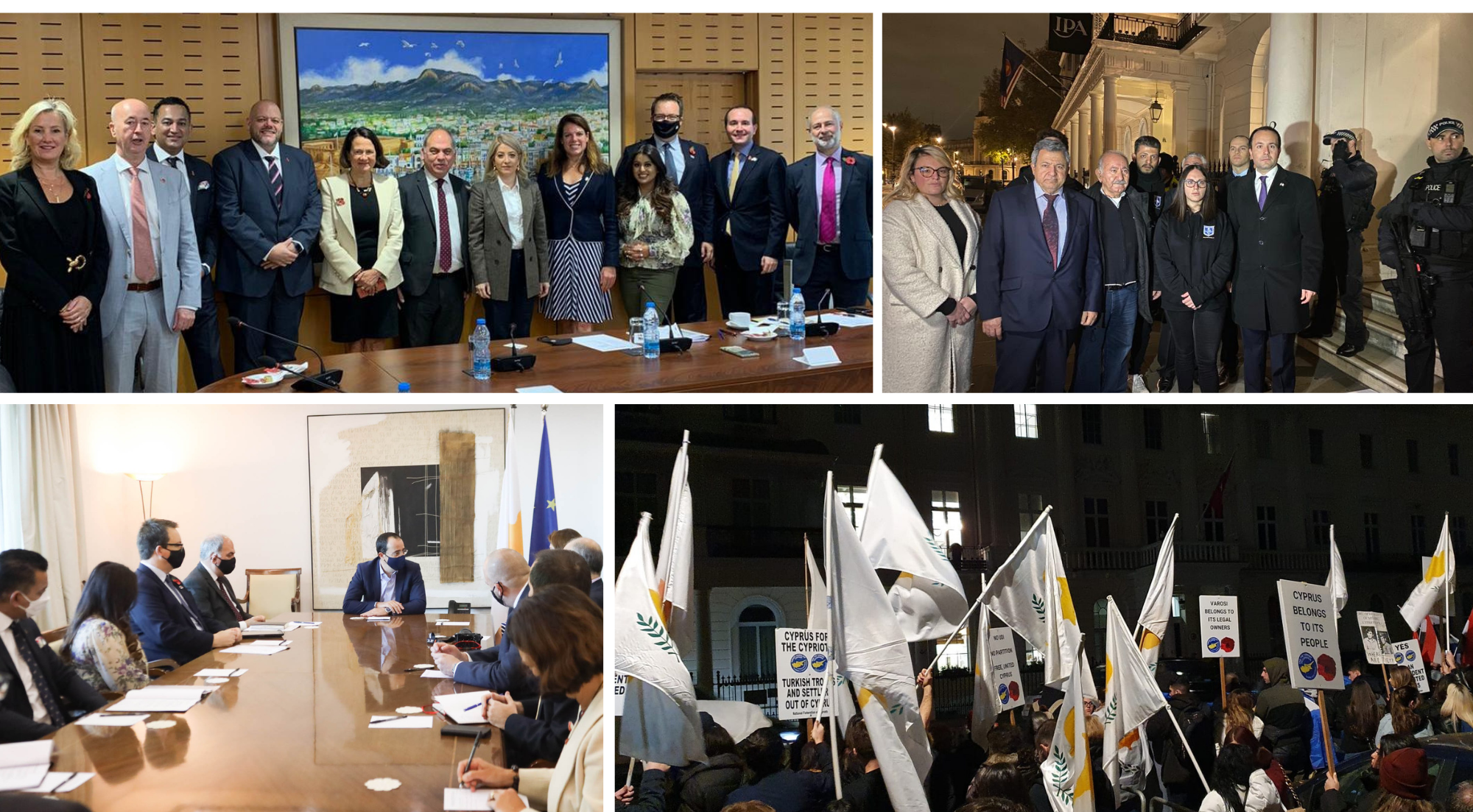 PROUDLY REPRESENTING AND ADVANCING OUR COMMUNITY

As we all remained at home due to the ongoing lockdown at the start of the year, we organised an online series of monthly “In conversation with…” interviews with some of the most prominent figures in our community. Our Guests included Professor Kypros Nicolaides, Theo Paphitis, Dame Janet Paraskeva, John Christodoulou, Dr Linda Papadopoulos, and Tom Toumazis. We are incredibly proud of these successful UK Cypriots and we hope that these interviews were inspiring and insightful to many.

As the COVID-19 vaccination began to be rolled-out in the UK, we urged all UK Cypriots to get the vaccine when offered to them. Lord Adonis and Theo Paphitis recorded special video messages on our behalf to help spread the message, and we released an informative statement about the vaccine with the help of the Cyprus Medical Society UK.

We also continue to promote mentoring and career development opportunities for UK Cypriots of all ages, industries and experiences through our UK Cypriot Professionals Network (UKCPN) scheme. Over 150 UK Cypriots have taken part already and we’re currently in the process of matching our second round of new mentors and mentees.

As travel opened up in the second half of the year, we, once again, met with Cypriot Government officials discuss issues of importance to our diaspora. Notably, in September, Presidential Commissioner Photiou visited for a full week of engagements and, in November, Interior Minister Nicos Nouris met with the Federation’s Secretariat.

This year we’ve also enhanced our cooperation with other UK-based diasporas. In September, we met with the Board of Deputies of British Jews to discuss opportunities for further collaboration. In November we hosted a roundtable discussion with the Armenian National Committee UK, Egyptian Council in the UK, and the Kurdish Assembly of Britain who we have worked with in the past on areas of mutual interest.

As the National Federation, we remain honoured to serve our wonderful diaspora and will continue to build on 2021’s successes as we enter a new year. Whilst I’m proud of our achievements this year, we all need to re-double our efforts as we write next year’s chapter in our history. More than ever before, we must remain united and look at what we can all do differently for our diaspora – whether that is opening a dialogue with your local MP about Cyprus; actively participating in the Federation’s campaigns; or engaging with the political party that you support.

Once again, thank you for your incredible collective support.