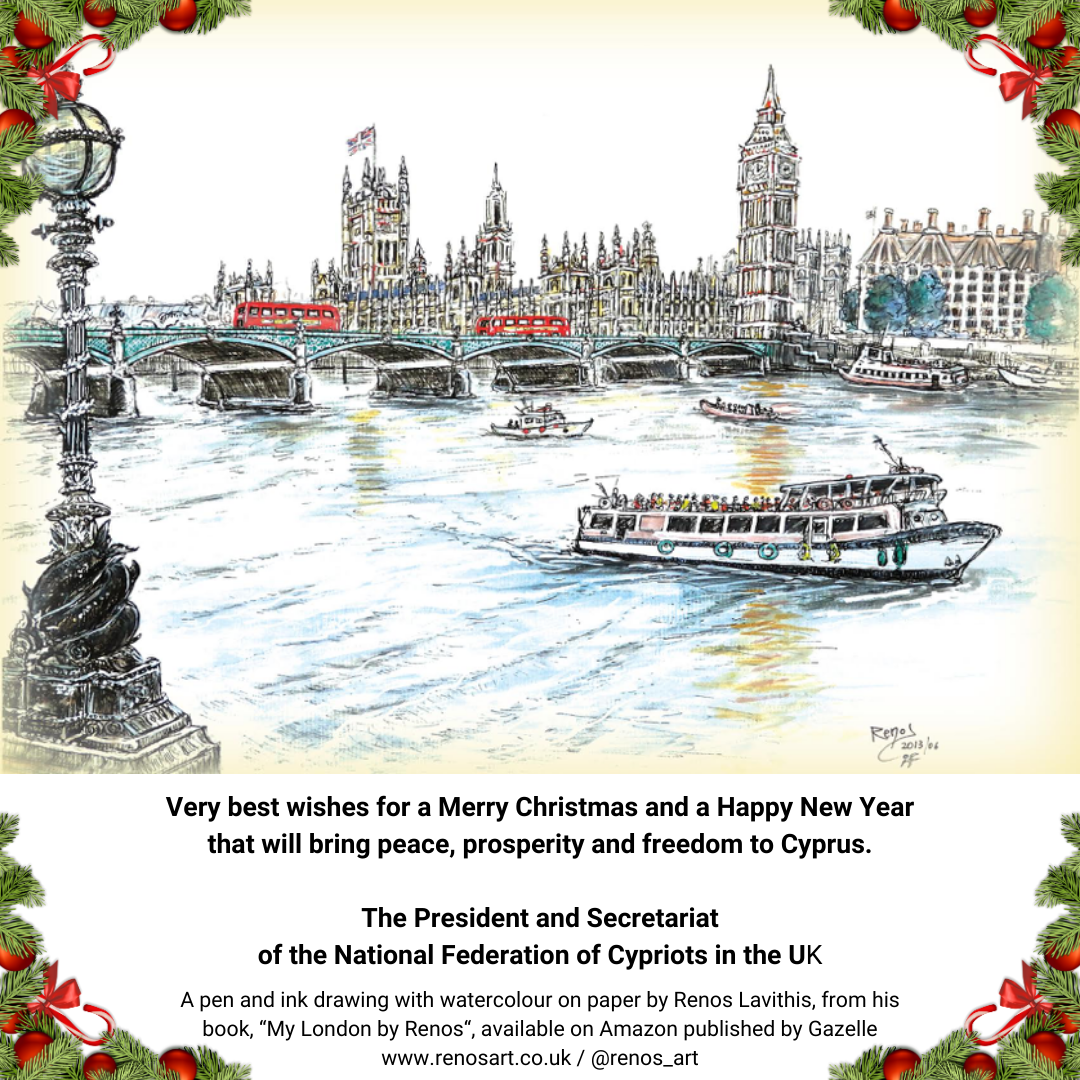 At the end of an immensely challenging year for the UK, Cyprus and indeed the rest of the world, I’d like to take this opportunity to wish you and your loved ones a happy and healthy Christmas and New Year. This year’s Christmas celebration will be different for all of us, so as you celebrate the festive season, please put the wellbeing of your family first as we continue to struggle with the COVID-19 pandemic.

As with the rest of society, our community’s regular calendar of events has been disrupted this year, but it has been heart-warming to see new initiatives and digital events taking place, to ensure our community stays connected during the pandemic.

Click here to read a Greek version of our Christmas message.

Getting through COVID-19 together

In response to the UK Government’s first ‘stay at home’ order back in March, we launched our community information and support portals, along with a variety of initiatives to support our diaspora through the pandemic, working in close cooperation with the Cyprus High Commission in the UK and the Presidential Commissioner for Diaspora Cypriots. When travel to Cyprus was suspended, under the auspices of the Ministry of Foreign Affairs of the Republic of Cyprus and with the support of Marathon Foods UK, we delivered over 4,500 free food packages to Cypriot students who could not return to Cyprus. We also distributed over 600 free food packages to elderly and vulnerable members of our community, thanks to the generous sponsorship of John Christodoulou, founder of the Yianis Christodoulou Foundation. In addition, a network of 60 volunteers from NEPOMAK UK, our youth branch, helped collect shopping, medicines and other essential supplies for the elderly and vulnerable in our community.

We also addressed important and timely issues such as looking after your mental wellbeing during lockdown with practical advice and insights from top psychologist Dr Linda Papadopoulos. Furthermore, we interviewed the inventor of the rapid COVID-19 test, Professor Chris Toumazou, in the weeks before the Government purchased thousands of his DNA Nudge rapid test kits.

The pandemic also triggered the formation of a new Federation member association, the Cyprus Medical Society UK, to bring together Cypriot doctors and medical students in the UK. We are proud to have worked with this society and the Cyprus High Commission in the UK to establish a community medical telephone helpline to provide advice and support to our diaspora through the pandemic.

We’d like to take this opportunity to thank all the healthcare workers, volunteers, teachers, businesses and charities that have worked so hard to make a difference throughout this pandemic.

Celebrating the 60th anniversary of the Republic of Cyprus

The UK Government, Labour Party, Liberal Democrats and the All-Party Parliamentary Group (APPG) for Cyprus all provided us messages reflecting on the achievements of the Republic of Cyprus and its strong bilateral relations with the UK.

The President of Cyprus and Presidential Commissioner of Cyprus thanked the diaspora for standing beside the Republic of Cyprus through the difficult challenges that the country has faced since 1960.

Advocating for a free, united Cyprus

As well as dealing with the immediacy of the challenges posed by COVID-19, we have continued to advocate for a free, united Cyprus and continued to represent our community’s views at the very highest levels.

Despite the pandemic, Turkey has carried out countless illegal and aggressive actions against Cyprus throughout the year. This year saw Turkey’s seventh illegal drilling attempt in Cyprus’ Exclusive Economic Zone (EEZ), as well as threats and provocative statements from the Turkish Government. We engaged with the UK Government, Opposition, Parliamentarians and the APPG for Cyprus on these issues throughout the year. Significantly, the UK has just passed regulations to transpose the EU sanctions against Turkey over its actions in the Eastern Mediterranean, after the UK-EU transition period ends on 31st December.

For UK Cypriots, many of whom are refugees from Turkey’s invasion in 1974, the decision by Turkey and the occupation regime to illegally ‘open’ Varosi was particularly heart-breaking. In response to this, we launched an online email campaign that resulted in ~3,500 emails being sent to Foreign Secretary Dominic Raab MP, in just 3 days. In response to our own letter, Minister Wendy Morton expressed the UK Government’s support for the UN Security Council Presidents statement “expressing deep concern regarding the announcement, and calling for its reversal.” She also stressed that the British Government “continues to be a strong supporter of a comprehensive, just and lasting settlement of the Cyprus issue, based on the internationally accepted model of a bizonal, bicommunal federation.” The Labour Opposition, in a statement to the Federation, via Fabian Hamilton MP, Shadow Minister for Peace and Disarmament, described Turkey’s plans “inflammatory and detrimental to the ongoing diplomatic efforts to reach a lasting solution on the island of Cyprus” and urged the UK Government to “play a leading part in ensuring UN resolutions are upheld”.

Given Turkey’s illegal actions against almost all of its neighbours, we have collaborated with other UK-based diaspora organisations such as the Armenian National Committee UK, Kurdish Peoples Democratic Assembly of Britain, and Egyptian Council UK to highlight the consequences of Turkey’s actions on all its neighbours. We jointly wrote to the Secretary of State for International Trade expressing our deep concern about a UK-Turkey post-Brexit trade deal and urging the UK Government to hold Turkey fully accountable for its illegal actions, as part of these negotiations.

We marked the tragic 46th anniversary of Turkey’s invasion of Cyprus with our annual parliamentary reception for Cyprus, albeit virtually instead of in the Grand Committee Room, this year. We were joined by H.E. the Minister of Foreign Affairs of the Republic of Cyprus, Nikos Christodoulides, as well as Government and Shadow Ministers, the APPG for Cyprus, and Parliamentarians.

On 15th November, the 37th anniversary of the illegal ‘UDI’ of the secessionist regime in the occupied area, we co-hosted a webinar with EFEK UK about the future of the Cyprus issue given recent developments. The guest speakers were Foreign Minister Christodoulides and all six Cypriot Members of the European Parliament. The Chair of the APPG for Cyprus, Sir Roger Gale MP, and the Shadow Minister for Peace and Disarmament, Fabian Hamilton MP, also recorded messages in which they both criticised Turkey’s provocations and called for the resumption of talks.

Before the COVID-19 pandemic struck the UK, we hosted H.E. the Minister of the Interior of the Republic of Cyprus, Nicos Nouris, to discuss initiatives to simplify and speed-up the application process for Cypriot citizenship and the importance of Cypriot nationals in the UK registering for the EU Settled Status Scheme. As part of the Minister’s visit we launched a photographic exhibition of the recent history of Cyprus by Adonis Christoforou that was brought to the UK by the Press & Information Office of Cyprus (PIO). We also hosted H.E. the Minister of Education, Culture, Sport and Youth, Prodromos Prodromou, with whom we discussed issues relating to our community Greek schools.

As the pandemic has progressed, hundreds of thousands of workers have lost their jobs, with young people hit particularly hard. Therefore, we are proud to have established the ‘UK Cypriot Professionals Network’ (UKCPN) to provide mentoring, CV reviews, networking opportunities and other helpful resources, for Cypriots in the UK of all levels and across multiple industries. This initiative is in association with Cypriots in the City & the Cyprus Medical Society in UK and is supported by the Presidential Commissioner for Diaspora Cypriots and the Government of the Republic of Cyprus. If you haven’t already registered for this growing network at www.cypriotfederation.org.uk/ukcpn, please do so. We have recently released a video where a number of successful UK-Cypriots (across a variety of sectors including politics, medicine, civil society, start-ups, banking and media) talk about how they have benefitted from mentoring to accelerate their careers. Click here to watch this inspiring video.

These are just a small snippet of our activities and those of our 85+ member organisations over the last 12 months. Whilst I’m proud of our achievements this year, we all need to re-double our efforts as we write next year’s chapter in our history, with both Brexit and the social & economic consequences of the COVID pandemic on the horizon. 2021 also marks the 47th anniversary of the illegal invasion of Cyprus by Turkey and we should spare a thought this Christmas for those who gave their lives for the freedom of our beloved Cyprus, refugees of the invasion, the enclaved and those who are still missing from the invasion in 1974. More than ever before, we must look at what we can all do differently – whether that is opening a dialogue with your local MP about Cyprus; actively participating in the Federation’s email campaigns; engaging with the political party that you support; or donating to support our activities. We must be united, stay the course, and honour the promises to our parents, grandparents, and children to deliver freedom for Cyprus in line with UN resolutions, High Level Agreements, International Law and the EU acquis.

Let’s make 2021, the year that we all renew our campaign and commitment for a free, united Cyprus and continue to collectively advance and promote our UK Cypriot diaspora.